Home > ChinaExpos & Events > Expo 2021 Yangzhou: Harmony between man and nature in the middle of a pandemic

Expo 2021 Yangzhou: Harmony between man and nature in the middle of a pandemic 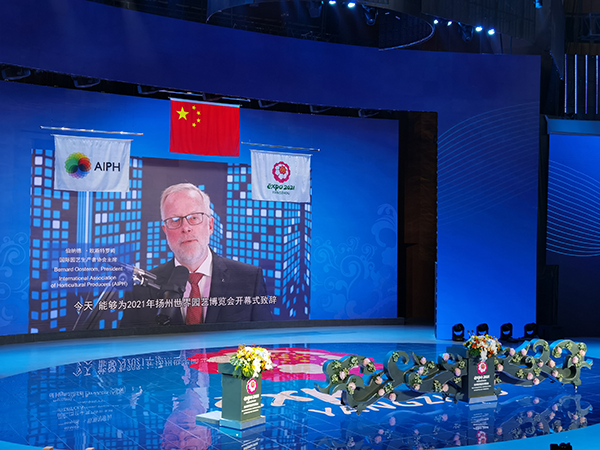 Expo 2021 Yangzhou opening ceremony, in April. AIPH President Bernard Oosterom had to address the audience via video link, due to the pandemic. These travel restrictions also hampered, but did not deter, the closing ceremony in October.

So many people worked so hard over five years to make Expo 2021 Yangzhou happen. Despite making the unimaginable materialise and bringing success to the event, the closing formality of this Expo on 8 October was a virtual event. 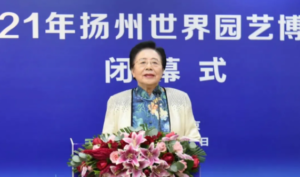 Jiang Zehui, president of the China Flower Association and chairman of the Yangzhou Expo Organizing Committee

The Expo organisers – National Forestry and Grassland Administration, China Flower Association and Jiangsu Provincial Government – had overcome the difficulties and challenges brought on by Coronavirus. Despite the final disruption, this major international horticultural Expo was successful from 8 April for six months.

Expo 2021 Yangzhou was approved by the International Association of Horticultural Producers (AIPH). It was held in the ecological garden park of Zaolinwan Tourist Resort, in the Yangtze River Delta Region of Jiangsu province, of China.

The Yangtze River Delta Region is historically famous for its traditional Chinese gardening techniques and renowned for Penjing (Chinese Bonsai) and beautiful gardens. Since ancient times, the Yangzhou people have attached great importance to a love of growing ornamental plants.

Expo 2021 Yangzhou’s theme was ‘green city, health life’, and this sentiment permeated the Expo with over a thousand educational and sensory activities for all visitors. Innovative technology played a huge part in tracking and keeping the daily 55,000 visitors safe, with a team of more than 600 volunteers on site.

The Expo demonstrated the area’s rich cultivating history, spanning 230 hectares in the Yangtze River Delta Region, arranged to showcase horticulture from five continents of the world, six regions of China and Jiangsu. It contained 1,500 plant species, 27,800 full-crown trees and 770,000-metre squares of low shrubs, all harmoniously arranged. The flower borders were regularly maintained and innovatively changed for each season – spring, summer, and autumn.

Showcasing on a grand scale

Historically, the thousand-year-old city of Yangzhou was an important trading centre at the Silk and Maritime Silk Roads intersection. This Expo participated with horticultural producers from all over the world, creating gardens on site. For example, landscapers recreating capital cities – St Petersburg, Russia; Bangkok, Thailand; Rome, Italy; Fukuoka, Japan. Other participant installations came from international organisations such as INBAR, WGDO, WCCO, and enterprises such as SAIC Volkswagen, Jiangsu Huajian, Hongyue Hongcai. Other themed international gardens such as The Van Gogh Garden from Breda, the Netherlands; Window of Philadelphia, Garden of USA; African’s Djibouti Garden and Australia Blue Mountains.

As the worlds champions for the power of plants, AIPH fully supports the efforts to raise the profile of plants and gardens and highlight the importance they play in making better lives and creating better cities for the future.

AIPH was involved in judging the gardens at this Expo. The Secretary-General Tim Briercliffe said: I feel a great sadness that I have not visited the Expo in person. However, I have been able to spend many enjoyable hours watching the videos and photos of every single garden. For everyone, I saw it made it even more painful that I could not be present to see, touch and smell as you have been able to do.”

In harmony with the land for the Expo legacy

The Expo site located at the west gate of Yangzhou at the junction of Ningyang, in Zaolinwan Tourism Resort, is the largest hilly ecological park in East China. From the drawing board to reality, the organisers relied on the texture of the landscapes, forests and fields, to outline the Expo park, which was the structure of “one axis, two veins, five centres, and eight areas”.

This plan included the International Pavilion, China Pavilion, Opening and Closing Ceremony Pavilion, Yuanye Garden, and Biyun. The five core scenic spots of the village and nearly 30 “gardens in gardens” had different styles and shapes, including the Constellation Garden, the Scholar Garden, the Wooden Garden, the Building Block Garden, and the Rock Garden.

Less than 15 per cent of the Expo installations are permanent buildings. During construction, there was a minimal human intervention and maximum protection of the original ecology, including 28,000 trees. The success of the Expo has brought future infrastructure investment of more than 40 billion RMB into Yizheng’s Central Hilly Eco-belt. This money will help create a brand-new section for the active integration into the Yangtze River Delta canal system and the joint development of rail transport networks between Nanjing-Zhenjiang-Yangzhou.

On the afternoon of 8 October, the closing ceremony of the Expo 2021 Yangzhou was hosted in Beijing and Yangzhou via video connection. 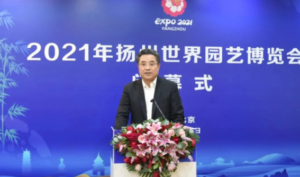 Zhang Wei, director of the Ecology Department of the National Forestry and Grass Administration

Due to current Covid-19 travel restrictions, AIPH had to send a video speech from the Secretary General, Tim Briercliffe.
At the Beijing venue, Liu Dongsheng, deputy director of the National Forestry and Grass Administration; Zhang Wei, director of the Ecology Department of the National Forestry and Grass Administration; Huang Zhengqiu, deputy director, Zhao Liangping; vice president of the China Flower Association, and Zhang Yinchao, secretary general, and, Liu Yuquan, Deputy Mayor of Chengdu.

Liu Dongsheng said in his speech that the successful hosting of the Yangzhou Expo “showcases my country’s traditional horticultural skills, the development of the flower industry, and the world’s latest horticultural results. It depicts a beautiful picture of the harmonious coexistence of man and nature.” He acknowledged that the success of the Yangzhou Expo was not easy to come by. He thanked AIPH’s approval, guidance, support and coordination of Chinese flowers and the Yangzhou Municipal People’s Government, “we have overcome various difficulties and completed the tasks of the exhibition. It will also effectively promote the healthy and sustainable development of the flower gardening industry in Jiangsu Province and my country”. 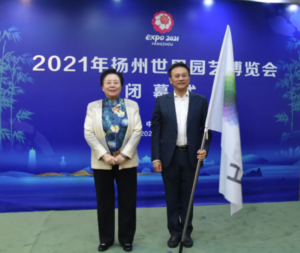 The AIPH flag was ceremoniously presented by Jiang Zehui to Liu Yuquan, Deputy Mayor of Chengdu, in acknowledgement of the forthcoming International Horticultural Exhibition Chengdu 2024.

Pan Xianzhang said that the Yangzhou Expo is “a gift for the centenary of the founding of the Chinese Socialist party”. He underlined that the event had increased domestic and international dialogue that promotes mutual learning and demonstrates effective practices in pursuing harmony between man and nature. It also benefits the Yangzhou people and is conducive to long-term development.

At the ceremony’s close, the AIPH flag was ceremoniously presented by Jiang Zehui to Liu Yuquan for the 2024 Chengdu Expo.

A playlist of gardens at Expo 2021 Yangzhou can be viewed on AIPH YouTube here. 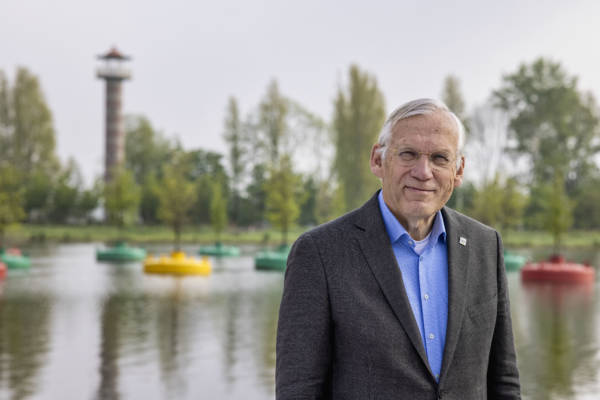 Floriade opens in the Netherlands on 14 April 2022; the AIPH-approved A1 World Horticultural Expo will demonstrate to citizens how…

‘Wholesalers are playing a vital role in China’s floral industry’

The Hainan Free Trade Port (“Hainan FTP”) is currently being planned and constructed in China’s southern island province of Hainan.…