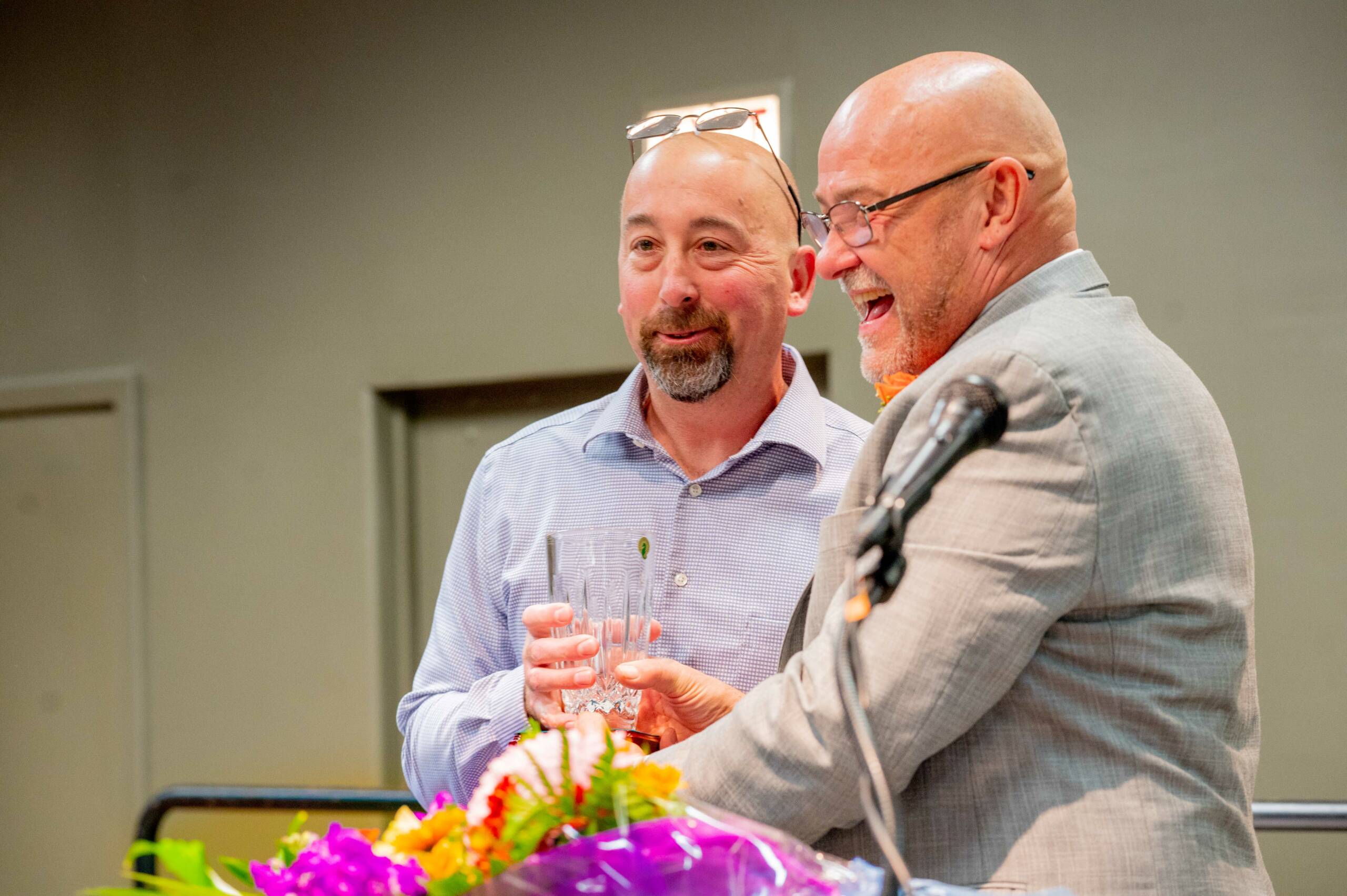 HASLETT, USA: The Great Lakes Floral Foundation Hall of Fame was created to recognise the impact of florists, floral wholesalers and flower importers.

The event was held in the Lincoln room at Kellogg Hotel & Conference Center E. Lansing, MI. The evening started at 6pm with a reception where 80+ attendees enjoyed appetizers, libations and conversation. At 7pm sharp, Foundation Chairman and emcee Jerome Raska, AAF, AIFD, CF, PFCI, welcomed everyone and invited Robbin Yelverton, AAF, AIFD, CF, PFCI, to give the invocation, after which dinner was served.

The inductions began at 8pm with stories of Jim Wilson from Alan Buckley, owner of Norman Smith Enterprises, David Bailys, VP NAPCO and James Wilson, Jim’s Son.  Jerome then presented Jim with his Hall of Fame award.  After receiving his award, Mr Wilson reflected on 50+ years of selling for NAPCO, Norman Smith Enterprises, Davidson Upoff and various other lines. “In closing I want to thank my wife, Sharon, who has stood at my side and helped and encouraged me over the years.  She has been my Secretary, bookkeeper, order writer, and order re- writer at trade shows as the interpreter of my awful penmanship.”

Next, Tony Veer of Mains Importing told a wonderful story of how he got his start 36 years ago and how blessed he’s been to have worked for a great family and have such loyal customers he also considers friends.

Jason, aka Brent Jr., then came to the podium and read a note from his father, Brent, who could not attend. “My Dad started working in the floral industry in 1972, where he worked for Bill Watson of Watson’s Trading in Hillsdale, over time he began representing a few other industry lines.

In fact, at one point, he was a sales rep for 14 different companies. In 1982, Dad and my Mom, Carol, formed Mains Importing; they started in a small office space in downtown Litchfield while renting storage space for products. In 1987 they broke ground at our current location in Hillsdale. Today we are proud to say we have three generations of family working at Mains Importing; thank you to those who have supported Mains Importing over the last 40 years. We are looking forward to another 40!” Jason then graciously accepted the Hall of Fame award on behalf of his father.

The final induction of the evening was bestowed upon Jim Schmidt. Cliff McClumpha, the new owner of Hyacinth House, spoke on working for Jim and his business partner Dave over the last fourteen years and how they both have mentored him and have now entrusted him with purchasing their company.

After being presented with his Hall of Fame award, Jim Schmidt spoke from the heart on how his friendships with industry icons such as Jon Anthony, Frank DeVos and Lucile Belen, to name a few, helped him and Dave grow the business which they started together from scratch in 1975.  He also spoke about the importance of education, and the role Lucile Belen and the Great Lakes Floral Association/Foundation have played in providing classes on floral design and how to make money in the flower business.

The Great Lakes Floral Foundation would like to thank Norman Smith Enterprises (NSE) for their Title Sponsorship of the event. Also, thank you to Teleflora for their Platinum sponsorship and a big Thank You to Hyacinth House and their team for setting up and providing the beautiful décor for the evening.

If you would like to honour one or all three of these industry icons on their induction into the Hall of Fame with a monetary donation, you can do so online via the Foundation tab at www.greatlakesfloralassociation.org.

The Great Lakes Floral Foundation (GLFF) has been established to support and advance the floral industry, its members and the communities they serve. The Foundation meets this responsibility through educational opportunities and community enrichment activities. The GLFF will periodically honour outstanding members of the floral industry who have mentored and inspired their fellow industry members. The Great Lakes Floral Foundation Hall of Fame has been established to record the contributions of those so honoured. The Foundation will support and encourage educational opportunities between the public and design professionals approved by the GLFF board of directors. These programmes will be available at a reasonable charge to nonprofit community organisations. The Foundation will also make available financial assistance to those seeking to become a Certified Florist, such as providing matching funds when candidates purchase their study materials.

For more information, visit the Foundation tab at www.greatlakesfloralassociation.org.