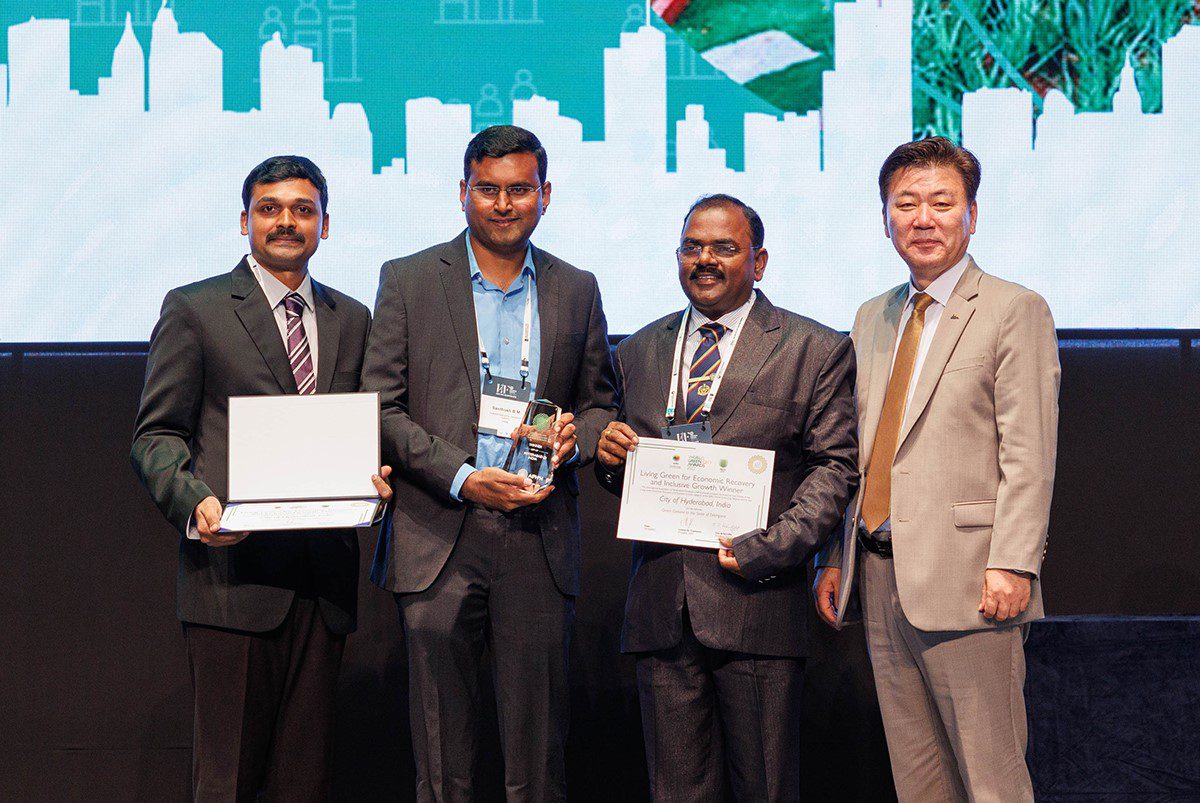 AIPH is proud to announce the winners of the AIPH World Green City Awards 2022. The announcement of the 6 Category Winners and the Grand Winner was made at a dedicated Awards ceremony which took place at a special gala dinner at the IUCN Leaders Forum in the Self-Governing Province of Jeju, Republic of Korea on 14th October 2022.

The city of Hyderabad, India, takes home the highest accolade and most highly coveted award for their winning initiative titled: Green Garland to the State of Telangana.

The Grand Winner was voted by the prestigious and world-renowned jury on the basis of the city’s impact and potential to inspire transformative change as demonstrated in their entry.

The inaugural AIPH World Green City Awards ceremony took place on 14 October 2022 at a dedicated gala dinner held at the IUCN Leaders Forum in the Self-Governing Province of Jeju, Republic of Korea. The Grand Winner was announced from the list of 6 winning cities who all took home the title of “Category Winner” in each of the six award categories.

The City of Hyderabad’s entry stands as a world-class showcase of the power of plants and nature in the urban context. Hyderabad is Mega city (10 million inhabitants) and one of the fastest growing metropolises in India, which is expected to be home to about 19 million residents by 2041.

Telangana Ku Haritha Haram (TKHH), meaning ‘Green Garland to the State of Telangana’ is a flagship programme which has inspired large-scale tree-planting by the Government of Telangana since 2015-16. The programme was established with the aim of increasing the tree cover of the State from the current 24 per cent to 33 per cent of its total geographical area. They surpassed this goal with an ultimate increase of 147 per cent through the initiative.

“AIPH celebrates this fantastic achievement for the city of Hyderabad. We are proud to showcase their inspiring urban greening work. With this global recognition, we can confidently say that Hyderabad is a world leader in nature-oriented approaches to city design, form, and function,” says Mr. Tim Briercliffe, Secretary General of AIPH. “The innovation, ambition, and inspiring action demonstrated in the city’s entry leaves a powerful legacy for other cities from around the world to aspire to.”

Living Green for Health and Wellbeing:

Green Garland to the State of Telangana, City of Hyderabad, India

“The AIPH World Green City Awards recognise inspiring leadership and successful action on the key issues that face cities in being sustainable, and delivering for nature, climate and people,” says Dr Bruno Oberle, Director General of IUCN. “The breadth of action being taken by the winners shows the crucial role healthy ecosystems have in providing the solutions that cities need to thrive far into the future.”

All eligible entries were assessed and scored, and the winners selected through a two-stage judging process. Following the first round of judging by the Technical Panel, a list of 18 finalists was delivered to the Awards Jury. The Jury, in the second stage of judging, was tasked with voting for a winner in each of the six categories, and then selecting the Grand Winner from these six Category winners.

This highly anticipated announcement of the 2022 winners, AIPH and partners bring the inaugural edition of the world’s first global Green City awards to a close. The resounding success of the 2022 edition has set the stage for the AIPH World Green City Awards 2024. AIPH and IUCN also announced a new collaboration to support the 2024 Awards at the 2022 ceremony in Jeju.

The 2024 edition will see AIPH and the growing network of partners recognise and celebrate the work of an even broader variety of inspiring cities from around the world who are champions for the power of plants and nature.

To express your city’s interest in entering and to be informed when entries open for the AIPH World Green City Awards 2024, click here.

To receive the latest news on the AIPH World Green City Awards and other Green City activities, AIPH invites you to subscribe to the AIPH Global Green City Update here