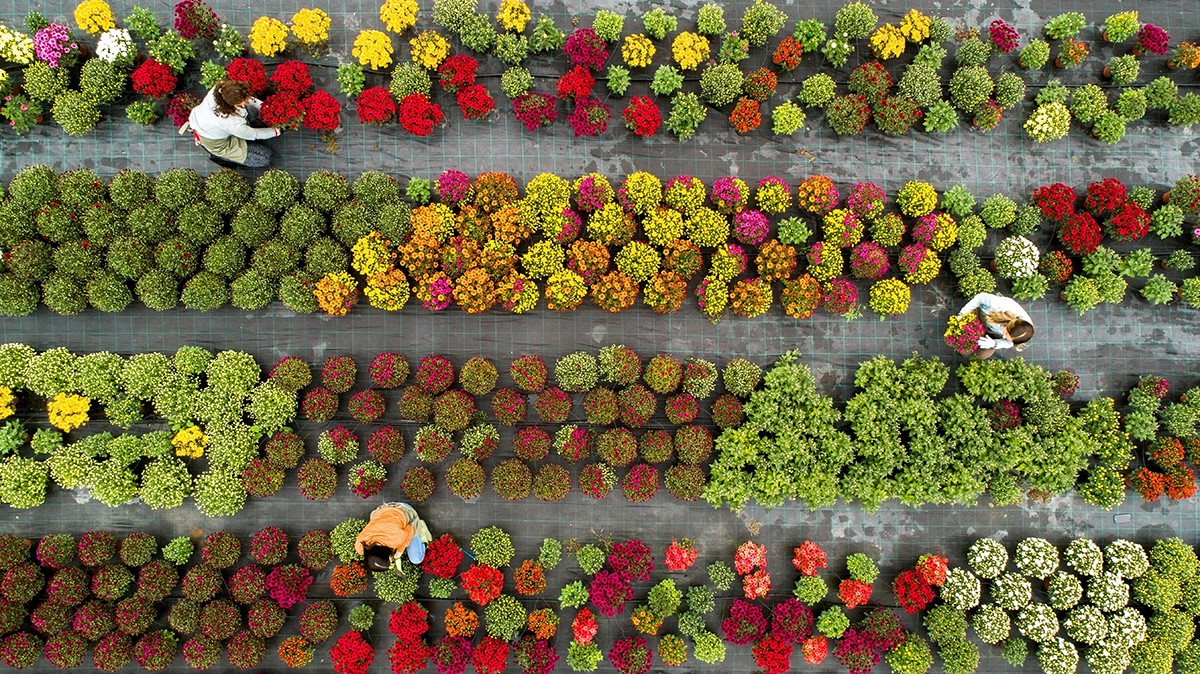 The afternoon of the AIPH Sustainability Conference on 30 September 2021 was dedicated to panel discussions on packaging and the circular economy, growing media, people and marketing.

For some, the pursuit for sustainability isn’t new. UK herbaceous plant grower Derek Taylor began as far back as 16 years ago with a move away from industry-standard plastic pots and marketing materials – but not everyone was ready for it.

The introduction of the coir-fibre pots, which led to his nursery’s Hairy Pot Company trade name, wooden marketing trays and biodegradable labels wasn’t easy, he told AIPH’s conference on sustainability in September. “In 2005 there was little demand so limited options for such alternatives,” he said. “It has taken a lot of time, research and investment to get where we are now.

“Damp and hairy wasn’t clean and shiny. It was a different concept for retailers and although it’s now seen as a positive by our customers we did have to change expectations.”

From initial disillusion about the widespread use of what he saw as unsustainable materials to grow and market an essentially sustainable product, Taylor’s ethos means his whole enterprise is now driven by sustainability, from how the crop is grown, including in peat-free growing medium, to the way the business itself is run.

A change in mindset

With sustainability becoming more of a focus for the ornamentals industry, leading to a greater choice in growing media, pots and packaging, the change of mindset that’s also needed can be a barrier.

“The idea for our Blue programme for a circular economy in plastics wasn’t embraced at first, even within the company,” said Sven Hoping, global sales director for German pot manufacturer Pöppelmann. The post-consumer material it depends on was considered too difficult to handle and process, and intensive trialling was required to get it right.

“We didn’t know when we started in 2016 we’d need such a change in mindset; we thought it was just a question of finding a new material,” he said. “And although it’s up to manufacturers to take the initiative, it needs support by both suppliers and customers.”

Two-thirds of all the pots Pöppelmann sells are now made from 100% recycled – and recyclable – post-consumer plastic.

Because customers are asking about sustainability targets, more companies are addressing the issue, but it’s still hard to find actual solutions, said Elise Wieringa, sustainability manager for Dutch plant supplier Royal Lemkes. The company operates in several countries, each with different supply chains and potential recycling or return mechanisms. That means there can be no single way to create a ‘circular economy’ for items like plastic sleeves or carrier trays, so it’s starting by concentrating on its four largest markets in Europe.

Partnerships between companies along the supply chain, and with non-profit organisations, are increasingly likely to be the industry’s route to greater sustainability.

The first collaboration for Colombia’s flower exporters association’s Florverde Sustainable Flowers certification scheme, established in 1996, was with an organisation collecting waste pesticide containers. It now has 105 certified growers in Colombia and Ecuador and has just drawn up a set of guidelines for a ‘circular economy’ in the floriculture industry in partnership with Colombia’s environment ministry, based on results from pilot projects over the last 25 years.

Environmental impacts, though, are just one part of the sustainability equation.

“Growing media demand is set to rise 400% by 2050,” said Cecilia Luetgebrune, secretary general of trade body Growing Media Europe (GME). “Even without the political pressure now on peat we need to find other materials to meet that demand.”

Growing media suppliers Steve Harper of UK coir specialist Southern Trident and Moritz Böcking of Germany’s Klasmann-Deilmann warned of the risks of relying too much on any one ingredient. “It makes sense economically to look for peat alternatives,” said Böcking, who reported that his company is on track to cut peat volumes in its media by 30% by 2025.

Luetgebrune pointed out that a material unfit for purpose is unsustainable. “It has to be economically viable and socially compliant as well as having a low environmental footprint,” she said. All growing media constituents currently used, however, can be sustainable if sourced responsibly: GME is helping suppliers do just that with a protocol for analysing and calculating the environmental footprints of substrates soon to be published.

As well as wanting to know more about where and how their plants and flowers are grown, customers are increasingly interested in the people who grow them. The Fair Trade International assurance scheme was among the first aiming to protect workers from exploitation but tougher legislation is coming too – measures on human rights are expected in forthcoming EU supply-chain due diligence regulations, the conference heard.

The 70,000 workers employed by 74 flower farms worldwide are now safeguarded by Fairtrade certification, which covers working conditions, health and safety, and living wages. Its global product manager for flowers and plants, Melanie Dürr, said the scheme’s stem price premium generated 8m euros in 2020, money which goes direct to on-farm workers’ groups responsible for deciding how it will be used. Most goes on bursaries for their children’s education, much of the rest on training, although covid health measures have recently accounted for significant sums.

Speakers said more attention should also be paid to workforce food security and the particular challenges faced by female workers.

Richard Fernandes, co-owner of Kenya-based flower grower Marginpar and president of the Kenya Flower Council, believes a focus on people makes sense on every level. “We say we grow people and our people grow flowers: it’s people who make the company successful,” he said. Those unhappy at work are not working to their full potential. Leaders have to unlock that potential by providing skills, a supportive working environment and culture, and showing respect for, and solidarity with, the workforce.

Fair labour standards are now rated as the single most important consideration among those consumers willing to make trade-offs for sustainability, according to research quoted by Charlie Hall, professor of floriculture at Texas A&M University. Forty per cent of the shoppers surveyed rated it as ‘very important’, well ahead of issues such as local sourcing or organic production.

His own research has drilled down into the greenhouse gas emissions of a range of nursery operations to highlight those with the most impact. For example, in container-shrub production, fertiliser, irrigation, the container and the young plant were all significantly emissions-intensive; it was harvest operations, loading and unloading for field-grown trees.

“Just a few production practices account for most of the footprint,” he said.

Hall added that benefits from the ‘lifetime ecosystem’ greatly outweigh these emissions: more carbon is sequestered by trees and shrubs over their lifetime than is emitted in production.

He said the industry should market its sustainability, not least because it can counter some of the negative assumptions made, and evidence was accumulating showing consumers were willing to pay more for products with credible sustainability claims.

The conference heard of other potential benefits from being recognised as a sustainable business.

Membership of Dutch trade association Royal VBW’s Sustainable Florist scheme, for example, has helped those with the accreditation to win tenders from public authorities, said Chris Leichtenberg, one of the first florists to achieve it and now the association’s sustainability specialist.

Derek Taylor pointed to the additional income the Hairy Pot Company earns from three wind turbines that now power the nursery and said the initially higher costs for some items, such as his wooden marketing trays, are offset by longer life expectancy.

“What we’ve done has worked and opened new market opportunities,” he said. “The last three years has seen a big change in consumer attitude and our approach has put us way ahead of potential competitors.”