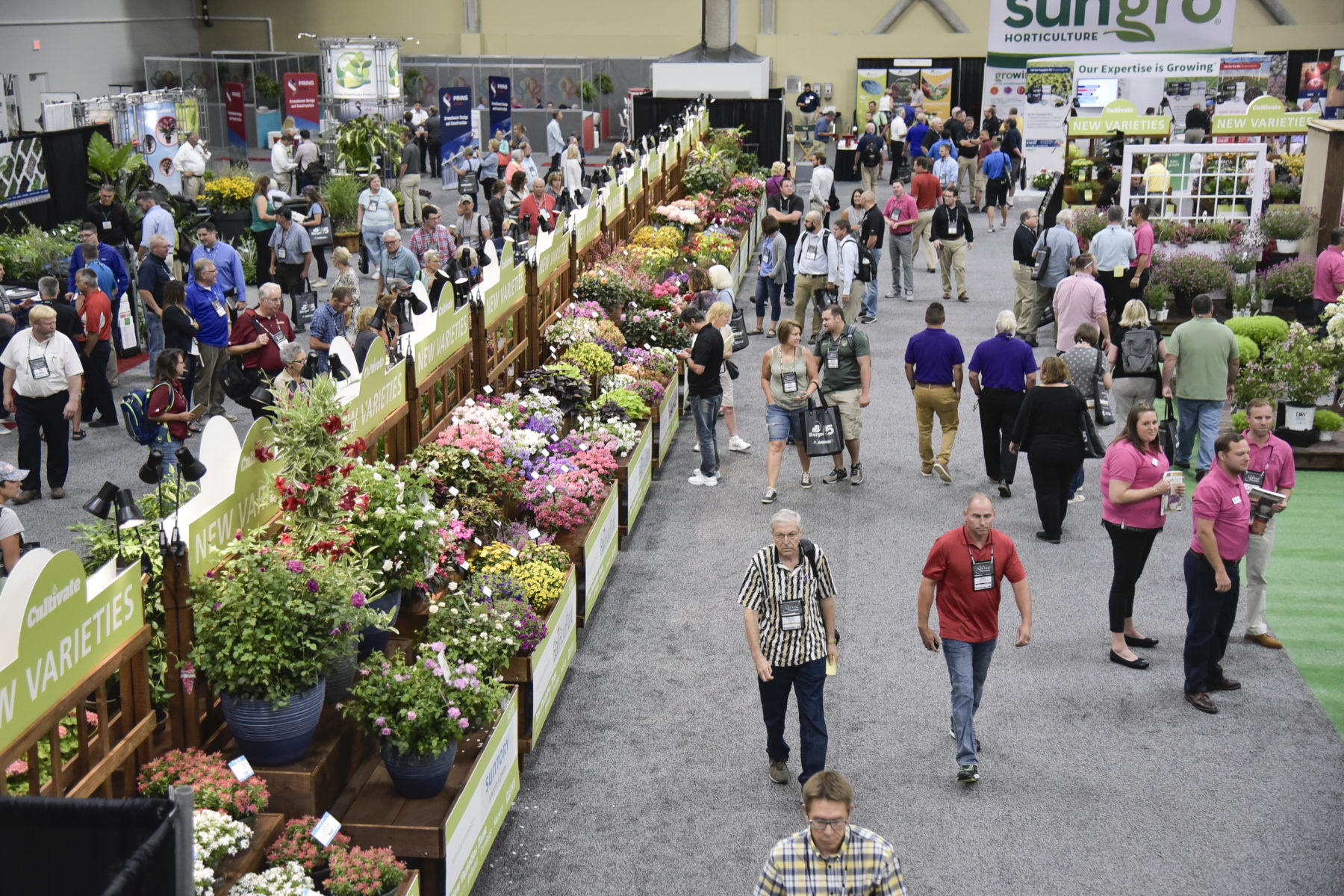 The largest floriculture event on the North American calendar was Cultivate’18, held July 14-17 in Columbus, Ohio.

A smallish city in an idyllic Midwestern state, Columbus is within easy reach (600 miles) of 60% of the U.S. population. And attendees can easily visit growers, retailers, manufacturers and distributors in Ohio, Michigan, Pennsylvania, Indiana and Illinois—some of America’s most important floriculture production states.

But while it is a North America-centric event, Cultivate’18 is the most international of U.S. horticulture shows, with 136 of the 650 exhibitors (20%) coming from some 18 other countries. That is reflected in the size of the Netherlands reception on Sunday evening, where at least 100 Dutch attendees and exhibitors met with representatives of the Dutch embassy, including new Agricultural Counselor Marianne Vaes. (pi1), here discussing trade with Jorg Swagemakers of van Krimpen b.v. (Photo by Caroline Feitel of the Dutch Embassy in Washington, DC). South Korean companies had a large presence along the 3400 and 3500 aisles.

The most-talked-about topic this year? Labor—namely, the lack of it. To help address the labor shortage, equipment manufacturers were showcasing automated solutions—both those that could do the work or those that could make workers more efficient. Cutting sticking remains of great interest; both AutoStix and ISO Group showed off their URC-sticking technology.

Israeli propagator Hishtil (2) showed their own version of an AutoStix-compatible product called RootOStix. It is unique in that it is for rooted cuttings, not URCs. Their packaging technology allows for the shipping of bare-root cuttings, with no substrate, to comply with any phytosanitary rules. Another plus: it eliminates the rooting process. Eventually, it could eliminate an entire step in the production process: the rooting station. www.hishtil.com

Blending your own potting mix

Small growers are being offered tools that let them operate like a large grower. Bouldin & Lawson’s new Low-Profile Incorporator (3) lets a smaller business blend its own potting mix 2 or 4 cubic meters at a time. It can feed any tray or pot filler, and its low height makes it easy to keep loaded with raw materials. www.bouldinlawson.com

Cannabis, either medicinal or recreational or both, is now legal in 23 U.S. states, and many traditional flower growers are exploring the business or are involved in it. That was reflected on the show floor, where we spotted quite a few cannabis-related business and products, most of which were standard equipment, such as structures and LED lighting.

BioTherm’s Toob 02 Infuser and associated products provide a solution for increased dissolved oxygen levels in irrigation water. Systems start with flow rates as low as 2 GPM and are able to scale as high as required. The most popular unit supports up to 18 GPM. The company’s infusion products can be installed in any type of irrigation system and are proven to increase levels of dissolved oxygen providing a broad spectrum of plant health benefits. Installation is simple and well documented, with technical support available before, during, and after installation. www.biothermsolutions.com

OxyFusion is a machine that produces PAA (peroxyacetic acid) on demand. PAA is a disease control treatment and helps prevent biofilm buildup in your irrigation lines. (biosafesystems.com).

Of course, new plant varieties are the main draw for many of the 9,000-plus attendees, and the bigger and better New Varieties display, improved last year when the show floor was expanded, did not disappoint. Here, two Cultivate insiders, Mary Beth Cowardin (foreground) and Stacy Buttari, enjoy the fruits of their labor (7). Mary Beth is Vice President of Marketing and Membership Engagement for AmericanHort, the organization that hosts the show; Stacy is owner and designer with Whitespace, the graphic design firm that creates all the signage and other visual elements of the show.

Vitroplus, a renowned Dutch breeder and propagator of ferns, informed Cultivate attendees about a recent overhaul of its 30-year tissue culture system. The new fern factory is harnessing developments in lighting technology to grow and hardening off fern young plants in multi-tier systems under super-smart LED lights. The production facility offers a controlled environment growing system. Working with lighting company Reveb, Vitroplus grows its plantlets on trolleys fitted with LEDs that maximise available space: production capacity /m3 under low heat generating LED lamps is 20 to 30 times bigger than in a traditional greenhouse. The company’s Ellen Kraaijenbrink told FCI that the company is tapping into a new market: cold hardy ferns.