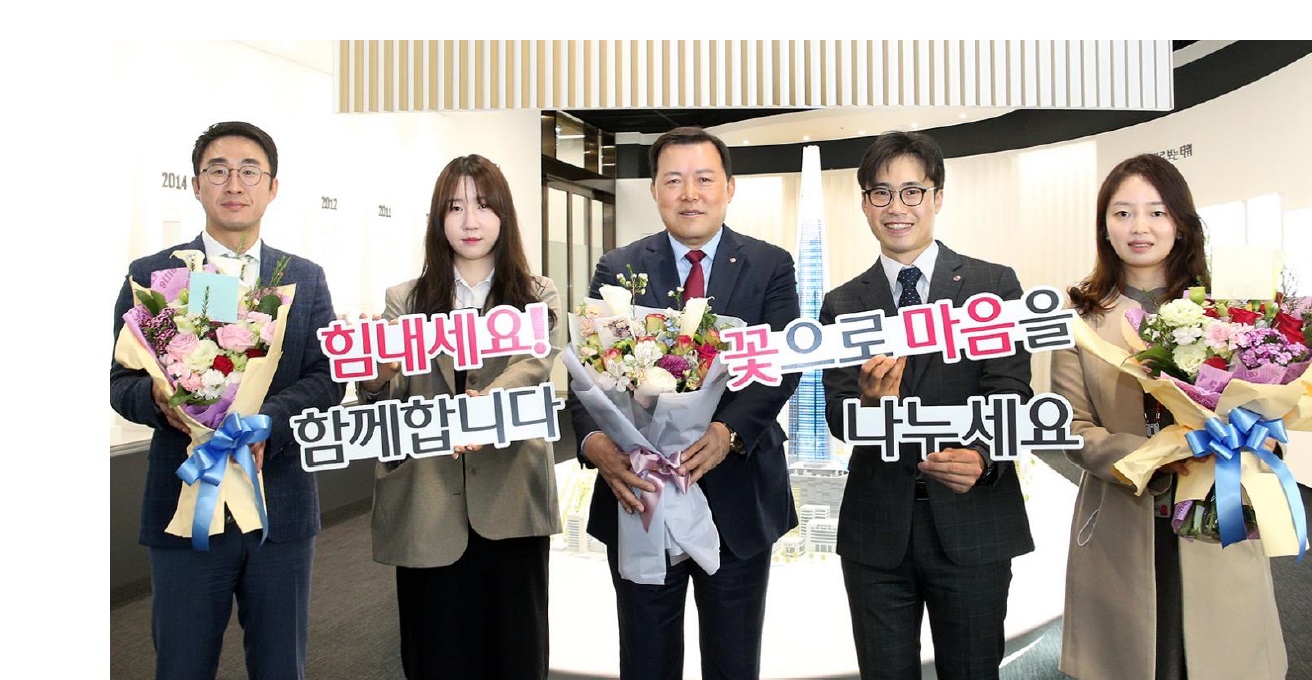 SEOUL, SOUTH KOREA: On 9 April, Kag-Gyu Hwang, CEO and Vice-Chairman of South Korea’s Lotte Group participated in the Flower Bucket Challenge. This campaign is in support of the nation’s floriculture industry during the coronavirus crisis. The initiative began because flower production companies and markets are suffering from a significant drop in sales due to the cancellations of commencement ceremonies since the COVID-19 outbreak.

The dare is reminiscent of the Ice Bucket Challenge, which went viral in 2014. However, in this version, participants don’t need to throw a bucket of ice over themselves; they encourage fellow business people to follow their example and buy flowers for employees.

The Lotte Group, for example, delivered a gift to employees of its partner companies in charge of sanitation and disinfection at Lotte World Tower in Jamsil, Seoul, along with a bouquet purchased at the local Namdaemun Flower Market.

He says, “It is a great honour to participate in this campaign considering the trying times for flower farmers. They are in trouble due to the cancellations of various events because of the health crisis. I am delighted to deliver flowers and gifts of gratitude to employees of our partner companies who are facing difficulties from the recent drastic strengthening of the hygiene and disinfection system.”

With these acts of kindness towards their employees and flower producers, the Lotte Group has been very committed to supporting and promoting goodwill.

The Lotte Group is South Korea’s fifth-largest business conglomerate and is involved in a variety of sectors, including hotels, chemicals, food and retail. As well as the ornamental horticultural industry, it is actively helping domestic farmers, who are suffering from a double whammy of plunging exports and slumping consumption amid the pandemic.

Lotte Mart (the hypermarket arm of the business) is cooperating in the short term, from now until June, with local governments and related organisations to help farmers working in Korea’s agricultural, fishery and livestock sectors. They anticipate this to reach a total of 1,500 tons and 7 billion Korean Won (KRW).

Earlier in March, this group held an event to promote the consumption of flatfish and abalone to help the fishery industry. Then, in April, Lotte purchased a total of 600 tons of goods from domestic farmers who are unable to ship and export fruits, vegetables and fisheries products, and is currently conducting a ‘Save our Farms’ event.

So far, the Lotte Mart has raised a 100 million KRW fund through a three-way collaboration with Chungju City and Chungbuk Horticultural Cooperative to purchase and sell about 300 tons of apples which were damaged during the typhoon season and therefore challenging to market.

Pictured is Vice-Chairman Kag-Gyu Hwang of Lotte (centre), who accepted the Flower Bucket Challenge through nomination from Dong-Jin Koh, CEO of Samsung Electronics.