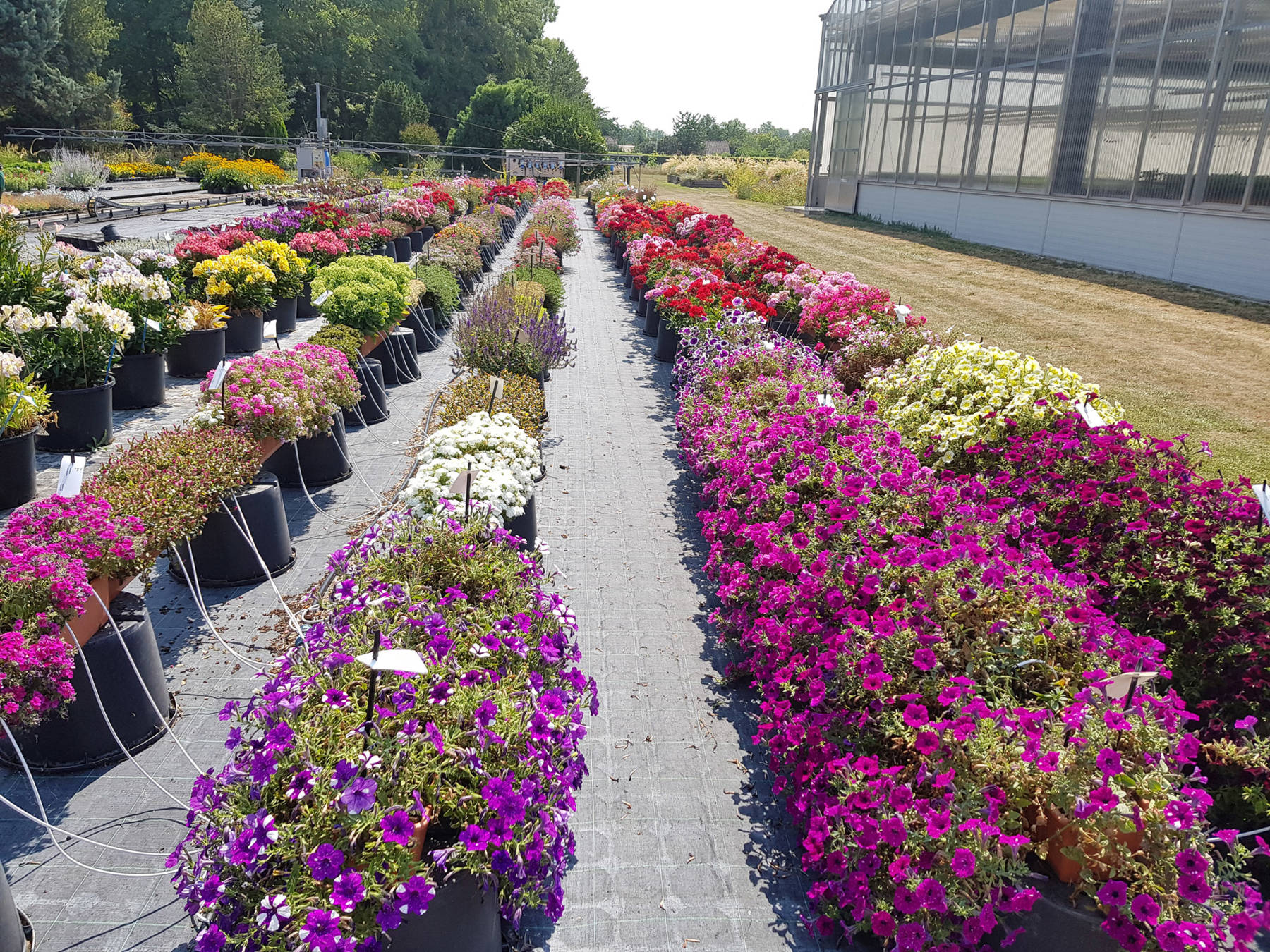 STUTTGART, Germany: German breeder and propagator Selecta One has teamed up with research institute LVG (Staatliche Lehr- und Versuchanstalt für Gartenbau) in Heidelberg to find out how drought-tolerant their bedding plant varieties are. Surprisingly, their popular lines in Calibrachoas and Petunias, species which are identified as water demanding, perform well with about 50 per cent of the water content required to maintain them in good condition. Calibrachoa ‘Rave Pink ’16 after several dry spells throughout the summer in week 36 (end of trial).

The summers are getting hotter and drier. This is having an increasing impact on the horticultural value chain. Stakeholders from within the amenity horticulture and landscaping sector, but also consumers will be increasingly preoccupied with questions such as What can I do to save water in a landscape or garden? Does a landscape requires re-planting with specific drough-resistant plants to save water and Which plants will suffer most if they are not irrigated every day in the summer? Choosing plants to suit our growing conditions is becoming increasingly paramount.

Sustainable and biodiverse landscapes and gardens

RHS research found that gardeners use about two-thirds of the domestic water supply during hot dry spells. This huge demand is hard to sustain in a drought so, not surprisingly, water companies encourage gardeners to do their bit to help reduce their usage. Selecting plants that not only are drought-tolerant (once established), but also are non-invasive, long-lived and disease and pest resistant, may contribute to develop more sustainable landscapes and gardens.

At the same time, there is a lot of interest in using plants to enhance biodiversity in landscapes and gardens. Plant breeding plays a vital role in creating a more sustainable and biodiverse horticulture, and is partially driven by changing consumer perceptions and behaviour. As such, it is important that sales outlets such as garden centres provide reliable information on sustainability and biodiversity matters in terms of the right point-of-sale material. In responding to these developments and trying to answer the drought-related questions, Selecta One, in cooperation with the research institute LVG in Heidelberg, screened part of its bedding and balcony range of drought tolerance. The primary goal of the trial was to understand the effect of drought on their growth, metabolism and development while identifying the genera and varieties that can be cultivated with 50 percent of the water content which supposedly is required to maintain them in good shape.

At the beginning of the trial last summer in week 18, researchers planted up 1 metre long window boxes using 83 varieties from 24 different genera. Table 1. The planters in the field contained  a peat/clay/wood fibre mixture.  Osmocote 8/9 M was added using a 3kg/m3 formula. Because of the use of slow release fertiliser, plant were re-fertilised with mineral liquid fertiliser in the last four weeks of the trial.

‘Stressed plants’ received and low water treatment and grew on until the end of the trail in week 37. In terms of average outside temperatures and precipitation levels in July and August 2020, consult  graph 1 and 2, respectively.

The trial used a comparison group including the same genera and varieties. The control plants received daily a high water treatment. For example, genera such as Delosperma and Sedum were irrigated with a dripper flow rate of 2 l/h, Pelargonium and Phlox with 4 l/h, Calibrachoa, Osteospermum with 8 l/h, and Bidens and Petunia with 12 l/h. Both variants were regulated by a timed irrigation of 24 minutes for the control plants and 12 minutes for the stressed plants.

Researchers defined the amount of water content basing themselves on plant characteristics,  and used a drip system which allowed for precisely controlled water treatments within the same field. Table 2.

Week 33 marked the end of long hot and dry spell. Many of the tested varieties suffered from heat stress and stopped blooming. At this point, consumers may have been tempted to empty their window boxes.

Therefore, the final judgements in week 37 should be seen from two different angles. First, researchers distinguish the well- performing varieties which withstood  the extreme heat in week in week 33. These include heat and drought-tolerant species such as Delosperma, Lantana, Pelargonium, Portulaca and Sedum. Surprisingly species known for being water demanding such as Calibrachoa and Euphorbia hypericifolia also performed well.

If consumers are willing to accept poorly looking plants in their window boxes due to low watering during a heat spell, Convolvulus, Dianthus, Gaura, Petunia, Osteospermum, Sutera and Verbena varieties too may join the list.

The plant scientists from Heidelberg evaluated the trial on criteria such as “overall impression” and “irreversible plant damage”. Table 3. The evaluation table published by Selecta One and LVG Heidelberg highlights the varieties that were rated good to very good between week 24 and week 37.

Sebastian Mainz (senior trade marketing manager at Selecta One says, “Astonishingly we found that next to the well-known drough tolerant Sedum and Delosperma, even varieties within our range of calibrachoas, for example MiniFamous® Uno Double ‘LavTastic’, ‘Rave® Pink ’16’ and PinkTastic®’ and Petunia such as ‘NightSky®’, ‘Famous Laser Pink’ and ‘Royal Sky’ defied the drought and were rated good to very good grown on with only 50 per cent of the optimum water content. The test results will serve to bring our drought-tolerant varieties under the attention of growers and end- consumers who are specifically asking for them.”