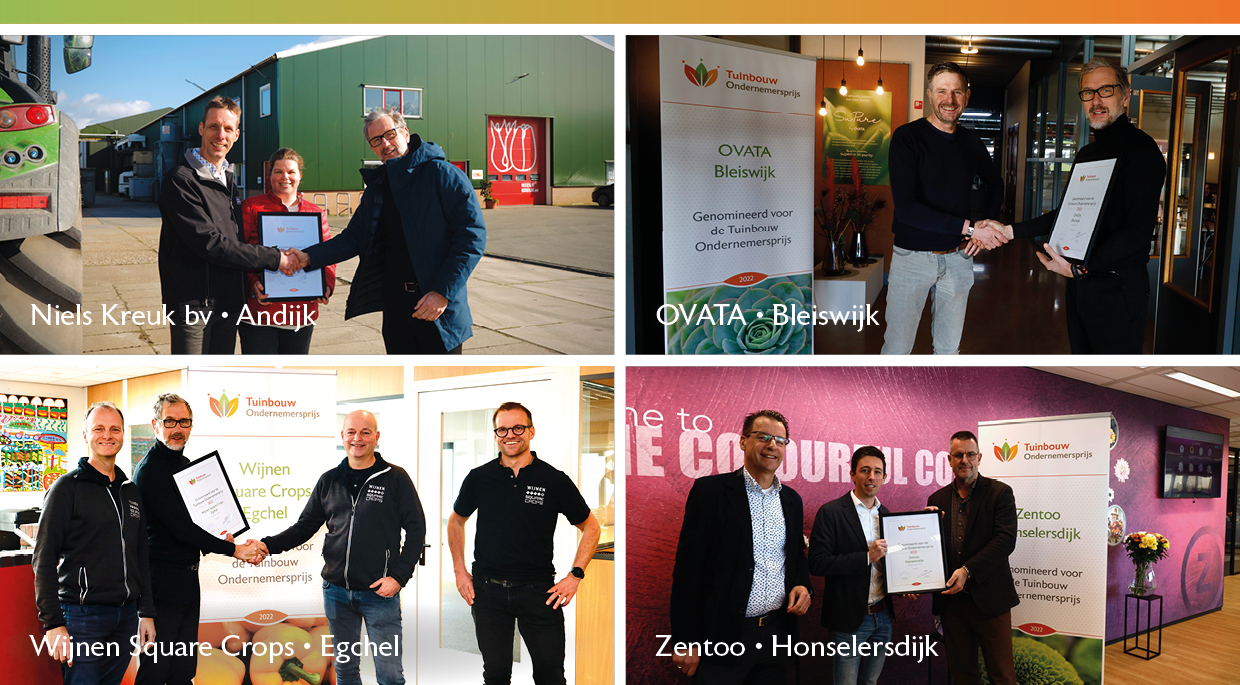 Four finalists have been announced as possible winners of this prestigious award. Chrysanthemum grower Zentoo from Honselersdijk, succulent plant nursery Ovata from Bleiswijk, cut tulip grower Niels Kreuk from Andijk, and bell pepper and cucumber grower Wijnen Crops from Egchel will be vying for what is called the Dutch Oscars of the horticultural industry. All four finalists stand out for their passion, vision, drive and excellent entrepreneurship.

This year, the event organisers are also launching a new award: the Robotics and Automation Award to highlight and honour companies that have done particularly well in terms of their technical innovations and their success in the horticultural industry.

Nominees for this inaugural award include Blue Radix from  Rotterdam, a company specialised in AI for the greenhouse industry, horticultural supplier Royal Brinkman from ’s-Gravenzande, Gearbox from Maasdijk and PATS from Delft, a reputable supplier of agricultural drones.

The horticulture sector faces significant challenges in 2022. Energy prices are skyrocketing and labour shortages are an ongoing issue. Fortunately, demand for horticultural products continues to be buoyant.

Dutch cooperative Prominent, specialised in the production and marketing of tomatoes won the trophy in 2020. The latest winner from within the ornamental horticulture industry was Phalaenopsis and Anthurium breeder and propagator Anthura, which won the accolade on 9 January 2019. This achievement automatically qualified the company for the 2020 AIPH International Growers of the Year Awards at IPM Essen where it was crowned the overall winner of the Gold Rose Award.

The awards ceremony is now back after a one year break due to Covid-19. In this context, the event’s spokeswoman, Diana Duijvesteijn told FCI that the 2022 awards are also a celebration of perseverance, resilience and risk management in Dutch horticulture.