Home > BelgiumProduction > Be Mum Be More

Be Mum Be More 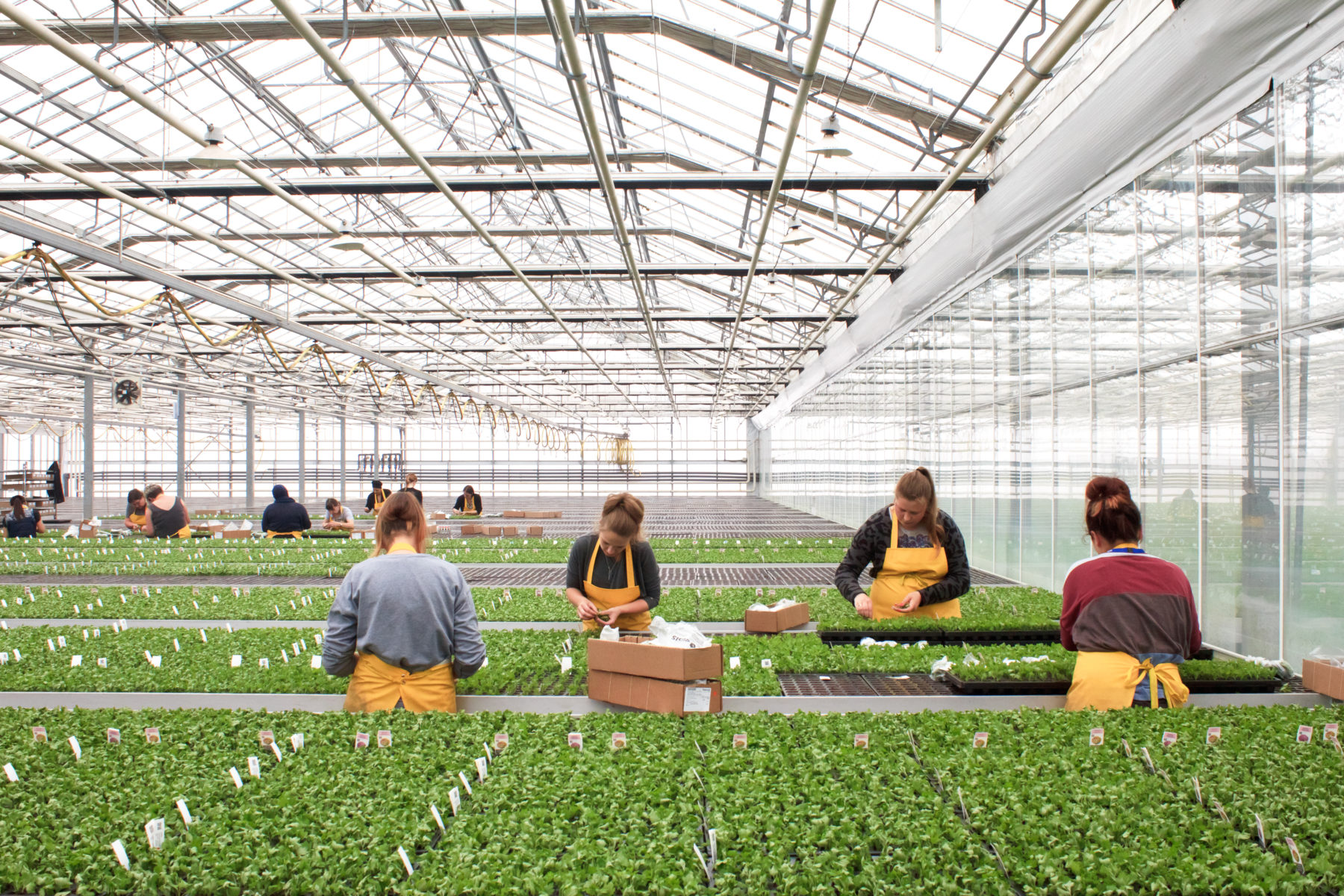 Gediflora is the world’s largest breeder and propagator of Belgian pot mums. According to industry insiders, the Belgium Mum is the finest ‘garden’ type mum on the market today. FloraCulture International sat down with company owner Elien Pieters to get the full story.

It all began in 1952 when Elien’s grandfather Georges swapped growing butterhead lettuce and tomatoes for pot chrysanthemums. From these humble beginnings Gediflora has grown into a global player in the world of ball-shaped mums with annual revenues of €10 million and 80 million cuttings sold/year. In late summer and autumn on their 14 ha trial and production fields there are pot mums as far as the eye can see from golden yellow to vibrant reds and everything in between.

Rooted cuttings in glue plugs with a 2 to 3 week finishing time are big (European) business for Gediflora,  accounting for 70% of their production. The remaining 30% of the unrooted stock is resold as quickly as possible to growers as one should store mum cuttings in a cooler no longer for more than a week (some varieties can be stored for two to three weeks but these are the famous exception to the rule).

Almost all of the starting material is destined for  export sales to Europe (44%) with the Netherlands (27.8%), Belgium (18.2%), Germany (16.2%) and France (11.5%) accounting for sizeable market share. Around 38% of the cuttings are produced for the US and Canadian market. For that purpose, Gediflora runs its own proprietary distribution hub (unrooted cuttings only!) in Florida from which it works with state-of-the-art rooting stations such as Grolink and Knox.

“The domestic market,” she added, “continues to be in the doldrums.” In 2015, Belgian field production of pot mums occupied around 250ha of land, while 20 ha of pot chrysanthemum were produced in greenhouses. Production dropped a dramatic 30% over the past three years. But even if Pieters raises concerns over how the next generation of family flower farms with ageing owners and no successor will be run, she always prefer to remain positive. She stresses that business consolidation in ornamental horticulture is almost inevitable and not something that stops at the Belgium border.

She points to their Dutch counterparts. Both breeding, propagating and production companies in Holland are undergoing consolidation which is reducing the number of companies but increasing size of those that remain. As growers consolidate, they generally increase their market share and gain economies of scale. It is known that currently ten growers represent 70% of the total Dutch market. “Our industry in Belgium started with hundreds of growers but as the companies grew, they consolidated with larger companies. Those who built the industry and survived are mostly experts who possess broad knowledge about the sector, the product and market demand.”

The Pieters have clearly opted for a product specialization strategy by placing emphasis on one single product. “We are specialists. This means that pot mum breeding and propagation are all that we do. We deliberately  never chose to diversify into cut chrysanthemums. It’s a completely different world and so many people out there are already good at it,” Elien said.

Breeding and propagating pot mums is where the focus lies as Gediflora remains committed to product quality, value and standard of service for every customer. “Plant loss at the customer’s level should be zero so we work exclusively with the most seasoned breeders. Improved genetics allow for improved crop results and wide diversity in flower colours, sizes and shapes. Ball-shaped, boldly coloured, profusely flowering, no pinching, easy shipping , easy handling, rust resistance and shelf life are just a few of the many features to double check when breeding Belgium Mums. Ultimately, the goal is to maximize consumer satisfaction.”

A mainly hexaploid flower, chrysanthemum is not an easy crop to breed with a loss or gain of several chromosomes and their genome is enormous. “Plans for the future include investments in revolutionary new genetic engineering technology such as CRISPR/CAS. Current breeding efforts are focused on creating ‘families’. A family should include at least four different colours so that each of its members can be treated more or less the same. This allows growers to produce high quality, hassle- free crops early-, mid- and late-season.”

Pieters is naturally spooked by anti-chrysanthemumism, taking it very seriously. “In predominantly Roman Catholic countries such as Italy, Spain, Poland and France, chrysanthemums are used almost exclusively for funerals or to decorate graves. As such, their image is far from positive. However, the tradition of All Saints’ and All Souls Day is slowly losing ground. Currently you can see potted chrysanthemums continue to be used to adorn burial spaces, albeit in smaller pot sizes. Another trend is that more people are choosing to be cremated rather than buried. I believe it’s the right moment to reshape the product’s image.”

Therefore, Gediflora joined forces with a local marketing firm. Together they launched the consumer brand Belgian Mums that comes with stylish POP materials and the ‘Be Mum Be More’ tagline. The campaign should drive consumer awareness of the versatility of Belgian Mums and remind consumers about the range of uses for pot mums as highlights for every living space, autumnal balcony or garden.

It’s a competitive and challenging market place where, with the assistance of the Plant Variety Rights Office, you have to constantly fight for your PBRs. But Pieters is quick to add that there is more bloom than doom. Take the United Kingdom, for example, where pot mums are not associated with death, where consumers regard the flowers as cheerful and positive. Pot mums are affectionately named ‘cushion chrysanthemums’ with floral domes providing weeks of pleasure when most other plants have finished flowering.

Along with the Brits come many Americans who have positive feelings of the pot mum using it as an attention grabber in an entryway or simply as a gift. Pieters also suggests that countries such as India, China and Korea could develop into significant export markets. “While these markets are still in their infancy, our sales team has already set up a series of trials at local partner companies. Tissue culture plants have been shipped to establish and maintain virus free stock. There’s no need to explain that mums are deeply rooted in Asian traditions. They all know the year-round cut chrysanthemum, they’ve seen potted chrysanthemum, but the Gediflora family of  huge ball-shaped Belgian Mums is really something new to them.”

According to growers across Europe, the company’s Jasoda family is without a doubt one of the most popular pot mums at the moment. “Easy to grow, each Jasoda member automatically branches so no pinching is needed. Outdoors they are extremely weather tolerant and in a protected environment they offer flexibility in programming.  Elien’s enthusiasm also points to the Arduros, which stand out for their intense colours and versatility in pot sizes varying from 9 to 23 cm. What’s more is that Arduros don’t need growth regulators.”

Becoming part of a Gediflora family can be a daunting process. “Every year we test around 30,000 seedlings. Following thorough selection only the best plants are kept. And only if the plant has withstood a number of yearly tests is it brought to market as a full-fledged production variety. It takes about seven years before a seedling becomes available as a commercial variety. Every year this yields five to ten new varieties. And to offer beautiful, uniform batches, we insist on stringent hygienic measures,” stressed Elien

Growers must be assured that only the best quality material is being used and that each cutting is produced to the highest standard. Until 1998 this was done in Gediflora’s own greenhouses in Oostnieuwkerke. But in 1998 the company moved cutting production overseas. Today millions and millions of unrooted starter plants arrive from Kenya and Brazil. Elien said the company benefits from Africa and South American imports. It’s no secret that Gediflora  could never produce the starter plants as cost-effectively in their own country. But it’s not all about the money. “Brazil and Kenya have year-round sunshine and the cuttings and the quality of the cuttings is extremely good,” Elien stated.

Gediflora’s biggest contribution to the Chrysanthemum industry is likely the creation of extremely well-branching species.

Previously, ball-shaped chrysanthemums were grown by sticking up to three cuttings into one pot and pinching twice. With Gediflora’s no-pinch varieties only one cutting per finished container is required. Pieters continued, “All Gediflora mums are self-pinching and should be treated as no-pinch varieties. There is no additional benefit in pinching our mums. It will only increase the production cost. Keep in mind that everyone pinches at a different height and machine trimming isn’t a viable option either as it causes extensive tissue damage.”

Proper planting techniques are vital. Thus, growers are advised to plant the cuttings (whether they are rooted or unrooted) very deep. The tip of the cutting should be positioned evenly with the rim of the pot after planting. Soon bottom shoots will emerge from the soil providing support for the entire plant. Moreover, it is important that crops are planted in the center of the pot.