Home > > Do empty aisles at Trade Fair reflect the calm before the coronavirus storm?

Do empty aisles at Trade Fair reflect the calm before the coronavirus storm? 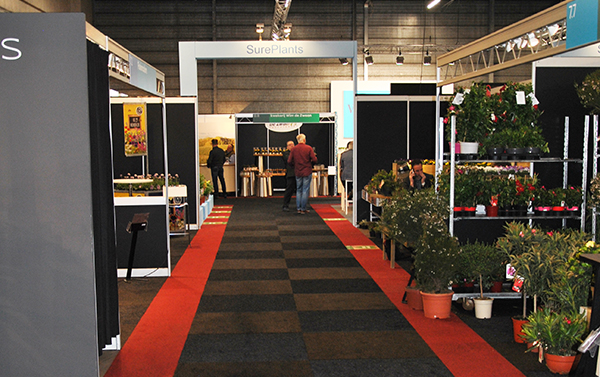 NAALDWIJK, the Netherlands: The coronavirus outbreak is dampening consumer demand and could not have come at a worse time of year for plant growers. Producers of early spring flowering plants in particular face losing part of their income, as many of them rely on selling their violas, pansies, primulas and bellis in March and April, two crucial months for bedding plant sales.

Meanwhile, the weather gods predict pleasant spring weather across Western Europe. Still, the two big questions at the Trade Fair Naaldwijk that remain unanswered are whether shoppers will continue to put plants in carts, or will they avoid crowded places such as garden centres and flower markets due to further lockdowns in Europe?

When they started preparations a few months ago, trade show organiser Royal FloraHolland must have thought we need a fun theme for this year’s Trade Fair Naaldwijk. But the trade show’s tagline ‘50 shades of green’ ultimately resulted in bleak results.

Results that everyone could have predicted on the opening morning when it turned out that leading growers such as Ter Laak Orchids and OK Plant at the eleventh hour had cancelled their participation. To make matters worse a sizeable number of wholesale companies including FleuraMetz, Lemkes, DFG, Profit Plant and Enigma Flower Trading kept their sales force far from the exhibition floor which usually welcomes a sizeable number of exporters and their international customers.

One cannot repeat it enough. There was absolutely nothing wrong with the plants showcased recently at the two-day event at RFH’s premises in Naaldwijk. Take F.N. Kempen’s stunning display of double Belarina primroses, one of David Kerley’s breeding breakthroughs in recent years and marketed through Kientzler. The plant is a firm favourite among consumers across Europe with wholesalers and their retail customers willing to pay a premium to the family-run plant nursery, operating from a10 ha production site in Mijdrecht. Not so this year as big-box stores abroad started to cancel orders amid growing coronavirus fears. 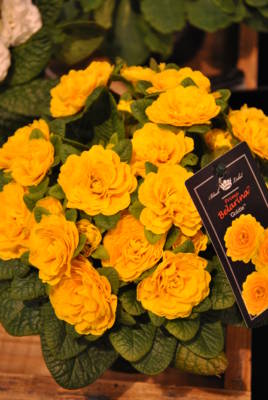 The Kempen story does not stand alone. It is a similar tale to that heard from other plant growers exhibiting at this year’s show from those selling to big-box stores and Italian wholesalers. Plant growers possibly have the risk of forced crop destruction already at the back of their minds.

On the opening day of the trade fair, the World Health Organisation declared the coronavirus outbreak a pandemic and no single business can really plan for such a situation, marked by an unprecedented wave of uncertainty and drop in economic activity. In terms of the ornamental plants business, the coronavirus has especially left the big box growers in the unfair position of taking the most significant risk, acting as the buffer from the retailer against all the economic uncertainties of producing plants.

It’s also a situation which painfully reveals the weaknesses of the horticultural supply chain. Just think of Italy, a country in a nationwide lockdown, and the Dutch grower who relies on a single company in Albenga for potted herbs, lavender or daisies.

Despite the obviousness seriousness of the situation, Wouters plant nursery believes it is essential to keep the threat in perspective and to remember that it is not all gloom and doom. The good news is that according to long-range forecasts, significant parts of Western Europe expect to have sunny days and warm temperatures soon.

The company’s stand is filled to the brim with bedding plants sold as no-frills and anonymous plants in bedding packs or pots or under own brand names such as Festival Colours (comprised of exciting colour mixes of violas and awesome combinations of bacopas, lobelias, verbenas and petunias) and Wouters&Wouters including speciality Petunias such as Amore, Nightsky, Stardust, Marvelous and Suzy Storm and interspecific Pelargoniums

Situated over three different sites in Ens and Ijsselmuiden, Wouters is one of Europe’s largest suppliers of bedding plants to retail customers. The family-owned business grows annually more than 20 million plants in bedding packs, pots, hanging baskets and planters.

Pieter Middelkoop is sales representative at Vireõ, with a production area of more than 30 ha in the Aalsmeer area and Luttelgeest also among the bigger plant nurseries in the Netherlands. Theirs is an extensive range of tropical houseplants such as Monstera, Ficus, Dieffenbachia, Hedera, Yucca and Dracaena. Three years ago, the conglomerate of nurseries –owned by the Hoogendoom family – joined forces with breeder Agriom commissioning their line of no-fuss potted roses. “The five different cultivars –producing medium-sized flowers – don’t bear fancy names with customers directly ordering them by colour. Another product which is going strong is Mandeville grown in the spring and summer season by Harold Heemskerk.

A relentless focus on customers, keep the Vireõ company innovating. The concept of tea at its freshest was launched at the 2015 Aalsmeer Trade Fair. Grown in D-Grade pots from Desch Plantpak, and according to the standards of the MPS Fruit & Vegetables label, the concept comprised a gift bag including two potted herbs: mint (Mentha) and lemon verbena (Lippia citriodora/syn.Aloysia citrodora). Now five years later, Middelkoop the concept turned out not to be their cup of tea as the floppy herbs proved to be challenging to tame into pots and featured disappointing shelf life. 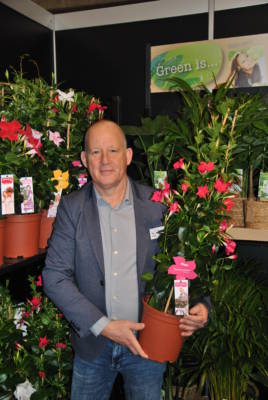 Innovations come and (mostly) go. Vying for the Greenovation Award at the 2019 Trade Fair Aalsmeer was Potburri, F.N. Kempen’s brand of biodegradable pots made of the shells of sunflower seeds. Pottburri pots cost the grower €0.28 while the price of a standard plastic pot is between €0.06 – 0.08. As such plants in Pottburris were more expensive than plants in conventional pots, and unfortunately, no segment of the market was willing to pay more for non-plastic pots.

Speaking of product innovation, Boers Wandhangers decided to differentiate itself in a very crowded market for bedding plants by specialising in flower pouches incorporating a smart watering pipe which makes watering easy. Viola pouches have eight-slits at intervals down its length for plug plants to be inserted. Planting is finished by adding a plant on the top of the flower bag. Five-slit pouches provide space to larger bedding plants such as petunias and begonia. The company operates from a 1ha site in ‘s-Gravenzande which has been purpose- fitted with vertical growing racks. 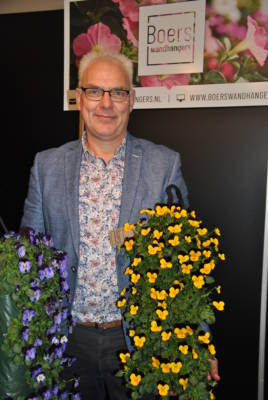 Another prime example of product innovation is VDE Plant/Intenz Home, a company and product that is backed by active social media strategies. Driving forces behind the company are third-generation Karin van der Eijk and her brother Edwin who together with business partner and co-owner Hein Visser run a 9ha tropical plant nursery.

Intenz Home is the brand name of a range of miniature water gardens featuring 30 different genera of tropical houseplants which grow in water alone. The Intenz product portfolio comprises of Clusia rosea Princess, monstera, calathea, strelitzia and clivia, contained in a test tube, fishbowl or cylinder vases with an optional LED light base or LED top lighting.

The company’s product developer, Krista van der Eijk, says Intenz Home makes the perfect low maintenance houseplant. All that consumers must do is to refresh the water after a couple of weeks while paying attention not to submerge the plant itself and leave the upper part of the roots above water so that they can breathe.

Presenting his full note order booklet, Edwin van der Eijk says that demand is healthy. He adds that Intenz Home has received much acclaim from the trade both at home and abroad, earning them Royal FloraHolland’s Glass Tulip Award in January.

Sales of Intenz Home plants are less weather-sensitive than, for example, bedding plants. What’s more, amid rising coronavirus concerns, it is safe to say that consumers will be using their homes as a base of comfort, safety and heightened enjoyment. That was at least one Intenz light in an increasingly darker tunnel as just before closing the Trade Fair Naaldwijk the Dutch government announced that the country’s coronavirus cases now have surpassed 600 and banned indoor gatherings of more than 100 people. That has undoubtingly given the more than 200 exhibitors and a handful of visitors an uneasy feeling about the auction’s decision not to cancel the event. Coronavirus sceptic or not. 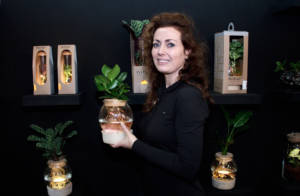