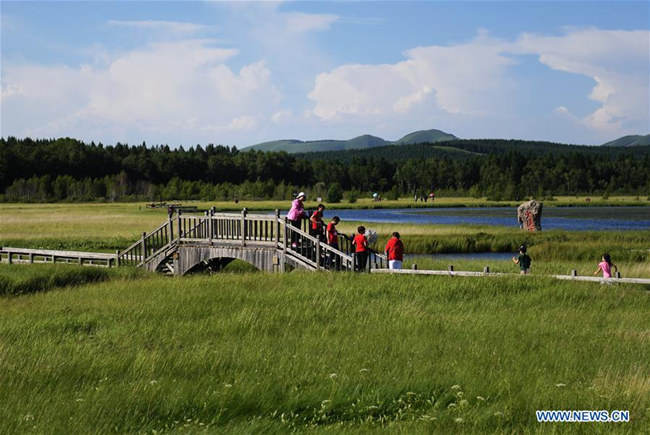 In order to offset desertification, China is working hard to make afforestation a reality.

This photo taken on July 11, 2017 shows tourists visiting the Qixing Lake Scenic Area of the Saihanba State Forest Park in Chengde City, in China’s northern Hebei Province. Saihanba is a vast forest covering nearly 75,000 hectares. It was a piece of barren land 55 years ago, but years of afforestation effort haves turned it into an important ecological shield for Beijing and Tianjin.

China has seen reduced desertification and increased forest coverage since 1978, thanks to the Three-North Afforestation Program (TNAP), said a report released on Dec. 24, 2018. Implemented in the northeast, north and northwest China, TNAP is a national programme fighting against soil erosion and wind-sand damage by planting sand-fixing forests. The area of sand-fixing forests has increased by 154 percent in the past 40 years, contributing to the reduction of desertification by around 15 percent, according to a report jointly released by the National Forestry and Grassland Administration (NFGA) and the Chinese Academy of Sciences.

Over the past 40 years, TNAP increased the forest area by 30.14 million hectares and raised the forest coverage rate from 5.05 percent to 13.57 percent in the regions it covers, said Liu Dongsheng, deputy head of the NFGA. (Xinhua/Wang Xiao)