Are Western sanctions causing a fall in Russia’s flower imports? 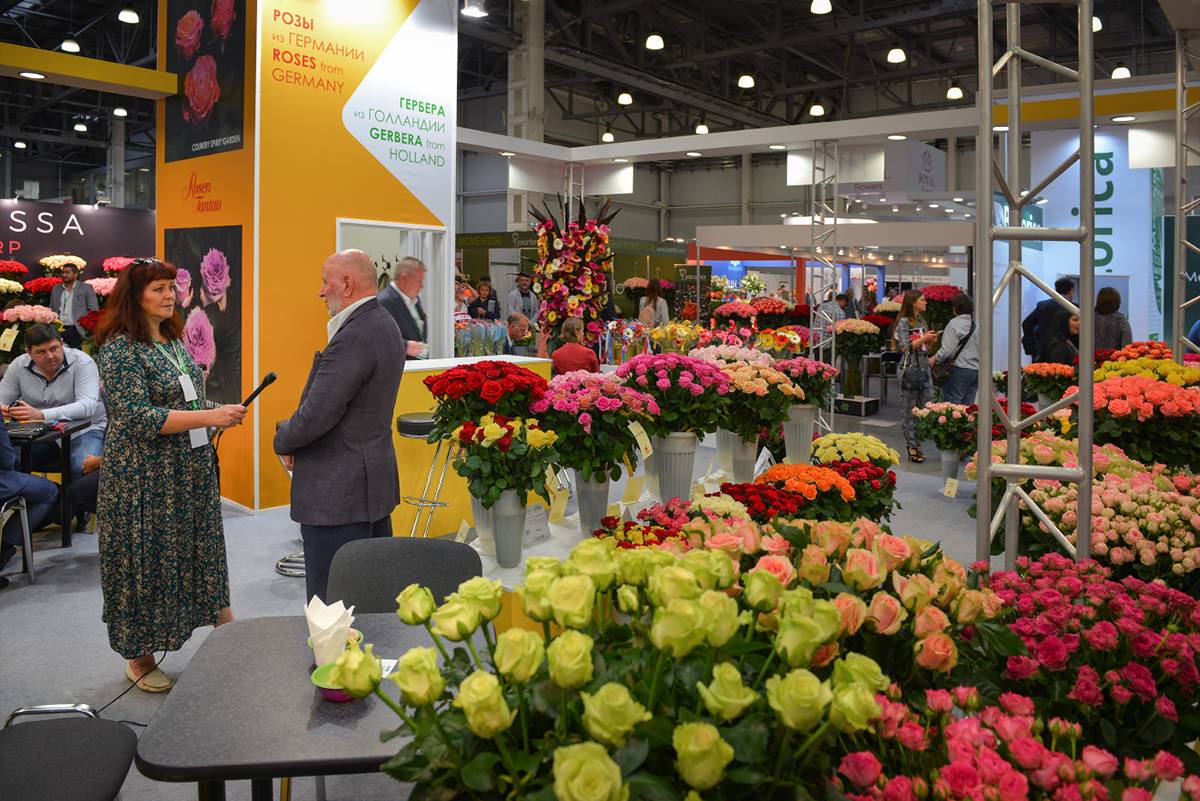 Currency control by the Russian government and Western sanctions have caused a significant fall in Russia’s flower imports.

From the onset of what in Russia is called a ‘special military operation’, flower imports to Russia plummeted significantly. The Central Bank of the Russian Federation forbids Russians from moving foreign currency abroad and enforces a strict limit on the amount of foreign currency they can withdraw. Russian companies that earn revenue in foreign currency must exchange 80 per cent of that foreign currency with the central bank for rubles. These currency controls aim to stabilise the ruble’s value, but they also prevent flower importers from paying their foreign suppliers.

In April, many leading Russian flower importers, including Nikita Lapenko, managing director of Moscow’s Flower Trade Company, incurred severe delays in flower shipments. He wondered how those who bought flowers on credit would pay their suppliers. Lapenko reminded us that importers bear all costs in foreign currency: they buy flowers in euros at Dutch auctions, paying in US dollars for their delivery to Russia.

He summarises wholesalers and importers agree they are “in a stupor”, as 90 per cent of business is import-dependent – including seeds, equipment and spare parts.

A similar situation is occurring for all traders in imported goods, and the political will to resolve this is unclear.

Further complicating the current business environment are international banks suspending payments from Russian companies to foreign counterparties, even if these Russian companies and banks through which operations are conducted are not under sanctions.

According to Timofeev, international financial organisations have taken a ‘wait-and-see attitude or enforced limiting regulations, which impact transaction payments which can be delayed for several weeks, in extreme cases, for more than a month.

An unidentified number of Russian floral wholesalers have suspended trading abroad, saying they do not have plans for any new deliveries from Europe and far abroad any time soon.

This decision creates a risk of product shortage because only Moscow, St. Petersburg and Western Russia have sufficient flowers in stock.

According to the Russian Greenhouses Association, about 10 per cent of orders for imported flowers are not fulfilled.

The association’s board member Alexander Litvinenko told FCI that the industry’s prospects are unclear. He says, “There’s ongoing disruption of economic ties. Floral shipments from abroad are under extra scrutiny. There’s much re-arranging and optimising of ordered flowers. More time is needed to determine the correct logistic routes, and thirdly, to ensure payment for the goods in an environment where some banks are limited in international transactions. Therefore, supplies of imported flowers continue under much more complicated and time-consuming circumstances.”

Litvinenko says that the ruble’s volatility against the euro and dollar makes importing flowers more expensive for the Russian end consumers. “In April, the demand was lower than usual. However, it is difficult to say how much this is related to the situation in Ukraine, as the market always slightly drops post-International Women’s Day and pre-Easter. “Still, such a situation may be favourable for Russian flower growers, as some wholesale companies are planning to switch to domestically grown flowers. But the truth is that Russian flower farms’ output is insufficient to fill the lack of imported flowers in the short run.
“It is difficult for me to say how the situation on the flower market will develop further since it depends, in many respects, on political stabilisation.”

According to the Russian Vedomosti business paper, Russian wholesalers source a significant portion of flowers from South America, with Colombian and Ecuadorian grown flowers transiting via Amsterdam and Liège Bierset to be subsequently trucked to Russia.

It is estimated that Russia grows around 400 million flower stems annually, with domestically produced flowers having an 18 per cent market share, says Litvinenko. He comments on the current state of the cut flower trade: “Decreased activity in the market in the first half of 2022 was superimposed by the annual seasonal decline in sales from late June to early August. By September 1, the number of orders is increasing, but due to the general economic situation, there will be no return to last year’s level.”

He continues, “Russia imports flowers predominantly from Ecuador, Colombia, the Netherlands, Kenya, and Ethiopia. According to the 2021 figures of Russia’s Federal Customs Service, Russia imported 81,400 tons of cut flowers, more than at the beginning of the pandemic a year earlier (78,500 tons) but less than in the pre-pandemic year 2019 (86,600 tons). At the same time, value imports grew by 57 per cent from $313.3 million to $492.1 million.

“Over the past two years, prices for imported flowers in Russia have increased by 30-40 per cent, while domestic flowers have risen by 14 per cent.”

Experts say that Russian and Armenian producers will increase capacity and their offers given the current political situation. Cash crops in Russian greenhouses include Chrysanthemums, roses, and tulips. However, Alstroemeria, Lisianthus, and Gerbera are partially catching up to substitute imported flowers.

On 8 April 2022, the European Union published its ‘Restrictive measures given Russia’s actions destabilising the situation in Ukraine’, prohibiting EU member states from exporting flower bulbs and nursery stock products to Russia. This export ban does not include fresh-cut flowers and potted plants.

While several Dutch floral wholesalers have temporarily halted sales to Russia, the flower trade between the Netherlands and Russia has not reached a complete standstill. Yet, recent figures released by the Dutch Association of Wholesalers in Floricultural Products (VGB) and market analyst Floridata indicate that Russia has disappeared from the top ten export destinations.

FlowersExpo 2022 is around the corner

Russia’s annual horticultural trade show FlowersExpo is arguably one of the best opportunities to gauge the state of the Russian flower market. This year, the event is set to take place at the Crocus Expo convention centre between 13-15 September 2022.

Commenting on the industry’s current state, show organiser Nadezhda Grigorieva says that FlowersExpo 2022 floorspace will span 10,800m², approximately the same size as in 2021. (In the pre-corona year 2019, the exhibition area was 16,700m²).

The number of exhibitors will be 235, a 10 per cent increase compared to 2021. Pre-Covid-19, FlowersExpo attracted around 456 companies, 220 domestic and 236 international exhibitors from 32 countries.

In 2020, the decrease in exhibitors was about half that amount due to foreign participants who could not travel due to Covid-19 restrictions. This year, Grigorieva says, “international participation is limited due to the political situation, and the threat of a resurgence of the Covid-19 virus.”

She says that 2020 was the most challenging year for FlowersExpo when the pandemic took the world by surprise. She says, “In that same year, the FlowersExpo show floor measured 6,000m² with 127 participating companies. In 2020, FlowersExpo was the only in-person flower trade exhibition that took place in Russia and Europe. It also marked the debut of FlowersExpo.Online.”

FlowersExpo 2022’s educational programme has expanded significantly, with 40 side events planned for this year’s event. These include the Russian championship in floristry – Russian Florist CUP 2022 – where nine of the country’s top florists battle it out for the coveted title.

Moreover, the exhibition will host three conferences: The Future of Russian Flower Farming, Garden Retail: Garden Centre-2022, and FlowersCONF, focusing on the digitalisation of flower retail.

True to tradition, the show’s Novelty Showcase will be the beating heart of FlowersExpo, recognising Best in Show in two categories: product quality and novelties.

In 2022, there will be no country pavilions. Grigorieva explains: “The number of foreign participation has dropped dramatically, first due to Covid-19 and now due to the political situation.”

However, this year does have stands featuring individual companies from nine countries. Grigorieva mentions the Netherlands, Serbia, Kenya, Colombia, Ecuador, Belarus, and Kazakhstan.

According to Grigorieva, cut flower shipments to Russia continue from the main exporting countries: Ecuador, Kenya, Colombia, and the Netherlands in the required volumes.

She says, “Exporters continue to work with their buyers. There are difficulties in the logistics of flowers. The period of delivery of products has lengthened, and the cost of logistics services has increased. There are difficulties in making payments. As a result, flower prices have risen. The consumption of flowers decreased in 2020 and remained at this level. European sanctions were imposed on importing flower bulbs, planting stock, and greenery into Russia. As for the Dutch presence at this year’s event, there is only one exhibitor.”

The exhibition will be held in a dual format: in-person and online. FlowersExpo.TV will be broadcast online with reports and interviews from the exhibition.

It is unclear who will be at the show’s opening. Still, Grigorieva expects representatives of the Ministry of Agriculture, the Chamber of Commerce and Industry, and partner associations of the exhibition: Greenhouses of Russia, the Association of Producers of Planting Material, and Russia’s National Guild of Florists.

Grigorieva concludes by saying that Russia’s leading cut flower producers are bolstering their market presence. “Last year, many of them expanded their business growing more flowers. Moreover, the production at small-scaled farms is actively developing.”