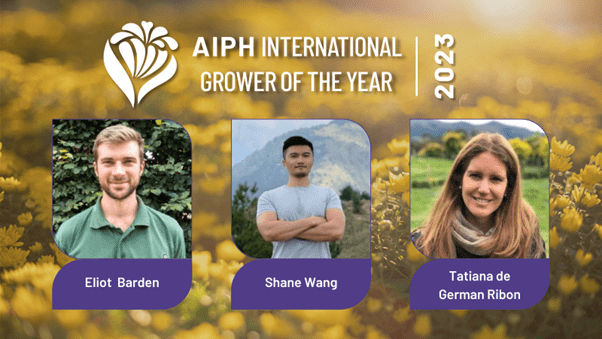 The International Association of Horticultural Producers (AIPH) announces the three young horticultural professionals who have been selected as finalists for the second Young International Grower of the Year Award.

Last year, AIPH collaborated with Jungle Talks to introduce the Young International Grower of the Year category to the established International Grower of the Year (IGOTY) Awards. This category celebrates vibrant individuals, aged 25-40, who will lead the industry into the future. Once again, participants of Jungle Talks’ Pro Manager Mastercourse who submitted an entry for the award have been assessed and three young professionals have reached the final.

Eliot Barden, UK, is the Production and Education Manager for Majestic Trees. Eliot had an interest in horticulture from an early age and began his education in the subject via a Royal Horticultural Society evening class at the age of 15. He subsequently studied at the Kew Royal Botanic Gardens before joining Majestic Trees in 2018.

Shane Wang, Chinese Taipei, is an R&D Manager for Royal Base. He also acts as Chairperson of the Taskforce of Automation. One of his goals is to pioneer AI and automation within the industry in Asia. He has already been successful in combating bacterial diseases in Royal Base’s Phalaenopsis, greatly reducing the percentage of loss in the last five years.

Tatiana de German Ribon, Colombia, is the General Manager for Flores La Conchita. With an MBA from Wharton, USA, she is an aspiring business professional who seeks to effectively adapt to the rapidly changing industry. Prior to joining Flores La Conchita, Tatiana was responsible for Cultural Affairs for the Colombian Embassy in Washington D.C.

The winner will be announced at the AIPH International Grower of the Year Awards Ceremony on 24th January 2023 at the Atlantic Hotel in Essen, Germany. The evening event includes a drinks reception with a range of food to fill stomachs as guests network with others in the industry.

Tickets for the evening reception and awards ceremony cost only €50 (incl. VAT) per person. Groups of five tickets are available for the discounted price of €200 and groups of ten for €350. To secure your place, visit the AIPH Website. Tickets can be cancelled and refunded (minus a €10 admin fee) until 13th January 2023. Visit www.aiph.org/events/igoty-2023/