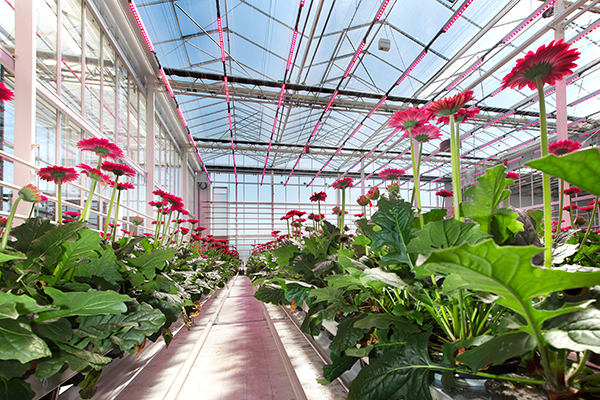 With the Dutch horticulture industry working towards ‘climate neutral’ greenhouse crop production by 2040 at a session of GreenTech’s online conference in October 2020, the audience heard about the techniques and technology growers may adopt to meet their commitments to reducing greenhouse gas emissions, writes Claire Shaddick.

The halfway target is to use 50 per cent less gas [compared to 1990] while emitting 50 per cent less CO2 by 2030. “These are quite some challenges and call for an energy transition, from fossil fuel towards other, more sustainable sources,” said Stijn Jochems, a researcher at the Delphy Improvement Centre. “And we need to use that energy more efficiently.”

The first step is to cut back on the energy growers need to use, and to prevent losses where possible. “Save energy by using less energy-demanding systems such as LEDs, which are more energy efficient than HPS [lighting],” Jochems said. “Use climate screens to keep the heat inside your glasshouse and activate your crop by using vertical fans instead of minimum pipe temperature.”

He added: “Keep your greenhouse and crop in balance. Make sure the energy you put in is used efficiently. If not, it’s also a loss.”

Managing humidity by opening the vents leads to significant energy losses. One solution is ‘active dehumidification’ where water in the warm, humid air condenses on a cold surface. It not only controls humidity but allows latent heat to be reclaimed and works best in crops grown at high air temperatures. “We tried using active dehumidification in a tomato trial at Delphy Improvement Centre in 2019-2020,” said Jochems. “In total, about 75 per cent of the energy [used by the crop] was harvested from the greenhouse climate.”

The Greenhouse 2030 Project at WUR

Some of these ideas are demonstrated in the Greenhouse 2030 project at Wageningen University & Research (WUR), exploring how crops can be grown in a greenhouse without recourse to fossil fuel, without discharging any wastewater and without the use of pesticides.

The project uses a standard greenhouse clad in a diffuse single glass and insulated by three climate screens which are “intensively used,” said researcher Frank Kempkes. Crops are lit by LEDs which emit 85 per cent red, 5 per cent blue and 10 per cent white light. Humidity is controlled by active dehumidification, where the condensate is reused for irrigation and the latent heat is collected by a heat pump. Electricity to power the heat pump and lighting is bought in from a renewable source, and a boiler burning biogas or biomass meets peaks in demand.

Four crops with a lower heat demand are trialling in this facility: eight varieties of freesia, two varieties of gerbera, pot anthurium, and strawberries grown on a movable gutter system to increase plant density.

Results so far suggest freesia and anthuriums can be grown faster while production and quality of gerbera are ahead of crops grown conventionally, said Kempkes. “It’s not emission free, but there are improvements to be made,” he said.

In practice, such an approach will depend on the availability and reliability of renewable heat sources. “In the Netherlands, for instance, geothermal heat and long-term heat storage are available at many sites,” he said.

Edward Verbakel, group managing director at VB, which connects greenhouse areas to geothermal wells, said geothermal energy now accounts for about 12 per cent of Dutch horticulture’s total annual heat requirement. “In the long term it will definitely be possible to increase that; I doubt that it will be 100 per cent,” he said. “Technically and logistically you can’t reach every greenhouse, only where they are clustered.”

Some countries offer funding to encourage investment in geothermal, where the geology is suitable, but Verbakel says growers will, in the longer term, be disadvantaged if they don’t take steps to improve their sustainability.

Some greenhouses in the UK have benefited from a government scheme, the renewable heat incentive, to support investment in renewable heat technology.
Martin van Zeijl, senior sales manager at greenhouse builders BOM Group, said it was key to the economics of two new nurseries the company has constructed in the east of England. They will recover heat from water discharged from neighbouring water treatment plants, which currently goes to waste.

The nurseries, completed at the end of 2020, total 29ha, which is large-scale for the UK; one will produce tomatoes, the other sweet peppers. However, the government subsidy has been relatively short-lived and will close its doors to new applicants at the end of March 2022.