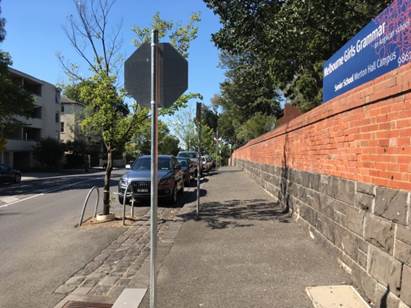 As part of the development of the strategy, the City of Melbourne’s 70,000 street trees were surveyed and mapped. The survey looked at species, size and condition to assess the useful life expectancy of each tree. All findings from this work were made available in an online map called the Urban Forest Visual, and each tree assigned an identification number and email address to facilitate tracking and reporting, an initiative that attracted unexpected worldwide interest. The associated database was also used to model how the canopy would evolve under different circumstances, including a “do nothing” scenario. The modelling showed that reaching the 40% canopy cover target would require planting at least 3,000 trees a year until 2040. The modelling did not focus exclusively on tree numbers but also considered how tree planting conditions would affect canopy size. Such analysis showed that achieving targeted increase in canopy cover would require footpath extensions, drainage reconfigurations and/or planting trees into carriageways beyond existing kerb lines, where there is adequate below and above space to accommodate root and crown development, and where it is much easier to give trees access to moisture.

Also supporting the strategy is a series of ten Urban Forest Precinct Plans that guide implementation in local neighbourhoods until 2022 (ie over the first 10 years of the strategy’s anticipated lifespan). These plans were subject to the same official adoption process as the main Urban Forest Strategy. Each of them shows on a street by street level the current state of the local urban forest and the changes that will take place – whether replacement or new plantings. It also defines tree species choices, as well as possible opportunities for wider street redesign work. The works identified are prioritised, with projects being allocated a timeframe for delivery either in year one to four, five to seven or eight to ten. This prioritisation was based on data collected on thermal hotspots, low canopy cover levels, concentrations of vulnerable residents, tree health and scale of opportunity. The Urban Forest Visual is updated on a live basis to reflect where projects identified in the precinct plans have been completed. As of July 2020, a vast majority of the projects identified have reached such completion stage.