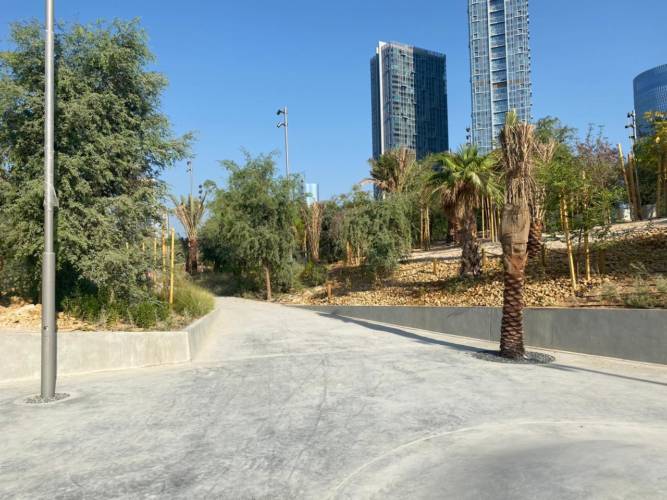 On Reem Island, Abu Dhabi seeks enhanced quality of life with a new take on open space and landscape provisions.

Quality of life has become a central agenda item in the United Arab Emirates (UAE). The approach taken to manage new developments and public infrastructure programmes both reflect this shift which leads to renewed interest in and integration of natural systems close to where people live and work. The Reem Downtown masterplan and Al Fay Park provide striking illustrations of these new principles at different scales and stage of realisation.

Established in 1971, the UAE is located in the Arabian Gulf and bordered by Saudi Arabia and Oman. The UAE has urbanized rapidly over a comparatively brief time frame, propelled by an oil-based economy. Abu Dhabi represents the UAE’s largest emirate. The city of Abu Dhabi, the UAE’s capital, spreads along an archipelago found along the coast that is home to wildlife-rich mangrove and sea grass habitats.

After a phase of carefully planned expansions, Abu Dhabi’s growth from the mid-1970s was liberally managed in an effort to meet soaring housing needs. The city was home to less than 10,000 residents in the early 1960s, reached over 127,000 residents by 1975 and counted an estimated 1.48 million residents as of mid-2020. Such growth was coupled with a pronounced lack of environmental stewardship, dominance of car-centric development and strong spatial fragmentation.

The creation of the Abu Dhabi Urban Planning Council (UPC) and the launch in 2007 of the Abu Dhabi 2030 Urban Structure Framework Plan were designed to restore a more cohesive and sustainable approach to managing development. Later updates of the plan and ensuing policy and design documents place even more emphasis on this objective, with quality of life being made a central and overarching goal for managing future expansions.

The Reem Downtown masterplan and The Fay project provide two striking examples of this shift. Both illustrates the way in which the pursuit of enhanced liveability is leading to a departure from the “Las Vegas-style” landscaping that makes up most of Abu Dhabi’s green spaces, with water-hungry manicured lawns and lines of palm trees.

Both projects are located on Al Reem, one of the islands that are closest to the city of Abu Dhabi’s downtown area. While parts of Al Reem are already developed, large extents of land are still open, including a 105-hectare peninsula known as Reem Downtown. In 2015, Tamouh, the owner and developer of Reem Downtown, appointed Arup to develop a revised detailed masterplan for the site. The appointment was in light of the emerging policy change, and the need to adjust previous plans accordingly.

One of the significant changes that were made to the masterplan was related to public realm provisions and the integration of natural systems as a means to achieve enhanced liveability.

“I always work at debunking this notion that landscape and public realm isn’t walkable because of the heat. It is not true, for eight months of the year, it is comfortable to walk. You simply need to work harder at making the area walkable for the warmest period of the year through the use of trees, shade structures, building and landscape integration and exploiting the microclimate ” explains Simon Green, Landscape Director at Arup.

To enhance microclimate, plots and building orientations were adjusted to facilitate the flow of cooling north-westerly winds and easterly evening breezes through the public realm. Proposed building massing was adjusted to maximise shade, while also enabling a much wider proportion of future residents to enjoy sea views – a move that also enhanced the selling prospects of a much wider range of plots. The shading strategy further relies on the widespread inclusion of irrigation-dependant tree planting in public realm areas intended for pedestrian (rather than car) use. In the densest part of the development, which is also the least exposed to the cooling north-westerly winds, a greater reliance on arcades was proposed.

The distribution and design principles of parks and other public landscapes were also strongly modified. Previous iterations of the masterplan concentrated most open space provision in one main 10 plus-hectare park with large areas of grass that relied on extensive irrigation. As Hrvoje Cindric, Arup’s Middle East Urbanism leader, who worked closely on the project explains, the revised plan proposed instead to “redistribute the space to give it a bigger reach within the community, with larger civic spaces including trees, colonnade and xeriscapes close to key community facilities such as the mosque, intimate smaller spaces close to where people live and a set of destination open spaces to address the drama of the seafront”.  This approach was aligned with the Public Realm Design Manual (PRDM) the UPC was updating at the time. The team aimed to ensure that there is a maximum distance of 350 meters to the nearest public open space, whether parks, sports facilities, accessible waterfronts or playgrounds.

This distributed, context sensitive approach to open space provisions also allowed to introduce a walkable and less built up neighbourhood, in an area that has been previously reclaimed, resolving a number of clashes between stakeholders. The UPC had initially requested that this area be left undeveloped, but later accepted some low-scale development to activate and frame the open space provided there, in recognition for the quality of the public realm proposed elsewhere in the masterplan, especially in proximity to the North Bay mangrove.

Responding differently to the mangrove found in the North Bay on the east side of the Reem Downtown peninsula was another important step in the journey that resulted in a complete re-think of public open space provision. In earlier iterations of the masterplan, Tamouh had envisioned building a seawall, “creating a hard line between the development and the remaining natural mangroves, at a cost of approximately $16 million USD”. Mangroves were perceived as unattractive and malodourous, “something to turn your back to rather than invite into your space,” explains Simon Green. Instead, the design team sought approval from the Environment Agency to restore better flushing of the mangrove, to enhance the health and resilience of this ecosystem and to use this as an amenity and ecological asset to enjoy experiencing as part of the distinctive Abu Dhabi landscape. A bridge towards an adjacent island was moved to prevent avoidable destruction of this valuable habitat and the overall masterplan was designed to “draw the naturalistic green qualities of the mangroves into the eastern edge [of the development] through a series of east west routes, visual corridors and adjacent public spaces.” The latter is proposed as a soft terraced edge supporting the conservation of the mangrove and facilitating partial managed access to this unique ecosystem through an elevated board walk system.

The street typology was also the focus of significant changes with the introduction of a pedestrian only axis, as well as strong efforts made to reduce street widths and encourage the use of xeriscapes (over irrigated lawns planted with palms) in larger highways featuring medians. “Our argument on this was simple: If, as a parent, I am happy to let my child run around, then let’s invest in a water resource – otherwise let’s find other solutions,” said Hrvoje Cindric.

If carried through all the way to detailed design stage and development, these seemingly small changes have the potential to set a significant precedent in Abu Dhabi, where international design practices give way to more place-specific, people-centric and planet friendly landscapes. The proposed profile and distribution of new plantings, as well the integration of existing natural ecosystem are critical building blocks of such transformation.

Just to the south east of Reem Downtown, across from an existing school, Al Fay Park illustrates a similar mindset, applied to a park creation project. This new facility is part of a wider infrastructure enhancement programme known as the “For Abu Dhabi / Ghadan 21” initiative, which has been allocated $2.18 billion USD to improve liveability.

Only time will tell how strong the seeds of change planted in Reem Downtown and The Fay will grow.

Al Fay Park (please note the park project was initially referred to, during its design phase, as “The Reem Forest”):