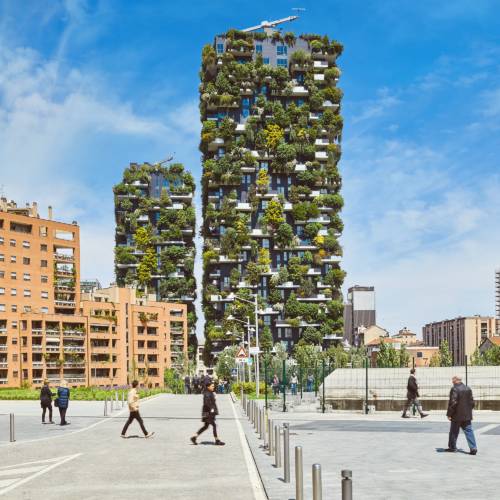 The two residential skyscrapers (reaching 112 and 80 meters respectively) feature facades covered with the leaves of 800 trees (each measuring three, six or nine meters), 4,500 shrub and 15,000 other plants. The plants found on the façade make up the equivalent of over two hectares (ie over 20,000 square meters) of woodland and undergrowth concentrated into just 3,000 square meters of urban space. The trees chosen by Laura Gatti are mainly deciduous, which means the external appearance of the two towers alters as the leaves change colour over the seasons. The project team however did not look at vegetation as solely ornamental, but as an architectural building block that greatly contribute to and enhance its performances, which was key for allowing the building to secure LEED Gold certification.

Bosco Verticale’s green “second skin” absorbs about 19.000 kg/year of carbon dioxide. It shields its residents from noise pollution and filters fine particulates from car traffic. It also reduces energy consumption due to increased insulation against outside temperatures and shading. This keeps the building cooler during summer – a reduction of nearly three Celsius degrees – and warmer during winter, reducing the need for active cooling and heating of internal spaces. One study placed the approximate yearly energy consumption reduction from this feature alone at 7.5%. The green façade is also very effective at promoting biodiversity: its 60 varieties of trees and 94 varieties of plant provide a home for an estimated 1,600 birds and butterflies. To help protect the vegetation against pests, 1,200 ladybirds were released across the planters of the buildings.