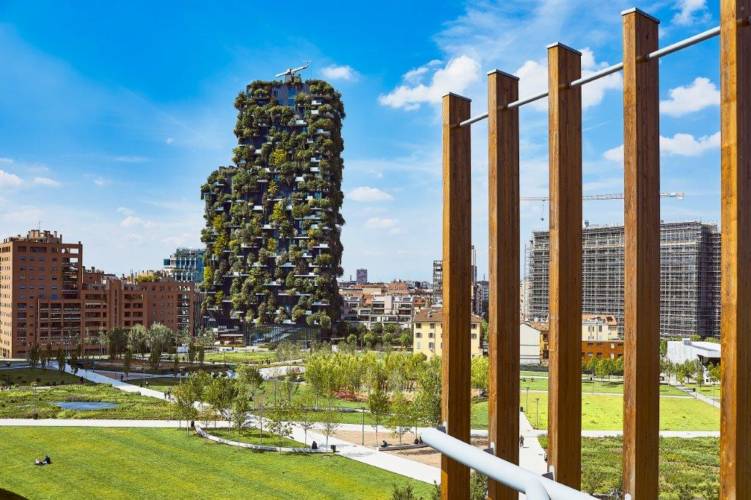 This pioneering approach to facade design meant that a large number of performance criteria had to meet the approval not only of the landscape consultants and the structural engineers (Arup), but also the project’s insurers and legal team. Extensive research was undertaken over three years to understand the requirements of the vertical planting, select the most appropriate nursery stock and address safety issues.

The trees and other vegetation found on the façade are grown in planters located on the outside edge of cantilevered terraces that are just over three-meter-deep in plan. The length of the terraces varies up to 14 meters. The profile of the terraces repeats every six floors, while the plant containers have variable layouts.

The required load support for the terraces was determined by the weight of the deepest plant container, with large trees (nine-meter tall) installed every thee meters, and medium trees (six-meter tall) installed in the remaining space between the large trees. The trees generate the most significant part of the load, not so much in terms of weight, but in terms of wind force that they transfer to the structure. Defining the dynamic loads was therefore a fundamental part of the design process. It was assessed through scale-model and full-scale tests.

For each tree species selected for one of the three size profiles used on the facade, analyses were conducted to determine maximum canopy dimensions, location of the centre of gravity, and air permeability. An experiment at 1:100 scale was conducted in the wind tunnel of the Politecnico di Milano. This allowed to define local wind phenomena around the façade and helped identify the most exposed locations. Ensuring the stability of the trees in these locations was a particular challenge. The soil had to be dense enough to provide the roots with a firm grounding, but not so heavy as to avoid placing excessive structural demands on the pre-stressed concrete balconies. Trees in those positions (about 6-7% of the total) were carefully selected and fitted with a third anchoring system, an underground steel frame connecting the roots to the inner face of the planters. Additional full-scale tests were performed in the “Wall of Wind” tunnel of the International Hurricane Research Centre of Florida International University, allowing to determine the aerodynamic coefficient of the trees’ real dimensions as well as to confirm the design values applied to the project and the stresses that would be placed on the tree restraining systems. The test wind speeds were 67 m/s (ie 150 mph), which is considered extreme for Milan.