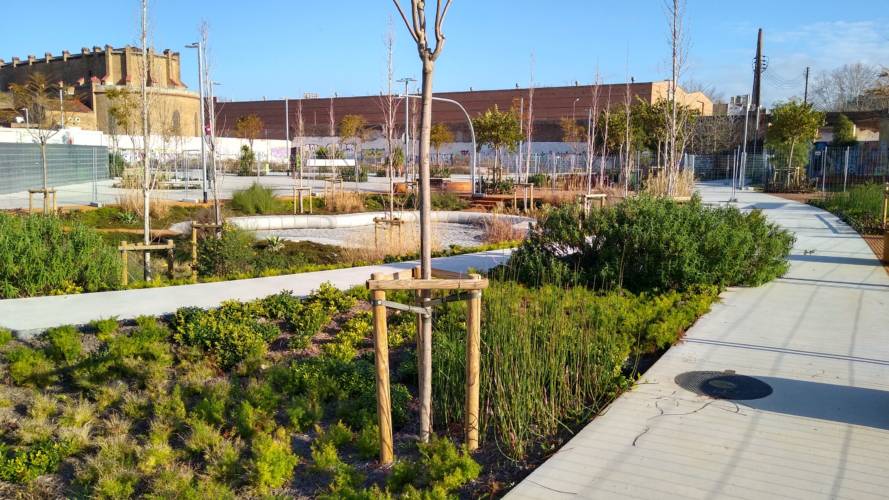 The implementation of some of the ambitions laid out in the Green Infrastructure and Biodiversity Plan 2020 experienced renewed momentum with the launch in May 2017 of a Stimulus Programme for the City’s Urban Green Infrastructure, which increased budget allocation towards capital investment. This renewed momentum was further accelerated by the publication of Trees for Life: Master Plan for Barcelona’s Trees 2017-2037. While the increase in tree canopy cover, the diversification of tree species so that no single species represent more than 15% of the total population and the adoption of more tree-and wildlife-friendly pruning regimes were objectives already spelled out in the Green Infrastructure and Biodiversity Plan 2020, City staff soon realised that considerable more dedicated strategic planning was needed to make progress with increasing the presence of trees. “Trees have needs of their own, therefore they require a strategy of their own,” explains Gabino Carballo. “We realised that the understanding of trees in the city is very limited” he adds, and as a result “what was initially going to be an internally produced document turned into what is probably the most widely consulted plan in the history of the city’s administration, we held 54 working sessions involving over 700 participants from wide ranging background including arboriculturists, tree suppliers, professional associations, citizen representatives and community groups, as well as other public institutions such as the public health authority, Barcelona Regional (the metropolitan agency), the agency that grants licences for outdoor terraces, people in charge on building works, the people that manage energy, the people in charge of urban design, the rubbish collection services, we really spoke to everybody. We also talked to the gardeners, the people who work on the ground, some of whom had probably never been consulted ever on the work. These people manage trees, manage lawns, but they were never asked: how do you think should trees be managed?”

Both the Stimulus Programme and the Tree Master Plan have measurable targets, detailed workplans and robust monitoring provisions, with a requirement for the Parks and Green Space Department to report on progress on a monthly basis. This together with the increased budget allocation mentioned reflect a growing awareness of the importance of trees and other green infrastructure as well as healthy natural ecosystem to Barcelona’s ability to reduce the city’s contribution to climate change while reducing its vulnerability to on-going inevitable changes. All key objectives of the Green Infrastructure and Biodiversity Plan 2020, and of the subsequent Stimulus Programme and the Tree Master Plan are prominently featured in the city’s Climate Plan 2018-2013.

For Barcelona’s densest areas, such as the Eixample, success in increasing the presence of green infrastructure has primarily relied on four programmes – all of which have been promoted by the plans and investment framework mentioned above: the superblocks, the green corridors and the reclaiming of inner-blocks.

Both the superblocks and the green corridors programmes stem from a simple, mathematical observation: “Barcelona dedicates 70% of public space to private-vehicle transport, which only accounts for 17% of the journeys made by its citizens. The overwhelming majority of journeys (83%) are made on public transport or bicycle. It’s essential to reclaim public spaces for the majority (…). Urban greenery is a key part of the change of model towards a healthy, living city for walking in. It opens up a new perspective where it is pedestrians and greenery, rather than spaces for cars, that are the civic cornerstones of the city” (opening statement of the Stimulus Programme).