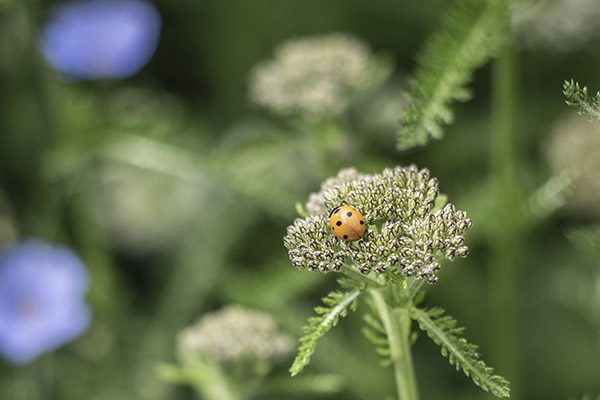 As mentioned, reduced maintenance needs are a key goal and outcome of this program, by design.

All of the above categories reduce maintenance needs, both immediately and over the longer-term. Traditional mown turf lawns are high maintenance, requiring regular mowing, weeding and irrigation during the summer. They also often need to be re-seeded or re-sodded of they are damaged as a result of summer drought, or pooling water.

Vancouver is notorious for its abundant winter rains, but it also experiences some of the driest summers in Canada, so such responsive maintenance is often necessary for traditional mown turf areas. Converting these spaces into meadows reduces the need for mowing, and our monitoring data demonstrated that meadows are more drought-resilient and hold water better during dry periods, so they also reduce irrigation needs. Additionally, we hypothesize that the variable root structure of meadows compared to monoculture grass turf supports infiltration and may alleviate wintertime pooling, flooding and surface erosion during the rainy season.

Overall, the result is a transition from high-maintenance mown turf to biodiverse, low-maintenance natural areas that can better cope with a wider variety of extreme weather conditions.

Six sample parks were visited weekly during the summer months (June, July, August) to assess the impact of maintenance changes on local urban ecology. During these site visits, staff counted the abundance of pollinating insects and birds, bloom species, moisture and temperature readings. As a control, adjacent traditional lawn sites were assessed using the same protocol, and their data compared.

We also accept public feedback on this project by e-mail and on social media which allows us to understand the perceived benefits and challenges of this program from the public’s perspective.
Additionally, we have on-going research partnerships with several non-profits and university researchers to monitor and evaluate the effects of this program. Each of these scholars use their own rigorous research methods, some of which include species transects and insect specimen collections. Some findings are described below, in the subsequent questions.

In some neighbourhoods, we received mixed feedback about the meadows pilot sites. Some park users were enthusiastic about the ecological benefits, finding that the changes enriched their overall park experience by providing new opportunities to connect with nature.

We also heard from people that clean edges and pathways are important for accessibility and maintenance. In response to those concerns, we adapted designs to emphasize these “cues to care” (central paths, perimeter treatments and increased monitoring) in our next phase of implementation. The “cues to care” we use are supported by scholarly research, community feedback, and maintenance considerations.

Additionally, we have a hazard response plan associated with the meadows. We heard concern from some residents that perceived dry, late-summer meadows to be a fire risk. Although our field data shows that pilot sites are actually cooler and moister environments, we’ve developed this hazard response plan so that we can have an incremental and measured approach to mowing and other response measures for extreme heat and drought, rather than responding reactively when there is a high level of public anxiety about fire.