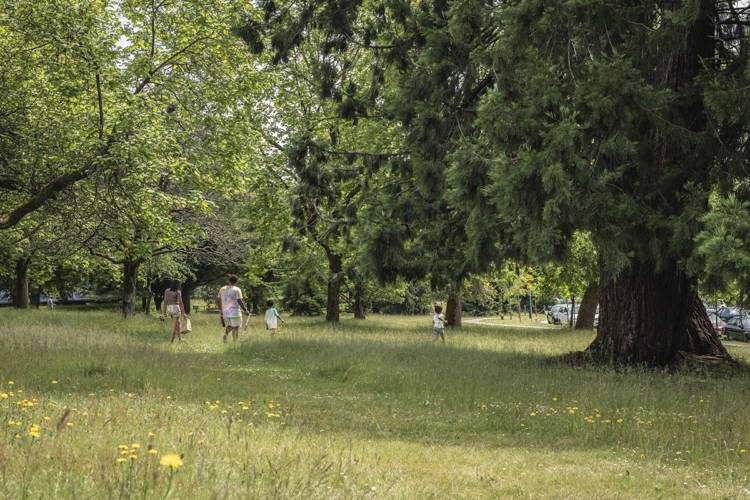 A lot of the work is supported by a reprioritization of management practices rather than adding in new resources; in fact, low-intensity meadow sites require less financial support compared to conventional turf, and logistical support needs will subside as we troubleshoot and iterate the program implementation based on pilot findings. An economic case study of the maintenance costs of City-owned turf assets in Trois‐Rivières, Canada, suggests that cost savings of 36% may be possible with a modest reduction of mowing frequency. This study included costs of workers’ salaries, equipment and fuel, but did not include fertilizers or pesticides, nor any indirect economic benefits such as increase pollination, carbon sequestration, etc.

In meadow sites, maintenance staff will spend less time mowing, but will need to maintain the edges and trails, as well as monitor and manage garbage and weeds.  We have supported the enhancements with seeds ($45,000) and planting ($10,000). We will also be purchasing multifunctional maintenance equipment to support the annual mowing ($130,000).  Since we are including perennial species in the seed mixes, the need to reseed sites will also be minimized.

We hear often from Indigenous partners and the host First Nations (Musqueam, Squamish and Tsleil-Waututh) about the importance of working with the land instead of against it. This project was an opportunity for us to incorporate this piece of Indigenous wisdom into management practices.

The challenges this project aims to address (biodiversity loss, low access to nature, etc.) are symptoms of a colonial system of land care. Colonial systems create a hierarchy of values: practices and norms that don’t conform to dominant colonial thinking are displaced and erased. What this means, in practice, is that many ways of relating to land are excluded from city parks because they do not fit the mould of how parks “ought” to be used (i.e., for recreation or aesthetics, but not ceremony, foraging, etc.).

This pilot project is one piece of a larger puzzle to decolonize park management. Although our urban meadows are novel ecosystems, they have been able to support native animals and insects, and plants that are culturally important to Indigenous people but rare in the city. One example of such a plant is Camas, a flowering bulb that served historically as a starchy staple food for many Coasts Salish peoples.

In many ways, the meadows pilot challenges colonial standards of “horticultural excellence” that are upheld in parks and recreation systems globally. Using a decolonial lens, we can better see the benefits that naturalized spaces and relational practices provide. Through meadows, we are striving to uphold multiple land stewardship practices and values.

We have evidence of support for this project through the involvement of five university-based research partners and seven core citizen science groups. The seven community-based groups represent a blend of arts, culture, youth and environmentally focused organizations throughout the city. Additionally, we received 33 emails from members of the public, of which the majority (22) were expressing their strong support and enthusiasm for the meadows. Although no record was kept of phone calls, staff recount a similar pattern, with the majority of public feedback being supportive of the meadows. It was partly this wide support for the meadows project, combined with its demonstrable benefits for biodiversity and ecosystem services, which prompted our elected public officials on the Board of Commissioners to renew and expand the pilot project in 2021.