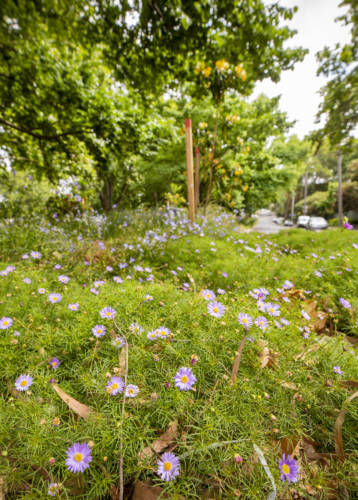 Where are the City of Melbourne’s greening initiatives headed next?

One direction is to place a greater emphasis on getting the private sector to make stronger contributions to the City’s urban greening effort, an area where the municipality’s performance is not as strong as some of its neighbours in the Greater Melbourne Area. Such comparisons have become easier now that a metropolitan scale initiative has been launched to align around common minimum standards the different urban forestry and greening initiatives undertaken by local city administrations. The City of Melbourne is looking to adopt a greening factor, comparable to that in use in Seattle, in the US or in Berlin, in Germany or London in the UK. In the associated calculation tool, tree canopy, especially from trees planted directly into the ground, is given the highest score.

Another key direction is an increased focus on urban ecology. Enhancing urban ecology was identified in the 2012 Urban Forest Strategy as the next logical development of the City’s urban forestry work. Trees are part of wider ecosystems, which need to be healthy for trees to thrive. This includes soils, companion vegetation, and the associated fauna – birds, insects and other species that can help control pests and diseases. Implementation of the actions identified in respect to urban ecology in the Urban Forest Strategy led to the publication of the Nature in the City Strategy in 2017 and the hiring of a dedicated urban ecologist to oversee its implementation. Daily collaboration between ecologists and tree experts is resulting in better ecosystem outcomes for the city.

One of the flagship projects undertaken as part of the Nature in the City Strategy has been the prototyping of streetscape plantings for biodiversity. This has been led in partnership with academics from the University of Melbourne’s Green Infrastructure Research Group specialising in urban ecology (Nick Williams) and horticulture (John Rayner). This collaboration aimed at developing and testing the impact of an understorey plant palette that would enhance biodiversity in city streets by providing resources for birds, bees and butterflies. As with other urban greening projects led by the City of Melbourne, a large amount of documentation is publicly available about this work, including a comprehensive case study documenting the circumstances and lessons learned from the first four pilot streetscapes as of Spring 2020. The available documentation also includes the plant palette the research team identified to meet the horticultural and biodiversity criteria defined for the project. The goal is to enable and encourage other professionals, including other city departments and private sector landscape designers, to use such plant palette.

From a horticultural standpoint, the plant selection focussed predominantly on native perennial herbs, grasses and shrubs that were aesthetically attractive, required little maintenance and had high environmental tolerances, including to drought, waterlogging and compaction. The plant selection was further narrowed down based on scientific evidence that they could provide resources for birds, bees or butterflies – such as nectar and pollen for pollinating insects and small non-aggressive birds; larval food resources for local butterflies; seed and fruit for birds; nesting material for birds and solitary bees; and protection for small birds, for example, plants with dense and prickly foliage. The four first trials showed encouraging results on an ecological level, with a notable increase in the total number and diversity of bees observed. The bird population didn’t show any significant change, however, this was expected given the short timeframe involved: some of the shrub that can provide bird habitat is likely to be still too small to become attractive. However, the project also revealed some challenges in plant procurement and management.

With short timeframes to implement the proposed designs, the contractors who carried out the implementation didn’t have time to consider contract growing the plant materials.  Many species proved impossible to procure in the amounts needed for the projects. Substitutions had to be made that weren’t always satisfactory. The streetscape created also proved difficult to look after for the private contractors in charge of maintenance. Most are not used to recognising native plants (easily assimilated with weeds) or with management practices allowing natural dynamics such as self-sowing. The City of Melbourne ended up dispatching to the biodiversity streetscape pilot sites the maintenance contractor in charge of Royal Park, Melbourne’s largest inner-city park and the richest in native plantings. The long-term efforts that were made on supply chain and contractor management in support of the City of Melbourne’s tree-focused work will need to be extended so that its urban ecology aspirations can be successfully scaled-up.

While the four streetscape biodiversity pilots gave insightful answers to the question: “how can we increase ecological connectivity in the city?”, it still left unanswered the question of where such an approach would offer the greatest impact? A partnership between the City of Melbourne and researchers from the Clean Air and Urban Landscapes Hub (CAUL) was formed to help provide this information. CAUL is a consortium of four Australian universities funded under the Australian Government’s National Environmental Science Program. In the Linking Nature in the City study, CAUL provides a method for spatially prioritising projects for different guilds of animals.

The ambition for the upcoming years is for this exploratory and research-driven work on streetscape ecology to inform a new generation of Urban Forest Precincts Plans. As mentioned above, the existing precincts plans are nearing their completion date, scheduled for 2022. Preparations of a new generation of plans will start soon with the belief, rooted in experience, that incorporating the findings from the urban ecology studies and pilots conducted to date will provide a reliable mechanism to turn such emerging practice into business as usual.