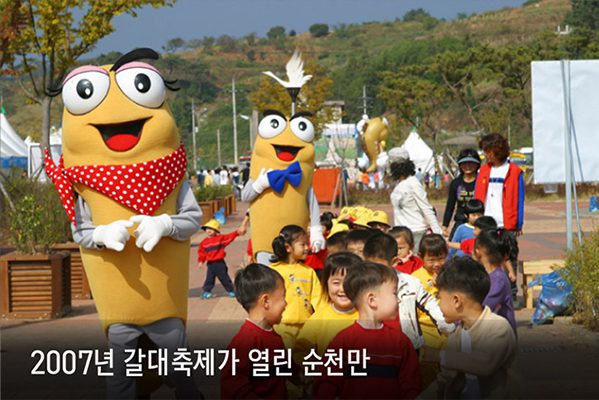 In 2008, Suncheon city divided the space compartment into four major areas, centering on the river (Dongcheon) that vertically connects the city centre and Suncheonman Bay, and reflected them in the urban plan.

In order to preserve the Suncheon Bay wetland, restaurants and residential facilities that were operated close to the reed forest were relocated, the restrictions on visitor vehicles were taken effect. And 282 electric poles were removed for biodiversity of wetland creatures. In addition, paddy wetlands were created by restoring landfills, agricultural lands, and wetlands in the riverside area. In 2015, the farmland in the Dongcheon estuary adjacent to Suncheonman Bay and 5.394㎢ of river estuary were designated as national wetland protected areas and registered as Ramsar wetlands in January 2016. And Suncheon city established an integrated wetland management system linking major ecological axes of wetlands such as coastal wetlands, estuary wetlands, and paddy wetlands.

The Suncheonman Bay Protection Citizens’ Conference, consisting of more than 30 civic groups in Suncheon, received a petition from residents in October 2010 and they passed the nation’s first ordinance submitted by citizen in March 2014. The petition required 5,218 signatures from citizens for ordinance request process, but more than 9,200 signatures was submitted.