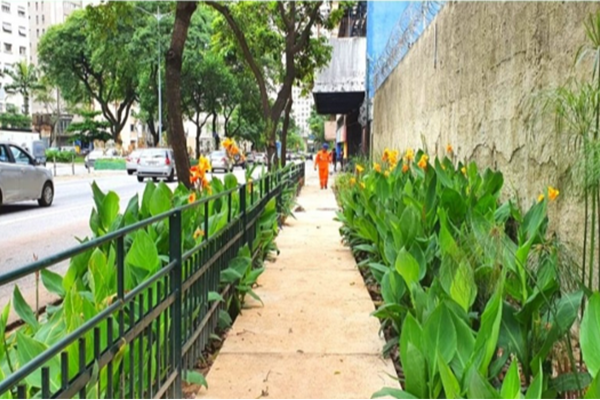 The environmental impact is evident, as it expands the permeable coverage of the city, slowing down the speed of surface waters and collecting water in the subsoil which can then be reused by the existing vegetation. In the urban conservation woods this situation is easily observed, as the tree seedlings from the Tamanduateí River have shown a vigorous development, not only because of the water available, but also because of the conservation treatment, the use of municipal organic compost and the soil cover, which has made these spaces successful and has enhanced biodiversity.

In the Rain Gardens, the population immediately notices the impact of removing concrete and planting seedlings and ornamental plants as substitutes. The green spaces are gardens and small environments for collective and public use in areas which were previously intended for parking lot. The place turns into a recreation, leisure and landscaping option for the city and creates environmental and community awareness.

The interventions have the approval of the residents who have recently requested the installation of new units in other locations. In some of these cases, the population has planted new seedlings in the gardens, demonstrating its participation and care, key elements for the success of the initiative.

The Rain Gardens minimize effects of heat islands, increase air and soil humidity, decrease the risks of flooding, and make the city more pleasant, people-oriented, with an increased and diversified vegetation coverage, as well as promoting alongside the population a critical awareness of environmental issues.