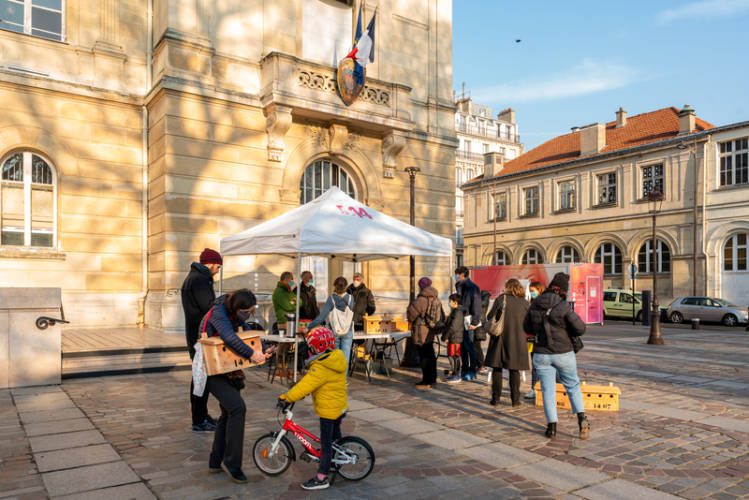 Within the participatory projects that the city supports, the local dimension is always privileged to limit transportation and the depletion of resources from elsewhere. In this respect, Community gardens are invited to make their own planters and other amenities. Among the services offered by the city, there are also hands-on workshops at the Gardening Pavilion (Maison du Jardinage) and online tutorials to become as autonomous as possible and limit the purchase of finished retail goods. In the Community gardens, there is also no electricity available as the activities are supposed to be manual and take place during the day. Regarding the carbon footprint of urban agricultural farmers, Paris ensures communication between members who wish to pool their deliveries. The city is also developing the availability of market stalls at open air food markets and the sales of their goods in public space to facilitate short supply chains. Other urban agriculture stakeholders have also chosen to market their products for direct sale or to distribute their products with a trailer bike. Finally, urban agriculture is naturally virtuous because it favours manual activities at the expense of large mechanical machinery. The use of chemical and environmentally hazardous products has also been prohibited by a municipal decree since 2019.

The City of Paris tries to be exemplary in the support it provides to project leaders. It decided to subsidize in kind the Community gardens to help them become water-efficient by distributing water recuperators and ollas. The choice of these materials was also well thought out: nothing made of plastic as Paris is engaged in the fight against this material, rather barrels of recycled wood and microporous terra-cotta ollas. The use of ancestral solutions, even from other parts of the world, is indeed considered interesting. In addition to ollas, we can also mention the «keyholes» which allow the recycling and composting of green waste on site to directly nourish the soil. Consideration is also being given to allowing Green permit holders access to non-potable water outlets to water their plants and thus limit the consumption of drinking water for gardening activities. With regard to the choice of plant species, the city anticipates the climate change already underway by giving priority, apart from strictly regional species to those characteristics of the Mediterranean climate. Indeed, the Parisian climate is warming and if the annual rainfall is not expected to vary much, its distribution should evolve with longer, more intense, and more frequent drought episodes in the summer and more punctual and intense rainy episodes the rest of the year.

Since Paris is very mineral and urbanized, it is impossible to plant without using external natural resources. The city nevertheless takes care to minimize the negative impact of its actions on other territories. Consequently, if the use of soil is authorized to enrich the topsoil, it must not be constituted from peat. Paris also has a Rainwater Plan which aims to improve rainwater recovery. For example, Oasis courtyards are disconnected from the storm water system, allowing rainwater to be collected directly by the plot. In the same way, a call for projects was launched with designers to create a kit to connect to non-potable water outlets. Presently, two project finalists are under trials by a couple of Green permit collectives to select the winning model to be mass produced and donated to licensees. This will also limit the use of potable water used to water plantations by Green permit holders on public land.