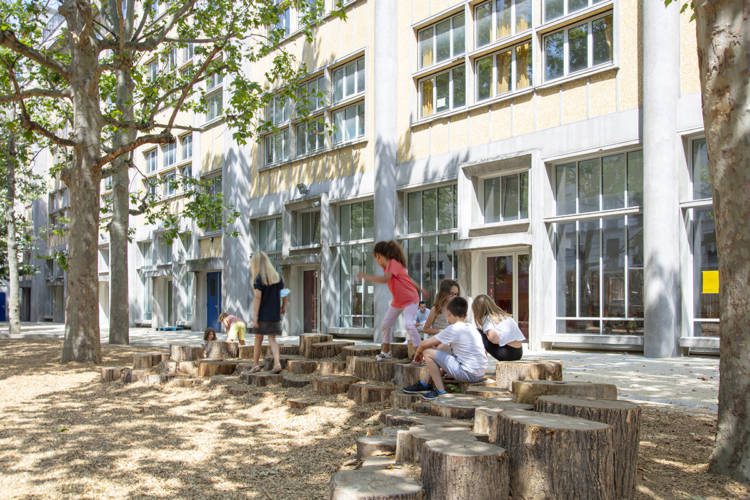 The loss of nature in the city has caused a decrease in environmental qualities, and on the counting of fauna and flora species. Due to global warming, heatwaves have become more and more frequent in the city, bringing consequences to every living being (animal, human or vegetal) of the area. In the Oasis project, children are the priority target group, since they suffer from the consequences of climate change in their daily lives. The asphalt-covered schoolyards increase city’s temperature, while failing to offer good quality development and playing spaces for children. Furthermore, they lack connection with nature, and lose the chance to learn about biodiversity and the benefits of nature as a part of the pedagogical programs.

In order to respond to those identified issues, the Oasis project has pledged to dedicate 30 -50 percent of the schoolyards’ total surface to natural environment, and to implement pedagogical activities for environmental education. In that matter, pedagogical gardens have been created, along with natural playing areas. Children learn how to interact with nature and how important it is to take care of it for the benefit of the planet.

Another target of the project is the vulnerable population in the local community, such as the elderly, who are particularly at-risk during heatwaves. For that reason, schoolyards’ openings on Saturdays seek to create ephemeral pocket parks in the city, with comfortable temperatures for them to enjoy, close to their homes.

By the end of the century, Météo France projects an increase in the average annual temperature of 1°C to 4°C for a reference value of 12.4°C, as well as 10 to 25 days of heat waves. The decline of biodiversity and the threat to fragile natural ecosystems is a consequence of urbanisation and densification.  To face these risks, elementary and middle school schoolyards have been identified as important assets: they represent a total city’s surface area of more than 70 hectares and are evenly distributed over the territory. Mainly asphalted and impermeable today, these spaces participate massively in the development of the urban heat island effect. Moreover, they are closed to the public on weekends, despite the fact that Paris lacks convivial, refreshing spaces that are accessible to all.

Regarding these challenges, some of the main benefits of the project are: