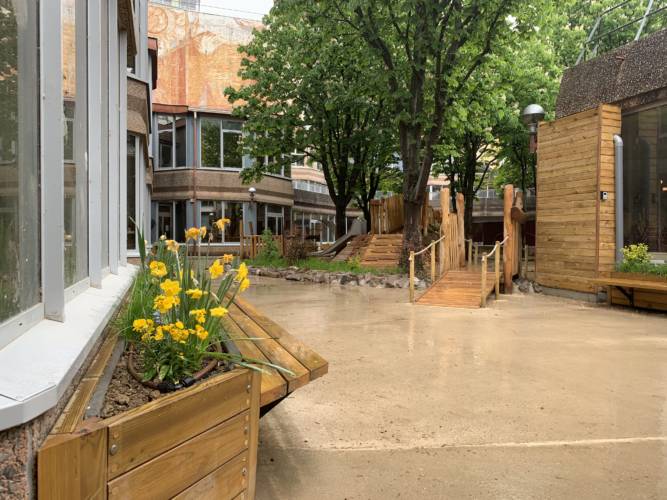 Paris is both a very dense urban environment and at the heart of the Île-de-France region. The city is subject to severe constraints: its territory is surrounded by an urban highway, which 4 million people pass through every day, and its neighbouring municipalities are themselves also highly urbanized. Despite this unique context in France, Paris is developing nature-based solutions following the International Union for Conservation of Nature (IUCN) framework, which consists of renaturing and ecologically restoring artificial urban plots. These solutions are based on scientific studies and have the double objective of addressing a societal problem and bringing a strong added value to biodiversity. They simultaneously contribute to the well-being of Parisians, commuters and visitors through the development of extinct natural ecosystems. One of the levers for mitigating weather hazards (heat waves, rains, and high winds, etc.) is by reconquering artificialized land and building the Parisian brown infrastructure through the removal of tarmac and vegetalisation of a portion of the public spaces. Part of the solutions being implemented include cooling techniques for the city, retention of rainwater, protection of water resources, carbon sequestration by reclaiming artificialized land that will be vegetalised and planting 170,000 trees by 2026, 154,000 of which will be on reclaimed land. The strengthening of the natural heritage contributes to the emergence of new jobs and social integration, as well as developing local recreational areas, ecotourism and education.

Paris has mapped its local green and blue infrastructure known as the Paths of Nature. These networks continue to evolve thanks to the ongoing ecological diagnoses of its territory, allowing us to follow the evolution of its natural heritage composed of green spaces, natural spaces, identified priority habitats as well as animal and plant species. The guidelines derived from the nature paths enable the establishment of the appropriate provisions and prescriptions to maintain and strengthen the urban biodiversity on its territory and beyond, with the neighbouring municipalities and counties. The selection of specific plants also contributes to the improvement of faunal biodiversity (nectar-filled plants for wild pollinators, bushes and grasses favourable to sparrows). The strengthening of the green and blue nature paths contributes to the adaptation of the city to climate change (cooling and better recovery of rainwater). The landscaping projects implemented according to the priorities that emerge from this mapping also contribute to the beautification of the public space and to the improvement of the living environment, which is more serene. The greening of the public space is in fact entrusted to the road services who accompany this type of construction work in favour of soft mobility (bike paths, widened sidewalks, removal of parking spaces), hence an effective double action to fight against noise and air pollution. Finally, the possibility for Parisians to maintain certain plots themselves strengthens social links on a local level.