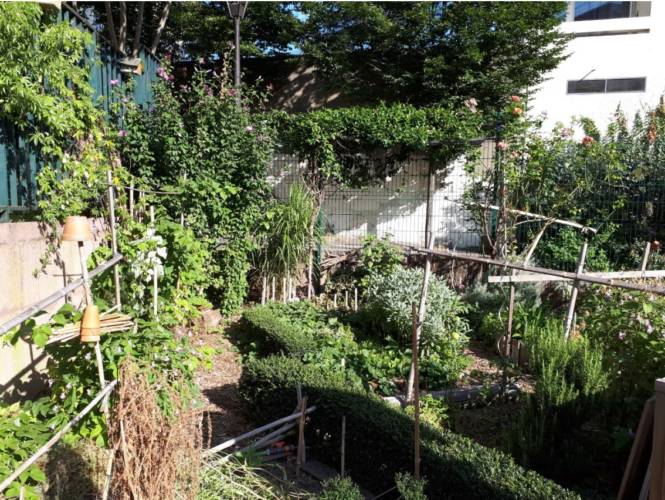 Promoting biodiversity, that is to say wild flora and fauna, is important in terms of maintenance, whether in regard to the time spent or the cost. This point is very often raised by the City’s services to project promotors during appraisals to encourage them to review their practices. In the case of a condominium who wants to be advised on the plantation of its interior courtyard, they would be encouraged to opt for a flowery meadow over a mowed lawn. The choice of plants and trees which are more resistant to climate change and aggressions is also an advantage as these plants will fare better and live longer. These changes are well received by those in charge of the financial and technical maintenance. On the other hand, it is more problematic with respect to the general public as it requires a fresh outlook on the city. Letting nature develop is still too often perceived as a failure of management or even as dirty. There is a similar problem with lawns in green spaces, users need to understand that a lawn’s natural cycle is in fact to be yellow in the middle of the summer. The city must therefore accompany the public to bring about a change in mentality on these subjects.

Paris communicates its naturalistic data to regional and national databases, finances research and scientific laboratories, carries out the mapping of its green and blue nature paths via a Geolocation Computer System, participates in regional action plans on chiropterans and donates and calculates its Singapore Index, an international self-assessment tool allowing governments and local authorities to measure the state of their biodiversity and the progress made. The city also has a tree-specific database, where each tree on the public space has been given an allocation number. Regarding the Green Permit program, the City has developed a field application that allows it not only to instruct all new applications but also to follow each permit throughout its duration (instruction, attribution, monitoring of land, repeal or renewal) and to make extractions for statistical purposes on Paris as a whole, by district or typologies (tree bases, planters, pits, and others).

Mobilizing the territory to increase the impact of public policies effectively means listening to users to help them with their initiatives. This is particularly the case for the Green Permit scheme created in 2015. Its success from the outset forced the administration to adapt their organization and their resources. The dedicated team has been strengthened by new hires and a specific field application has been designed internally to automate the processing of requests and ensure a better follow-up. Since then, difficulties faced by licensees regarding tree bases have emerged, as they were previously responsible for installing the barriers, soil, and signage themselves. These elements proved to be a blocking factor for many of them and deterred them from implementing their license. A public contract is now being prepared and will be operational beginning in April 2022. The city will entrust a company with all of these amenities, allowing licensees to start gardening on the public space. Isolation of individual licensees may also explain the failure of some licensees. The city is now working to improve networking between licensees and also with the nearest Community gardens for gardening advice and the loan of tools. These gardens will act as a local relay in the field of participatory greening in order to foster synergies between these two proven programs.e practices.