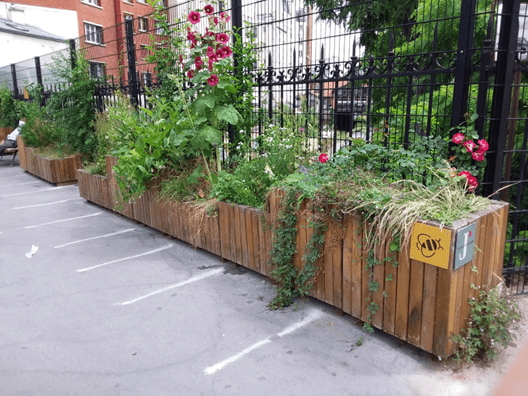 The Reinventing Paris program involves limited costs for the city, as project leaders are responsible for their economic model while generating revenue for the municipality through the sale of real estate or the payment of rent. Similarly, the green permit program costs the City little since it is up to the licensees to implement their projects (purchase of planters and plants) and maintain them over the long term. However, it does provide logistical support with soil and seeds. This assistance will increase in the coming months with wooden barriers provided and laid by the city around tree trunks. The financial feasibility of these actions is proven. Other schemes involve a more substantial financial investment. For Community gardens and «Parisculteurs» urban farm sites, it is up to the owner, therefore the city, to ensure the preliminary development work. The promoters of these projects also benefit from support throughout their duration which can be supplemented by punctual material assistance (financial grants or in kind) via thematic calls for projects or the « Paris Sème » scheme launched in 2021. Its second edition is scheduled in 2022 and provides these stakeholders in the sustainable agricultural sector direct access to investment grants in order to invest, for example, in both ground and logistical equipment (i.e., a cargo-bicycle).

Regarding innovative actions, several examples can be cited. The “Oasis courtyard” project of greening primary and junior high school courtyards to make them more welcoming and better adapted to climate change, is systematically being co-designed with the school community. Several dozen courtyards have already been created and all of them, that is to say 760 will be completed by 2040, covering nearly 73hectares/180 acres. The city has also decided to innovate by greening through urban agriculture. For example, the “Parisculteurs” calls for proposals were launched to promote the initiatives of private stakeholders on various surfaces (roofs or slabs, basements, in the ground or up walls) that belong to the city or to institutional partners, both in and outside of Paris. In the basement, we put the emphasis on the production of endives or mushrooms as well as micro-greens which are grown under horticultural LED lamps. On rooftops, the systems of hydroponics, aeroponics, aquaponics, trays or mounds of earth are used depending on the maximum bearing capacity of the proposed surfaces. In open land, projects adapt according to the degree of pollution of the land (raised bed production or field vegetable crops). Parallel to this initiative, the City has been providing financial support since 2021 to sustainable local agriculture stakeholders through the “Paris Sème” (Paris Plants) initiative. This is a call for projects that will provide financial support for the development of structures already in place or in the process of being created, through investment grants.

The Oasis courtyards bring together several partners including the Boards of Architecture, Urbanism and Ecology of Paris, the United Federation of Teachers of Paris, and the National Weather Service. For urban agriculture, the city runs a network of institutions, researchers, associations, and businesses including AgroParistech, the Chamber of Agriculture, as well as ethical banks such as Miimosa, La Nef, ADIVET, Astredhor, etc. The city also supports a professional training program: a Professional Certificate for Agricultural Operations Management (BPREA) developed at the Breuil school, a satellite organization of the city. Moreover, the winning structures that support Parisculteurs projects come from various backgrounds including businesses and associations. Finally, some projects are based on productive economic models while others are part of hybrid models with educational, participatory, or landscaping vocations. Additional structures allow actors outside of this sector to get involved in the renaturation of the city. This is the case with the Green Permit which concerns individuals, businesses or associations and is open to people without any prior gardening experience. The Reinventing Paris scheme was launched in 2014 with calls for projects for innovative urban ideas from promoters, investors and designers from around the world on Parisian sites, which belong to the City of Paris or its partners. They are invited to present their ideas for these locations, the winners can then buy or rent these spaces to carry out their projects, some of which have an important component dedicated to vegetalisation (the Fertile Island) or urban agriculture (the Railway Farm).

In terms of citizen mobilization, every action necessarily takes the form of support from the territory. All amateur gardeners working under the green permit or in Community gardens do so on a volunteer basis, through actions that would otherwise not be done or only at the expense of the city. To ensure that this support is as effective as possible, it is recommended that applicants for a green permit submit their project in the form of a collective. This mobilization of local residents does not only concern the subject of revegetation. The «sparrow» scheme launched in 2021 aims to involve local volunteers in the repopulation of sparrows in Paris. The city distributes nesting boxes to inhabitants in areas deemed of interest and corresponding to colonies of sparrows weakened but still viable. In return, the residents install their nesting box and inform the city of their colonization by sparrows. This information helps update the database of the Bird Protection League, with whom the city is a partner. For urban agriculture, « Parisculteurs » organizes educational workshops and the sale of delicious, local products to Parisians on their sites. Their presence on the Parisian food markets during the Markets Festival 2021 was well received. This action should therefore be renewed on a regular basis in order to provide residents with access to quality, local products grown sustainably.