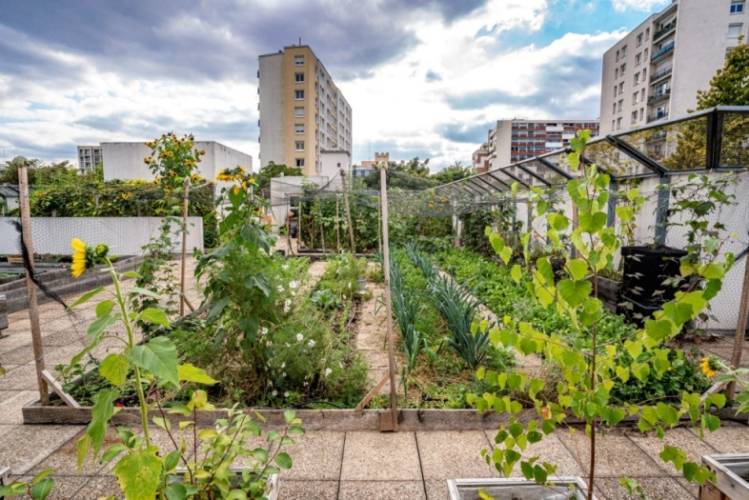 Under the previous mandate from 2014-2020, the city aimed to triple the surface area of urban agriculture in Paris to reach 30 hectares of agricultural space. This goal was achieved with a total agricultural area of 31 hectares. Over fifty projects are now operational today thanks to the «Parisculteurs» program. The launch of the fourth edition in 2021 made it possible to create 17 new sites: 11 sites in Paris and 6 sites in neighbouring municipalities of Seine-Saint-Denis (4 sites), Val de Marne (1 site) and Yvelines (1 site). A total of 14 hectares were made available, including 1.6 hectares in Paris and 12.4 hectares in the nearby municipalities, of which 9.5 hectares are actually owned by the City of Paris. This 4th edition has enabled 12 new structures to join an already established network of 55 «Parisculteurs» project holders, further strengthening the ecosystem in place. Regarding participatory vegetation, the results are just as positive: Paris has 150 community gardens and creates approximately 10 new ones every year. The same success is true of the 2,800 Green permits. Their quality has also tended to improve as project promoters are now asked to give priority to greening in the ground (around tree bases and pits after removing the tarmac) versus the use of planters and flowerpots.

The Biodiversity Plan established by the City of Paris plans to use at least 50% of species which are of regional origin in the planting of its green spaces. The City’s horticultural production centre has adapted its supply accordingly to not only promote biodiversity but also to improve adaptation to climate change and resistance to insects and fungi by emphasizing for example the plantation of a greater diversity of tree species. The city carries the same rhetoric towards all the project promoters it supports. For example, under the green permit, seeds which are distributed free of charge to permit holders who request them are sourced from regional species. The city has also developed a list of preferred plants. These were chosen because of their regional origin but also based on other advantages: high tolerance of an urban environment, low allergy index, high melliferous potential favouring the presence of wild pollinators, grasses favourable to sparrows… This list is available to any project promoter who requests it: holder of a green permit, community garden, institution or business.

Paris is an expert member on high density environments in work groups such as « Collectivities & Biodiversity » and « Ecosystem Management » of the French International Union for the Conservation of Nature (IUCN) Committee, along with the Urbanism Club, Built and Biodiversity (U2B) of the League for the Protection of Birds as well as in steering committees such as the Foundation for Research for Biodiversity, the Regional Agency for Biodiversity (RAB) of the Ile-de-France in the junior high schools of local authorities. The Oasis courtyards are of interest to the RAB and the Ministry of Ecological and Solidarity Transition, who ask us for advice. Paris also regularly exchanges with other French cities and the interest is reciprocal: before launching our Green permits in open pits, we made a census of the experiments already conducted elsewhere (Bordeaux, Lyon, Strasbourg, Tours, etc.). It generally emerges from these exchanges that the constraints on Paris are stronger than in the provinces (strong mineralization of public space, urban density, intensity of uses). Finally, the Montreal urban agriculture laboratory and the City of Montreal were so inspired by the “Parisculteurs” that they created “Les Montrealculteurs”, a program accompanying the incubation and networking of local agricultural stakeholders in order to facilitate the establishment of commercial urban farms for the social economy. The City of Amsterdam is also interested in the functioning of «Parisculteurs» and is developing a similar accompaniment. Visits from foreign delegations are regularly organized by the City of Paris.