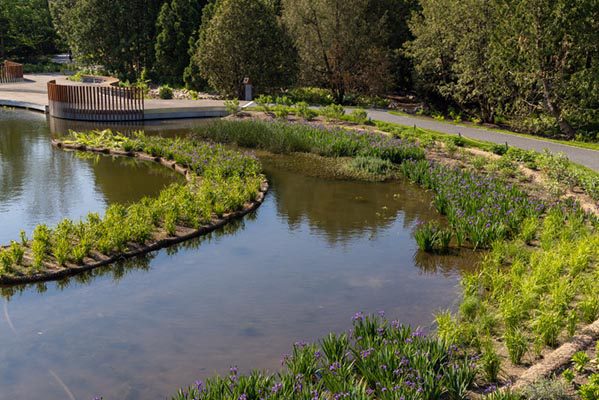 Photo by the Montréal Botanical Garden

The initiative was conceived based on years of research by the garden’s team of scientists, world leaders in the field of plant-based solutions. The team has conducted several projects for soil decontamination, constructed wetlands and revegetalization initiatives across the Québec province and the City of Montréal. It is worth noting that the “Parc-Plage of the parc Jean-Drapeau”, a safe and clean swimming area in the middle of the St-Lawrence river, is a long-term success of a plant-based project. The water quality is significantly improved by a plant-based system installed by city employees and scientists. In the east of the island, a particularly industrialized sector, a 4-hectares-pilot-scale phytoremediation experiment is set up by the scientific team of the Curator of the Botanical Garden. It constitutes a real green lung for the neighbourhood which the population already appropriates. Implanted everywhere in the Botanical Garden, the stations of the pathway to phytotechnology’s are a unique demonstration of our knowledge and our know-how.

The idea is precisely to demonstrate the best use of plants as an innovative and effective solution to environmental problems. Each of the Stations set up demonstrates the effectiveness of plant-based solutions for a particular application (water treatment, soil decontamination, invasive plant species, etc.).

The information provided for each of these Stations will make it easier for managers to consider and implement similar green infrastructures elsewhere in the city. The most recent example of feasibility is the implementation by a team of experts of the Botanical Garden of a large phytoremediation project for the treatment of contaminated soils in the east end of the City of Montréal – the largest project of its kind in Canada.

Cities around the world are facing environmental challenges and the use of plants to solve these issues is an innovative and sustainable solution.  The initiative was conceived as an exemplary set of solutions to some of the problems of the Montréal botanical garden. These solutions are directly transferable to the entire City of Montréal and its citizens. The concept can also be shared among most cities in the world.

Plant-based solutions are inexpensive for the organization implementing them but offer great benefits to citizens. Increased vegetation cover generates ecosystemic services, provides habitat for wildlife, reduces heat islands, captures stormwater runoffs, and captures atmospheric carbon. The solutions to Montréal’s problems presented by the stations are ones that can be implemented everywhere by cities, as well as companies and citizens. As such, it stimulates scientific community interaction for the deployment of phytotechnology’s, the creation of green, plant-based expertise and start-ups.

For example, the team of the Montréal Botanical Garden has developed a partnership with the Shanghai Botanical Garden to co-create solutions adapted to China. The initiative was also the subject of a presentation which was given in 2018 in the Basque Country, this was a source of inspiration for the City of Vitoria-Gasteiz which relies on similar approaches for the development of certain neighbourhoods.