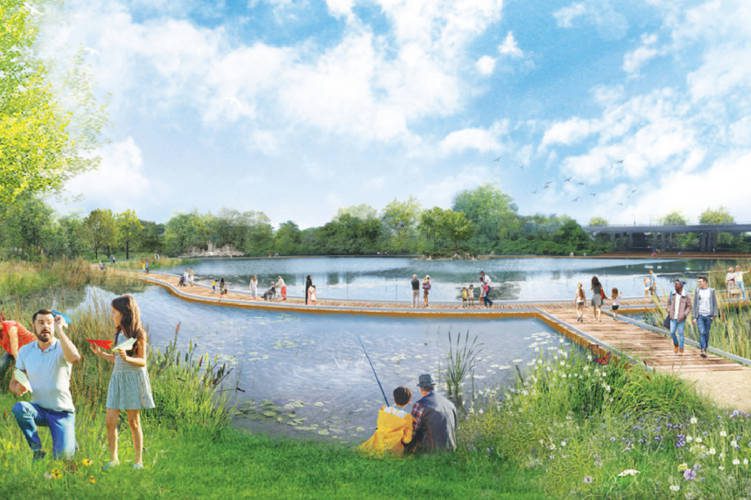 Reducing the carbon footprint is reflected in the Master Plan’s goal of carbon-neutral operations by 2030. To target upcoming actions and acquire a good base of initial knowledge, a GHG emissions status report was developed, in addition to a study that revealed the amount of carbon sequestered by all the trees in the park.

To achieve this goal of carbon neutrality, two approaches are being used: decrease emissions and increase sequestration. In the first, replacement of the vehicle and machinery fleet with electric alternatives has been initiated and GPS has been installed on all units in order to better understand the driving habits and raise awareness of eco-friendly driving among employees. Reducing emissions in Parc Jean-Drapeau also involves the use of renewable energy, a sustainable mobility plan that aims to remove automobile traffic from the park, and the objective of recovering more than 85% of materials by 2030. These reduction targets will be combined in an emissions reduction plan currently being developed.

With respect to carbon capture, the park’s new vision prioritizes a renaturalization of the land. The 30% increase in canopy by 2030, in addition to the 40% increase in stratified forest and wetland areas will ensure greater carbon capture by the ecosystems within the park. Sustainable management practices will promote a diversification of low vegetation, allowing for greater sequestration compared to monoculture lawns that are maintained by traditional mowing methods.

Given the increasing temperatures and heat waves, there is a significant need for cooling oases for citizens, both for their physical and psychological well-being. The Master Plan aims to reduce heat island surfaces by 20% through a process of demineralization: transforming asphalted surfaces to green spaces. Another impact of climate change is the increase in episodes of intense rainfall, flooding and drought. To ensure better water runoff management, four wetlands will be restored, including the redevelopment of a floodplain. These zones will improve water management and restore ecosystem services, such as carbon and pollution sequestration, water filtration, and biodiversity protection. Water filtration and ecological water management are also enhanced with phytotechnology’s, particularly two existing filtering marshes, but also the installation of green roofs. These contribute to a process of integrating climate change adaptation and mitigation measures into all new infrastructure and development projects, including improved building energy efficiency, to which green roofs contribute.

To enhance the resilience of our developments and ecosystems, native plants and biodiversity will be prioritized and protected. Exotic horticultural plants are increasingly being replaced by native perennials which contribute to biodiversity and are well-adapted to local conditions. Controlling invasive plant species is also a priority, with some areas already treated. A management plan for invasive species will be developed soon. For the lawns, the SPJD is testing the application of more ecological seed mixes in order to improve the biodiversity and resilience of these areas while reducing the need for frequent mowing.

In recognition of the ecological importance of soils, any fertilizers, pesticides and herbicides that cannot be used in certified organic farming, which are already minimally used at the park, will be completely banned from use within the park. This practice will minimize any potential pollution to the water, soil, and living beings within the park. The already restricted use of herbicides for the control of nuisance plants, particularly poison ivy (Toxicodendron radicans), will also be completely banned and replaced by ecological methods that have minimal negative environmental impacts.

In an effort to respect ecological processes, leaf and grass composting practices are gradually being implemented, which also naturally enriches of the soils of landscaped areas. Leaves that are harvested still have a second life, as they are used to produce compost. Finally, trees felled for safety reasons or because of disease are transformed into chips that are used directly on site.

In order to respect the soil and the natural ecosystems, areas that hold events will be restricted to well-defined and mineralized zones. This delineation will ensure, among other things, limited soil compaction and reduce damage to the vegetation caused by large crowds. This commitment includes an awareness campaign targeting visitors and promoters, informing them of the seven principles of the Leave No Trace ethic, including responsible trail use to reduce human impacts in natural environments.