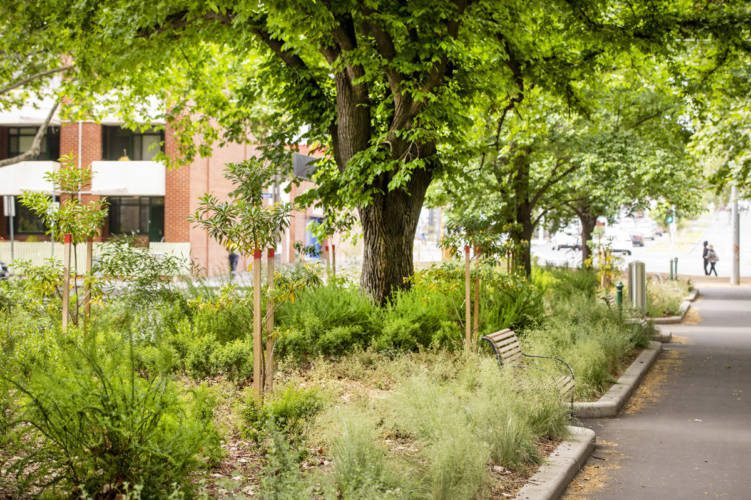 Public and political support was fostered by the incremental nature of the Grey to Green Program. The program commenced with smaller, less ‘controversial’ projects, such as the transformation of slip lanes completed successfully. These projects demonstrated the benefits of the approach before larger projects were initiated. In this way trust and confidence in the council’s approach were built over time.  The scope and scale of recent and current council works program is evidence of the value that this approach provides to enabling Council to deliver on its commitments to the community.

The longevity of this approach in adapting public road space for improved open space and greening is evidence of its feasibility as an affordable and practical way for local government to address the varied issues facing urban environments.

A forward plan of projects is already identified that will continue to address increased open space provision, access to nature and climate resilience.

Projects for Grey to Green are delivered through a variety of funding sources. By developing a co-ordinated project and design brief that addresses a variety of strategic objectives, projects may draw on funding from several areas.  Separate budgets for open space, tree planting, creation of biodiverse planting, footpath improvements and other climate responsive initiatives all contribute to these projects. Some of these funds come from development contributions associated with new subdivisions, whilst others are from general council revenue.

The ‘Grey to Green’ program is an innovative way of achieving more from less. Initially established to ‘encourage’ people into the central city, the program has developed and evolved over time, proving crucial in accommodating significant increases in both the city’s population and density at a notably low cost. In addition to addressing social needs, the program continues to support the realisation of biodiversity and greening targets, such as the Urban Forest Strategy which has a goal of increasing canopy cover from 22 per cent to 40 per cent by 2040. As such Grey to Green is as an adaptable program addressing a range of complex and changing social and environmental issues at the city scale.

The recognition that streets make up 80 per cent of the city’s public realm led to a two-pronged approach of expanding and improving the pedestrian environment, while requiring high-quality activation at street level, supporting the idea that ‘if you design a good street, you design a good city’.

To implement the program an Urban Design subcommittee was established, vetting all public space proposals going forward for funding consideration. Only those complying with the Program’s principles were supported. This inspired a culture of change and a co-ordinated approach across the organisation. Competing interests between Urban Designers, Finance or Traffic Engineers (concerned over losses in parking revenue) were negotiated on the basis of significant long-term savings delivered by the program.  Co-ordination continues to ensure that multiple benefits are leveraged, reducing soiling across different programs.

The Grey to Green initiative has relied on cross disciplinary collaboration from the outset. When Council first started the program, there was some concern from the City of Melbourne’s Finance and Engineering teams regarding the potential loss of revenue through loss of metered parking spaces. Now however there is widespread acceptance that better footpaths and open space are improving property values and that Council is regaining lost revenue through the associated rates. The current policy is that on-street parking will be typically reduced by 120 per year through the program with agreement that council can accommodate that.

Further to internal and external collaboration, Prof. Rob Adams (who has overseen the Grey to Green program since its adoption) writes:
“If we had said in 1985 that ‘We’re going to take 90 hectares of asphalt out of the city’, the initiative would have hit a wall. But if you slowly take it out, it’s like slowly warming up the bath: no one really notices. Thus, Melbourne has slowly allowed itself to be transformed, to a new normal, not in favour of the car, rather people.  We slowly built credibility around managing changes, without significant impact on traffic and visible improvement in amenity. By the time we came to Swanston Street, the traffic engineers were on board and the partnership between the city and Vic Roads was well established.”

What may seem relatively straight forward is a change in strategy requiring a marathon effort by Council in partnership with many agencies and stakeholders.

Public participation is central to Grey to Green’s ongoing success and has been refined over time from Town Hall meetings to a broader engagement approach, extending to temporary road closures in the case of Southbank Boulevard to demonstrate the scale of public space that would be created through the reconfiguration of the existing road. While there was no public consultation on the formation of the ‘program’ as such, projects undergo several rounds of engagement, from concept to delivery, inclusive of one-on-one meetings with residents and local businesses. This helps facilitate exemplary outcomes by informing our understating of community needs and instilling them in the designed solutions. An example of this public consultation through the Grey to Green program is the University Square Master Plan, which involved an extensive four-phase engagement program. Here hundreds of community comments helped to shape Stage 1 of the Master Plan’s implementation, which resulted in the park expanding by approximately 2500m² and reducing asphalt within the square by over 3000m².

Grey to Green has been previously recognised in industry awards, receiving the Planning institute’s Heart Foundation award for promoting healthy cities.  This recognition by the planning profession is a key endorsement of the benefits generated by this program and its projects, including providing access to local green spaces, improved walkability, and social connection.

Individual projects within this broader initiative have also been recognised with awards, commending the leadership of City of Melbourne to undertake both modest and bold transformations of underutilised space and infrastructure.