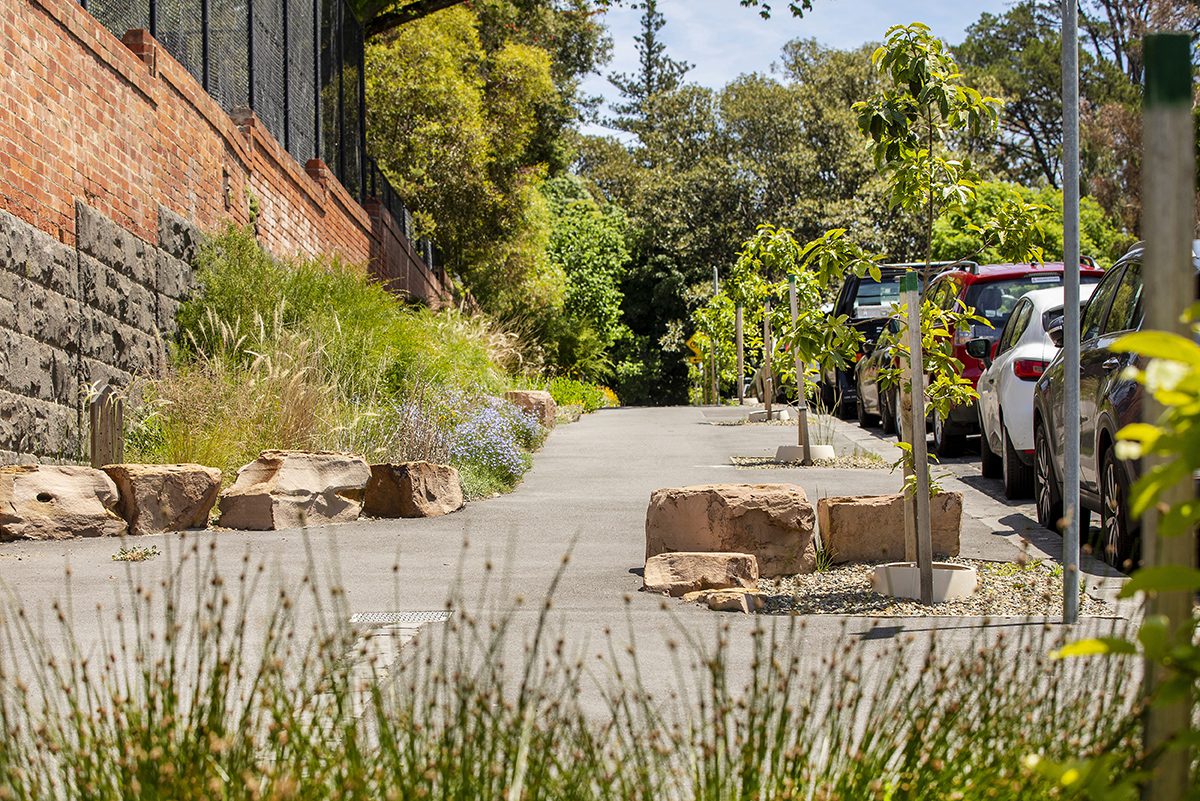 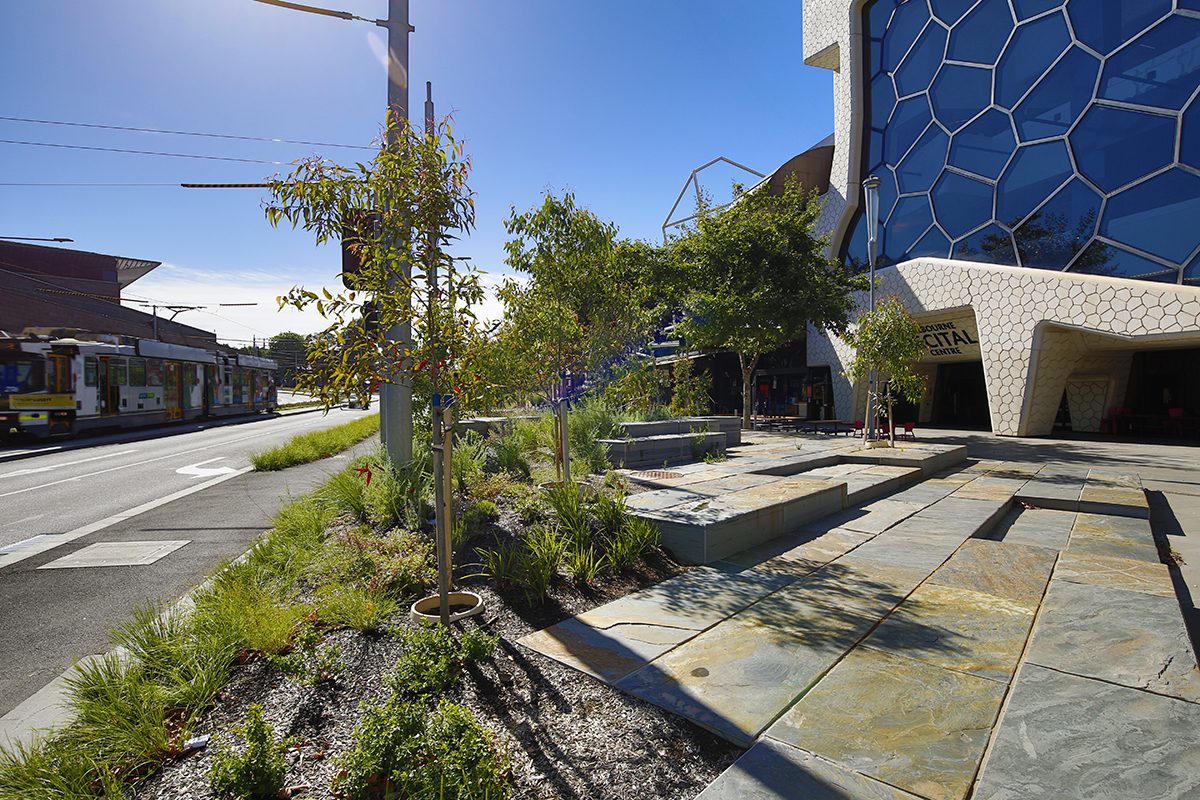 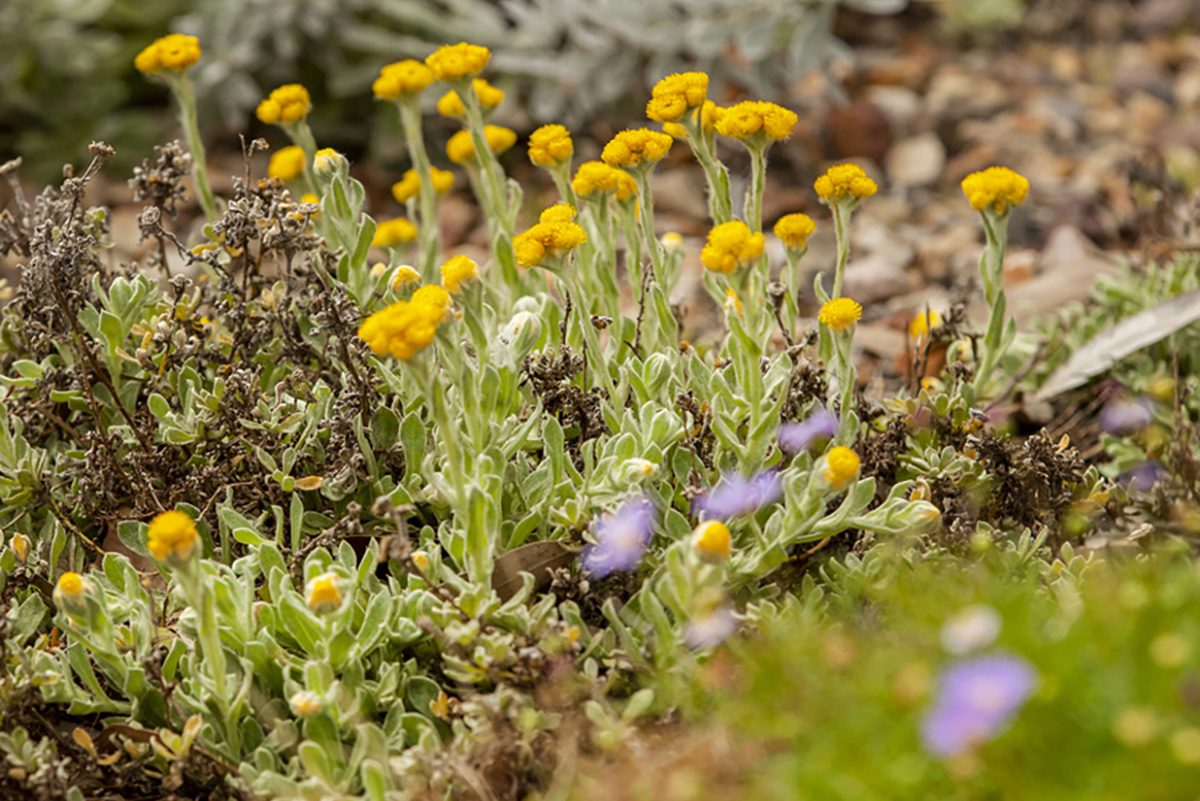 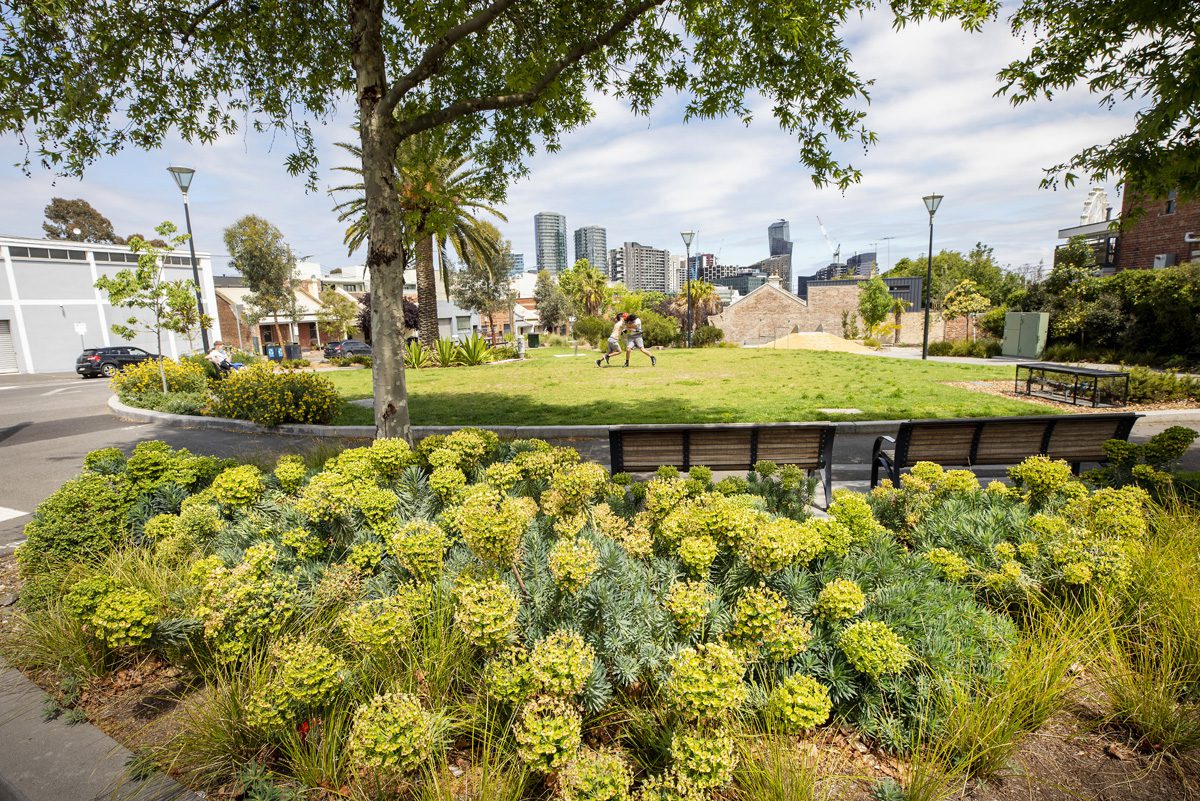 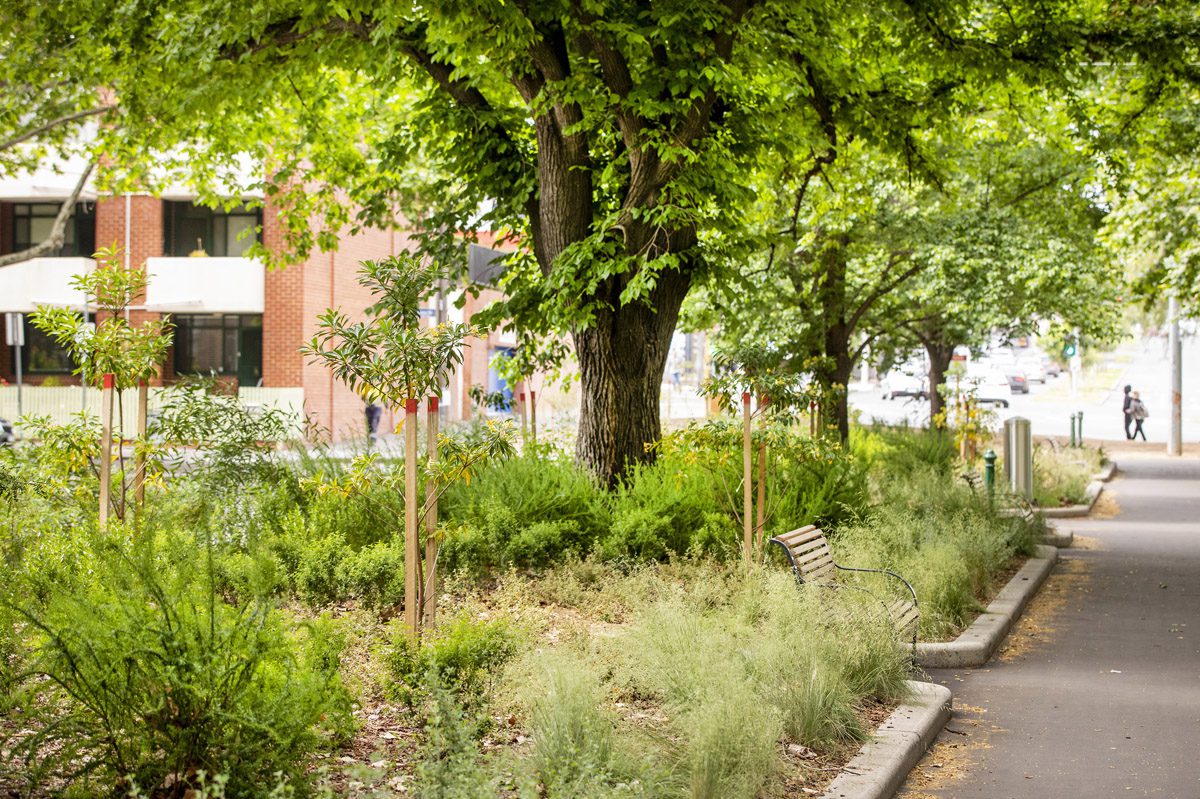 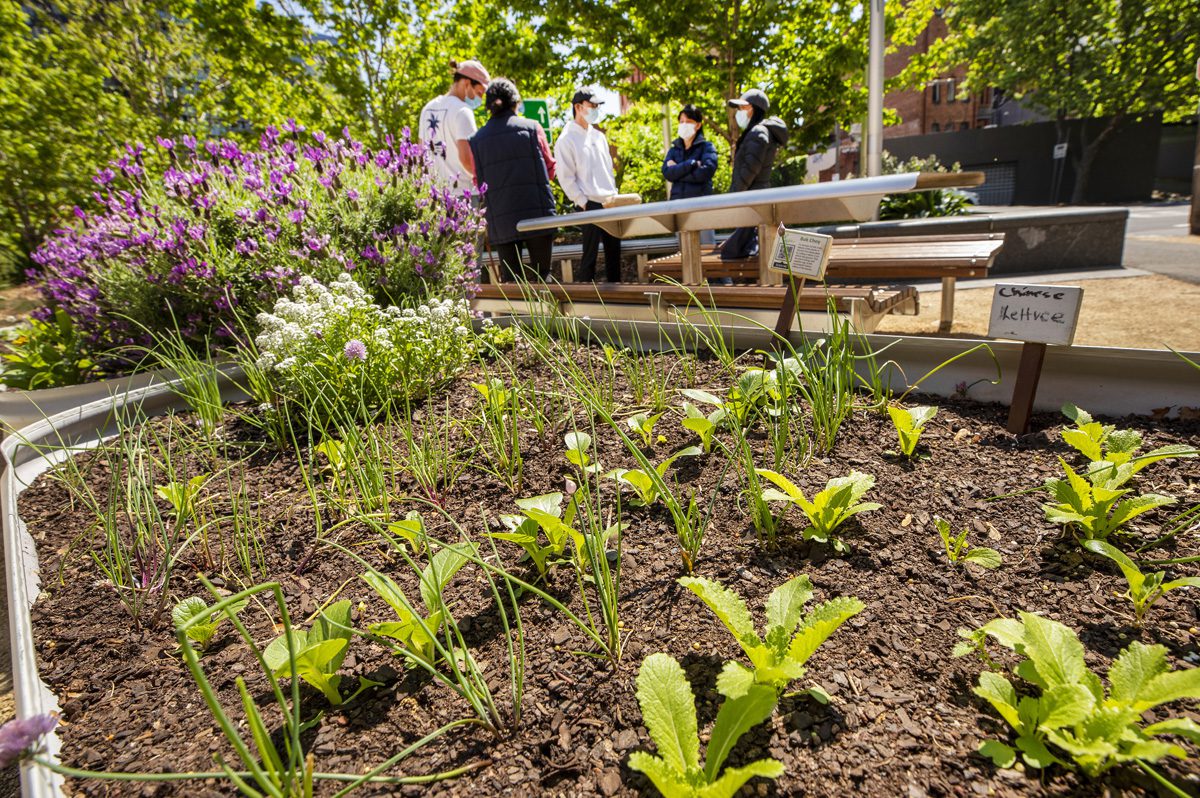 The City of Melbourne’s Grey to Green program is a compelling example of a long-term strategic and incremental approach to repurposing the city to meet the changing needs of its population. By reconfiguring sites owned or managed by Council, including surplus road space, car parks, slip lanes and maintenance depots, the city converted more than 80 hectares of asphalt into diverse public spaces over a 35-year period. Between 2018 and 2022, 12 key projects have been built and are the focus of this submission, representing more than 28000m2 of new pedestrian and green space.

Starting as a series of modest kerb expansions for additional street trees, it has become central to the delivery of Council’s open space and sustainability strategies. The recent suite of projects includes major park expansions through removal of parking, street closures, acquiring adjacent property, linear street parks and conversion of a former school ground for open space. The program continues with numerous future projects in planning and delivery.

Grey to Green was visionary from the outset. In 1985, prioritising people over cars were seen as a radical approach. The program catalysed a growing awareness of climate change impacts and informed the development of the City’s Urban Forest and Open Space Strategies in 2012, Nature in the City Strategy and Transport Strategy.   With Council’s declaration of a Climate and Biodiversity emergency in 2019 the city has cemented its commitment to realising built outcome to affect these strategic aims.

Given its relationship with these strategies, the process of a greener city transformation has been a part research-based and part design-led program. New spaces are integrated within existing public realm through high-quality design responses. From bluestone paving, new council-designed street furniture and lighting, water sensitive urban design, tree and understorey planting and integrated public art, Grey to Green areas appear as though they have always been a part of the city’s public realm. The interventions are largely subtle and small scale, helping knit the city together in a well-choreographed expression of city pride. Melbourne is now a city revitalised by its high-quality pedestrian environments where the majority of trips are made on foot. This has been achieved at modest cost through the incremental repurposing of existing space. In the Open Space Strategy 2012 it was estimated that $700 million would be required for land acquisitions to meet the strategy’s aims for open space provision, however, to date the program has only spent $1,000,000.

Grey to Green is an innovative, cost-effective and environmentally friendly model that is replicable in any city, anywhere. Its success is that it can take place on small or large scales, involving local communities in making the city a better place for people. City of Melbourne’s Grey to Green program methodology can be used by other local councils, governments, or consultants to either preserve or regain public open space and its inherent benefits. By involving multiple disciplines and the public, the program is an exemplar model for ‘good planning’ and promotes socially responsible urban design.

Nature in the city strategy