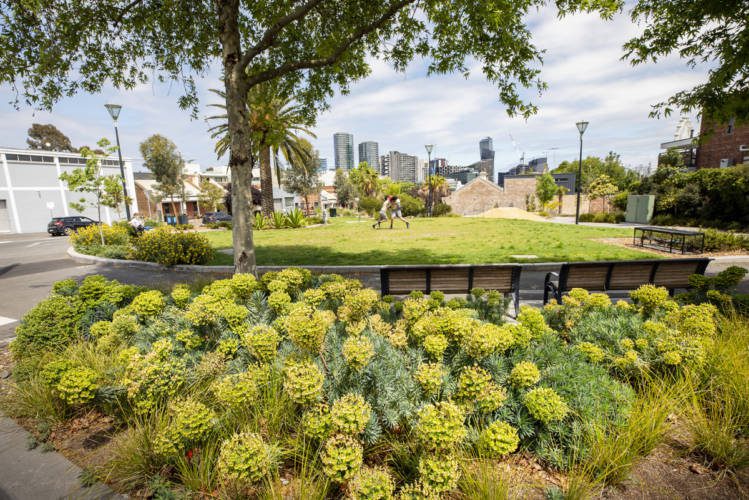 Through the adoption of the Grey to Green program, Council’s vision of making Melbourne ‘a city for people’, ‘a connected city’, and a ‘city that cares for its environment’ is continuously being realised. In the process, biodiversity and climate adaptability have been advanced considerably. The ongoing significance of this approach is evident in the public’s utilisation of key spaces that have resulted from the program. Through Covid we have seen the increased demand on public spaces.

Data captured in the 2015 ‘Places for People’ study further demonstrates the success of the Grey to Green program and how it addresses healthy active principles. This ongoing periodic study documents the consistent increases in public space in the Melbourne municipality between 1985 and 2010, with an increase from 27 Ha to 85 Ha. While a portion of this growth (11 Ha) is due to changes in municipal boundaries over time, the City of Melbourne has gained significant additional publicly accessible spaces by extending footpaths and establishing new public places. In the last decade (between 2010 and 2020) significant public space has been reclaimed and recorded by the Council. These changes will be similarly captured in upcoming Places for People studies.

Recent feedback from residents in the north of the city recognised the value that this program is bringing to the accessibility and variety of public space that is available to local communities.  Gardiners Reserve, Lincoln Square, Hawke and Adderley Reserve and Railway Miller all serve the same neighbourhoods

Beyond 2022 the program of ‘Grey to Green’ continues apace. Projects currently in delivery include the transformation of Southbank Boulevard which is seeing the largest ‘grey to green’ road transformation to date with 2.5 hectares of linear public space soon to be delivered in Melbourne’s most densely populated suburb. The conversion of almost 2 hectares of asphalt for the Queen Victoria Market Renewal, as well as the addition of numerous smaller parcels of land in neighbourhoods across the municipality, continues the incremental creation of additional public space and city greening.

Many recent projects delivered through the Grey to Green approach are demonstrating a shift towards public plantings with a more diverse pallet, and that are informed by deliberate species selection for biodiversity or habitat.  City of Melbourne is partnering with the University of Melbourne in urban ecology research and monitoring of insect and other urban fauna in these landscapes to enable us to measure their success and inform future projects. The Greenline, a major council initiative seeks to revitalise the north bank of the Yarra River Birrarung in the heart of the city. This project is seeking to enhance the ecology of the riverbanks and base line ecological data is currently being measured so that the impact of future planting and other novel ecosystem approaches can be assessed.

The Grey to Green program not only proposes realistic and achievable outcomes, but it also has, and continues to be central to delivering on an innovative and sustainable vision for the city.

Thirty-five years on from 1985, Melbourne is a city revitalised by its pedestrian environments where the majority of trips are made on foot and in a high-quality environment. All this has been achieved at modest cost through incremental repurposing of existing space and infrastructure. Demonstrating the cumulative value of this work, Council’s Open Space Strategy estimated that $700 million would be needed for land acquisitions to meet the strategy’s aims, however only $1 million has been spent on land purchasing land over the life of the program. As such Grey to Green is an innovative, cost-effective and environmentally friendly model that can is both replicable and scalable.

The great success of this approach is that it can take place on any scale, involving local communities in making our city a better place for people. Through evaluating the vision and results of the Grey to Green program, other local councils, governments or consultants can use a similar methodology to either preserve or regain public open space and its inherent benefits. With growing density in many cities worldwide, the need to find increased open space is ever present. The cost of this space is often beyond a local government’s means, so the incremental approach of ‘Grey to Green’ is a perfectly placed methodology to address this dilemma. By involving the expertise of open space planners, landscape architects, urban designers, traffic engineers, and the public alike, the program is an exemplar model for ‘good planning’ and promotes socially responsible urban design.