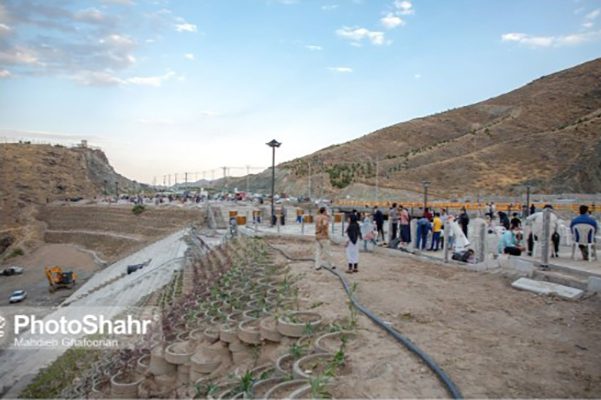 One of the best ways to reduce atmospheric carbon dioxide is to plant trees and afforestation. The immediate vicinity of the southern ring road of Mashhad is a relatively natural and low-density environment that has good air quality due to its proximity to natural lands and tree planting in the form of the Mashhad Green Belt. However, ring road traffic and passenger car traffic have a great impact on increasing the number of pollutants and reducing air quality. Stopping this project and changing its use to a natural-mountain park and carrying out various measures such as restricting car traffic, planting different plant species, and planting trees have caused the air quality of the area to be improved while reducing air pollution sources. The formation of this project was aimed at preserving native plant species, producing and propagating them, and planting trees that are compatible with the climate of the region, which has reduced the destruction of nature as much as possible and has improved the existing landscape. The important thing is that all efforts are focused on the maximum use of natural materials such as stone and wood to be considered part of the landscape in harmony with nature.

The dry climate of Mashhad and the difference in temperature and precipitation in different seasons are among the items considered in the project design. In selecting the type of plants, attention has been paid to the current vegetation, native plants, and limited resources available. This area is full of broadleaf and coniferous trees, which according to the site functions and the need to maintain the natural bed, the planting of tree species in accordance with the architectural performance has been proposed and the project design has been based on the use of native shrub species such as Mastic tree (Beneh), Sumac or Sumaq, Purple and native shrubs such as Barazambal, Yarrow, etc. The native plants have very little water needs that are supplied through rainwater and groundwater. Also, the combination of deciduous and evergreen plants is intended to improve the qualities of the winter landscape and absorb more sunlight in the cold seasons. Due to the arid climate, there is no permanent flow of surface water. However, due to rainfall in autumn and winter, the rehabilitation of seasonal water channels in order to preserve and manage water resources has been a priority in design and implementation. The use of renewable and clean energy such as generating electricity from solar energy for energy efficiency and locating waste stations for recycling are among the other measures. In the design and policy-making process of the project, the interconnection between spots and green-blue corridors in the city and metropolitan scale has been considered.

The former southern belt project with extensive explosions in the heights and excavation in the area to facilitate road construction operations and pave the way for vehicles has caused irreversible destructive effects on the natural bed of the southern heights of Mashhad while changing the topography of the land. This project prevented the continuation of the excavation process in the highlands by stopping the road construction operations and changing the traffic performance of the area. Preservation and restoration of the local natural have caused in the policy-making process and definition of proposed activities to preserve the topography of the land and natural resources, restoration of damaged bed, especially water resources (canals, springs, etc.) to be considered. In this project, we are trying to protect the city’s environment by making minimal interventions in the natural bed of the heights while creating a leisure space for the general public.

Also, due to the lack of construction in the project, we did not have significant excavation and embankment operations, except for the construction of a flood control dam and the creation of a horse manege in the nomadic area which the soils obtained from the excavation of the dam were used to level the manege area of the nomadic area, therefore, most of the soil did not enter the project site from outside.