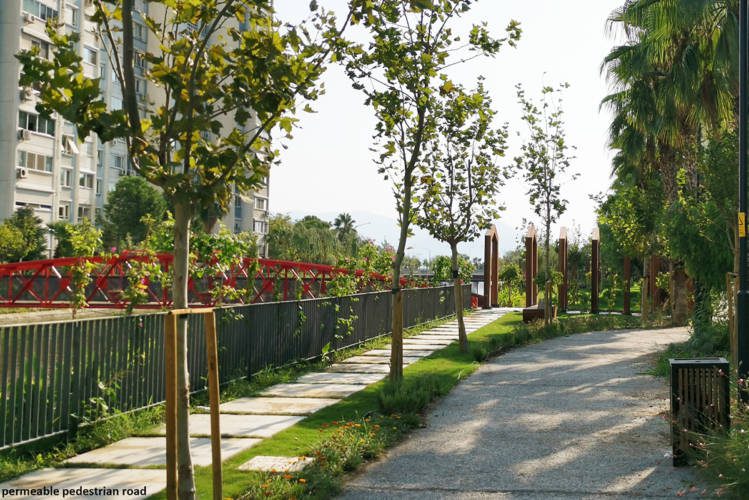 Intensive use of pollinator-attracting plants in the redeveloped and expanded green area in and around Peynircioglu Stream and the effect of pollinator houses are observed and measured during the monitoring process, which was carried out for two years. After recording before-after baseline values during the two-year monitoring process, within the newly planted plants and the increased green space, a high increase in the number of birds and pollinators, which had never been observed in the area before. Similarly, trees in the green area whose baseline values are measured before application measure the number of pollutants and carbon, they hold with measurements that were repeated for two years. Again, in the measurements of the monitoring process of plantation of new trees, a significant decrease in the amount of carbon and the heat island effect was detected. Very high values were also detected in the permeability tests carried out in the project area. In the flood disaster in the same region in 2020, while houses and cars were flooded in the immediate vicinity, it was determined that there was no puddle in the area.

The project has formed the basis for many practices and strategies with NBSs. The plants applied in the project were included in the “Natural Green Project” to be applied throughout the city. Natural Green Project is in order for the city to regain its natural vegetation cover in its parks, local plant species will be used in inner-city practices. The aim is to propagate an approach to landscaping throughout the city that utilizes plants with reduced water consumption requirements and are highly adaptable. In addition, the permeability capacity and green infrastructure of the project were evaluated within the scope of the “Sponge City Program” which aims to increase permeability capacity of rainwater in heavily urbanized areas. The project also pioneered the “Izmir’s Strategy for Living in Harmony with Nature”. With this strategy, Izmir has characterized its essential strategy for combating the climate crisis and becoming a city in harmony with nature as “creating partnerships regarding physical, economic, and cultural plans for the administration of urban and rural areas”. Rather than referring to the urban landscape and rural landscape as two separate parts, this will bring nature and culture together, uniting them within the flow of life.

As a part of the project, the network has been established between cities, which are interested in fighting against climate change through NBSs. In this sense, the project creates a transferability ground between cities that can share their methodology, know-how and good practices regarding nature-based solutions and their impact to the cities.

Within the scope of the project, there are follower-cities to develop their NBS strategies and several workshops are organized. These workshops, to preferably coincide with consortium meetings, are one-day events where Izmir representatives will provide good practices based on their own experiences in the development of the urban plans and implementation of NBSs to participating cities. Additional virtual sessions will be implemented, in between the workshops. These sessions will be set up to involve representatives from all five cities and will serve to clarify any doubts, discuss suggestions and concerns. A dedicated platform (e.g., wiki, mailing list – to be decided amongst participants at the kick-off meeting), will also be implemented between selected representatives, thus ensuring that a platform to place questions, exchange doubts and receive answers is available to follower cities. There is also the creation of the foundations for the cluster establishment. This cluster will also include the follower cities, contributing to the international scope of this cluster. The cluster will be aiming to be an international front-runner in the promotion of NBS in urban planning and the replication of these solutions at a global level.