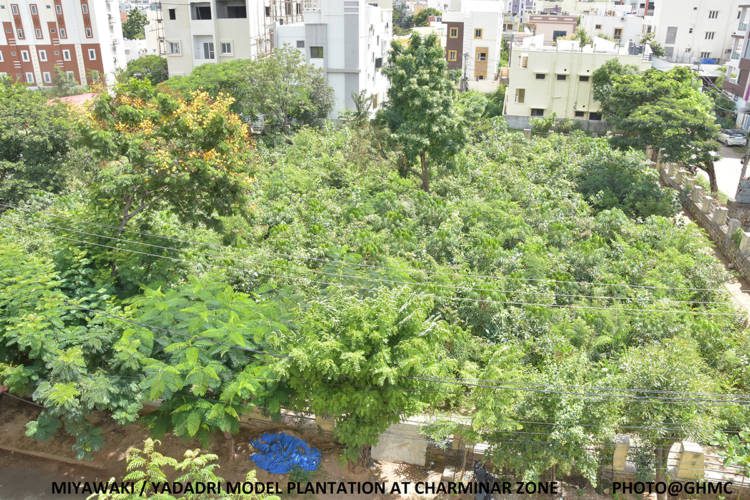 The HMDA has raised nursery seedlings and plantations in Hyderabad to reduce carbon footprint. The details are as follows:

Under the initiative of the Haritha Haram, 24.63 lakhs trees were planted exclusively in GHMC area by the Corporation from 2016 to 2021. These trees start absorbing carbon dioxide as they start growing.  Further, the green waste arrived from gardening and pruning is properly composted to reduce carbon footprint. The carbon emissions and the pollution levels are minimized by greenery taken up under various components.

Hyderabad City is one of the mega cities in India. Urbanization, Industrialization and over population led to increased stress on natural environs and green infrastructure. Accordingly, greenery has been developed to balance the environment.

In this programme trees were planted to maximum extent.  Care has been taken to include maximum number of native species than exotics.  Broadleaved and native varieties like Azadirachta Indica, Ficus varieties, Terminalia varieties etc., have been included in the plantation programme to maintain the diversity in plant species which are suitable to the area and helping creation of microclimate.

Pitting, planting, use of farmyard manure, watering, application of pesticides and protection are important activities of plantations. Nurseries and greenery lawns-maintained need regular watering. (20) million litres per day recycled water of Urban Discharge are used in nurseries, Plantations raised in Sanjeevaiah park, NTR Gardens, Osmania University Urban lung species
About 500 tonnes of Organic manure (Compost) developed from Urban Solid waste is used for Nurseries and Plantations as a manure.The plantations are taken up in the mother soils without using any imported soils.   The enrichment of existing soil profile is done through adding the farmyard manure and organic compost.  Watering is also done through water tankers by obtaining recycled water from Sewage treatment plants managed by Government of Telangana.