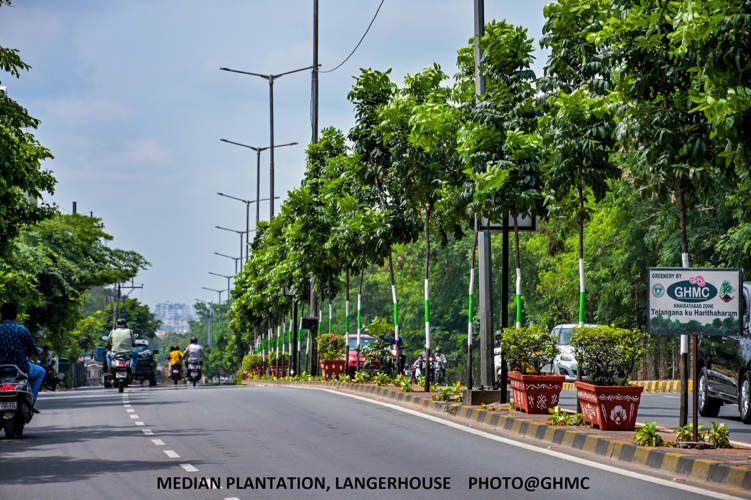 In GHMC, a separate Urban Biodiversity Wing is functioning to take up all greening activities in Hyderabad City including protection of existing greens, development of parks and plantations and other beautification works.  The Officers having knowledge in taking up the works are provided from Forest Department and Horticulture Department of the State on deputation by the State Government.

As per the instructions of the State Government, the Corporation has earmarked 10% of the total annual budget as Green Budget for development of Parks, plantations and greenery under all components by allotting Rs.384.80 Crores for the year 2021-22.

57 theme parks are being developed with a financial outlay of Rs. 134.23 Crores by different themes in the core city area.

The State will deduct one-time annual contribution from the salaries of public representatives and employees working for State government from April 2022-23 for the first-of-its-kind Telangana Green Fund created to fund the green movement in the State. This is innovative financing model for other States/ Nations to follow.

Dense plantations to have 0.75 to 1.00 canopy cover. A plantation method akin to Miyawaki method is employed and results are encouraging in 45 locations with 9.55 lakh plants during the year 2020. 600 ward level nurseries are established to cater the need of the saplings to the residents. Urban Forest Parks with walking and cycling tracks, Yoga area help to relax and rejuvenate

TKHH advocates participation of all stake holders – public and private sector to raise plantations in open spaces in their premises.

Home stead plantations:-   Each house hold family to plant at least 6 flowering and fruit yield plants.
The Telangana State has created “Green Fund” for establishment of Telangana Haritha Nidhi (Telangana Green Fund) with contributions from the salaries of employees working for State and Public Representatives from the financial year 2022-23.

The plantation in the city is being carried out in coordination and support from all the sectors. All the Government employees, Institutional managements and Colony Welfare Associations are involved in the drive.

The planners are designing the roads and other infrastructure by incorporating earmarked areas for greenery development, retaining the existing trees and other greenery to maximum possible extent while designing new projects, made provision of 15% of the area under green cover while sanctioning new layouts and also encouraging the green building concept in the city by corporates in real estate and other industrial sectors.  The green roof concepts are also being embedded in the Urban Landscape to mitigate thermal contrasts and lend a pleasing appearance to urban landscape.

A total of 976 Parks is developed in core city area which includes 919 Colony parks. Out of these, the actual stakeholders who are involved in greening their colonies came forward to adopt these lungs spaces. As a result, 760 Parks were taken up for maintenance by respective colony welfare associations.

The programme of TKHH advocates participation of people of all sectors in Greenery development. The Government has made development of Greenery mandatory for all departments and issued Government orders accordingly.

The local residential communities are actively involved in all planting activities.  The plants required for their homestead planting are supplied by the Corporation at free of cost.  The Colony Welfare Associations also undertook to maintain 760 Colony parks.  Further, they are also involved in in-situ composting in the parks. Open gyms have been provided in 74 locations in these parks for physical fitness activity. 18 Panchatatva parks were developed on acupressure & therapeutic concept.