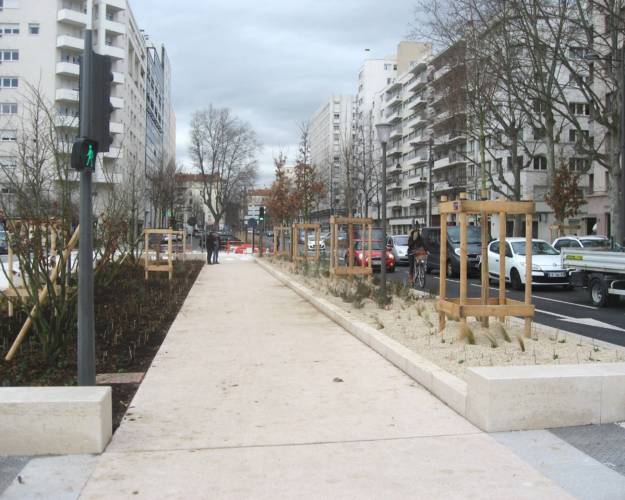 Garibaldi Phase 1: planting strips on either side of the new bike path undergoing final stage of construction in fall 2014. Image credit: Anne Jaluzot

All of Garibaldi Street’s new plantings are done in continuous soil trenches, that are extended under hard landscapes with structural soils wherever possible (eg underneath the cycle path). This ensures that both highway and plant needs are fully met, providing good load bearing capacity where needed while offering extensive amounts of uncompacted root growing environment and a larger than normal water absorption capacity.

One of the underpasses that was closed off as part of the refurbishment was transformed into a stormwater storage tank collecting runoffs from the busway as well as the overflow from the vegetated strips. The water collected is made available via a pump for street cleaning (helping to save drinking water), as well as irrigation timed to boost the cooling capacity of Garibaldi’s plantings. This approach to irrigation creates a powerful nature-based air-conditioning system for Lyon’s CBD.

When exposed to drought and severe heat waves, plants protect themselves from wilting by closing their stomata – the small opening on their leaves – thereby stopping evapotranspiration – the release of moisture in the air.  Evapotranspiration is the most powerful mechanisms by which plants, especially trees, cool the air around them. Shading also plays a critical role, but it is secondary to evapotranspiration.

With its extensive use of trees and attention to provide plants with a significant amount of non-compacted rooting volume and good access to water, Garibaldi Street’s refurbishment was already designed to maximise shading and evapotranspiration. The addition of temporary irrigation during a heat wave provides the added bonus of guaranteeing optimal performance when the city needs it the most. To achieve this, tensiometers, micro-dendrometers and thermometers (including globe thermometers) are dotted through several sections of the scheme to measure respectively soil moisture, plant growth and temperature (including perceived temperature). This set-up allows irrigation systems to turn on automatically during the few days of the year when trees are about to stop evapotranspiration due to excess heat and drought, allowing them to resume abundant moisture release in the air, and therefore cooling. The data collection protocol was also designed to support learning about the impact of this punctual watering process and calibrate the associated automated irrigation system – since no data was available in the literature to tell how much water would be “enough” or how much cooling would ensue. The GLA is now using this data to develop a forecasting model to replicate this approach on future projects.