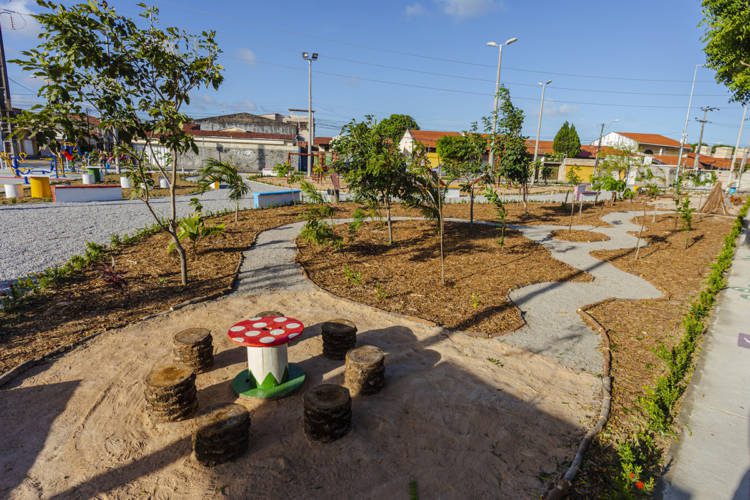 The proposed approach of conserving the natural spaces of the land to be urbanized, reducing the paving areas (and consequent waterproofing of the land) reflects an economy of local resources. Implementing an Urban Micro Park Project costs on average 25% less than a traditional square, which currently totals more than 115,600 USD saved by the city.

In addition, with the new project, local commerce is impacted and new forms of entrepreneurship, such as the sale of food and beverages and rental of children’s toys in the Micro Park area, bring new urban dynamics, generating income and jobs.

Finally, with the recovery of previously degraded land, the value of neighbouring properties is observed, with the emergence of new uses, such as schools, commerce, and comments from residents of the areas who reported that plans to leave were aborted. This indication opens the possibility, still to be explored, for the City to use the recovery of real estate value as a financing instrument with developers and property owners to raise funds that can be reinvested in community and local services.

The Urban Micro Parks concept combines square with naturalized park, presenting elements of the traditional square, already known, and demanded by the population, such as benches, waste bins, sidewalk in the surroundings, while recovering and maintaining the natural aspects of the interior of the land. The degraded area goes through several physical transformations: new sidewalks, renovated street signage, improved public lighting and accessibility, implemented natural spaces with landscaping, afforestation and insertion of natural elements that promote meeting, play, outdoor learning, physical activity and contact with nature. Elements such as trunks and branches (from the pruned urban wood previously sent to the landfill) and the topography and vegetation of the land are used to create new furniture and places for socializing and playing that are more attractive and challenging for children, maintaining the permeability, vegetation and topography of the terrain. Furthermore, as it does not require major capital works, the project is a simple and inexpensive way to expand the network of urban green areas.

Since the project addresses several public policies (Environment, Early Childhood, Requalification of Public Spaces, Waste Management, Public Safety) several local government departments were involved. The conception, community engagement, design, and implementation of the project were carried out by the technical team of the City, using existing public contracts of requalification and maintenance of public spaces and had the financial support (approx. 5,500 USD) from the Urban95 Network to implement the new concept of naturalized parks.

The engagement of the local community at all stages of the project for shared decisions and support in the implementation was essential to the success of the project. After the delivery of the transformed area, a management council was created for the shared administration of the city with the local community, bringing new perspectives of governance and active participation. The local community maintains the space, watering and pruning plants, keeping it clean. City Hall performs more robust maintenance beyond the capacity of the local community. This sharing of attributions generated a greater sense of responsibility for the public space of the citizens since greater care and usage was perceived.

After the delivery of the Urban Micro Parks to local communities, a major transformation was seen in the way the area is used and perceived by the population. The population started to use the space for walking and physical activity, meeting, holding community events and fairs, being in contact with nature, taking care and maintaining the vegetation and the created spaces. There was an increase in adults, elderly and children in the areas. Irregular waste disposal points and urban violence are eliminated from the site.