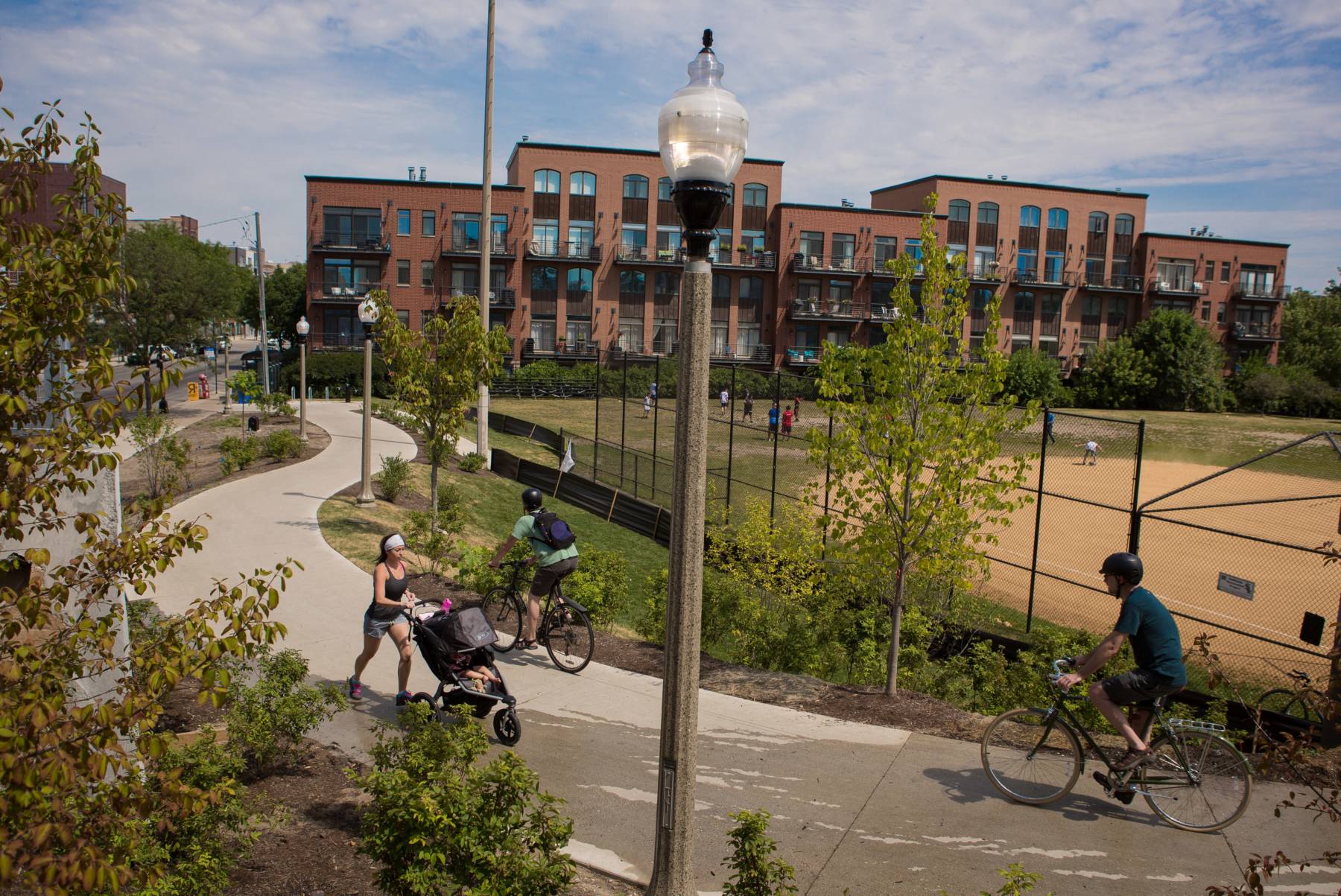 Access ramp to The 606 at Churchill Park. Image credit: Adam Alexander, courtesy of The Trust for Public Land

Only four years elapsed between the main design charette conducted in 2011 and the 606’s grand opening, in June 2015. This is a very short timeframe for a project of this scale. 2011 saw the election of Rahm Emanuel for his first term as the Mayor of the City of Chicago. Emmanuel identified The 606 as a priority project to be completed by the end of his term.

There were significant drawbacks from the speed at which The 606 was finalised. Since completion, the project has received criticism about its contribution to gentrification of the surrounding neighbourhoods. “When the project was being worked on initially, Chicago was just coming out of the [2008] recession and foreclosure crisis. The local low-income housing organisations were focusing on this, rather than securing affordable housing [in the area of The 606]. It wasn’t really until six months before the trail was due to open that the question was raised… People initially couldn’t imagine the transformation that was about to happen…” recalls Caroline O’Boyle. “For any project of this scale, it is essential to consider who it is for and how the people for whom it is intended are indeed going to benefit from the amenity –this might include exploring planning options for retaining affordable housing, looking at employing locals for construction and associated training… but when you move that quickly, you can’t consider carefully enough such options” she adds. The large amount of vacant land found near the park, combined with rezoning, designed to allow higher densities along what was to become an active travel transit route, further worsened the construction frenzy and land value hikes the neighbourhood experienced. One of the positive local legacies of these poorly coordinated zoning, housing and open space planning decisions was a reorganisation of the city planning department, to ensure those leading neighbourhood planning could more easily work closely with the open space team or others leading large infrastructure projects. On a national scale, it has also brought awareness on the impacts of new urban infrastructure parks on social equity, with the latter becoming a growing priority.

Another drawback from the speed at which the project had to be completed, was that TPL did not focus on building capacity among the Friends of the Bloomingdale Trail, the local volunteer-based community group whom had championed the project since 2003. The group could have been reared to endorse a prominent role in community programming and management once The 606 would open. Instead, the Friends of the Bloomingdale were asked to step back, so that TPL could more effectively lead fundraising. Today, as TPL is looking to become less involved in the ongoing community engagement and activities programme associated with The 606, this leaves a gap which the Chicago Park District doesn’t entirely have the ability to fill.