While loathed for the noise, pollution and opportunity loss they generate, expressways running through urban centres used to be sacrosanct. This is no longer. An increasing number of cities around the world have chosen to do away with such infrastructure and turn them into parks. Highway-to-park projects are highly symbolic responses, embodying a paradigm shift away from car-centric development. However, few belong to broader strategies that embrace the links between urban greening and sustainable transport systems.

This is where Greater Lyon’s approach stands out. “Our tree and alternative transport development strategies go hand in hand: the latter frees up space for the former, the former creates the attractive environment needed for the latter. There is no other way we could have succeeded” explains Frédéric Ségur, Head of the Greater Lyon Authority (GLA)’s Trees and Landscape Unit. The refurbishment of Garibaldi Street provides a powerful illustration of these principles, which are also being applied to a wide range of other street types throughout the Lyon metropolis.

Located in South Eastern France, in the Rhône Valley, Greater Lyon is a 1.4 million-resident metropolitan area encompassing Lyon and its suburbs. Garibaldi Street used to be a six-lane expressway running through Lyon’s city centre. It sits between the historic quarters and the Part-Dieu area, the second largest central business district (CBD) in France. Garibaldi Street was remodelled in the 1960s and displays many characteristics from this era, including underpasses that allow cars to bypass intersections combined with pedestrian overpasses, providing a means for safely crossings such infrastructure. Part-Dieu is home to a large shopping mall and an interchange rail station, with high speed rail connections to multiple French and European destinations. It also serves as a multimodal hub used by 500,000 daily commuters. The area was blighted by severe air pollution, as well as overheating during the summer months – a phenomenon that is expected to worsen. By 2080, Lyon is forecasted to have a climate similar to that of Algiers, in North Africa. Little of the existing building stock currently has air conditioning.

The Garibaldi Street refurbishment project fits within a wider initiative aiming to increase the attractiveness of the Part-Dieu CBD. Transforming the quality of the public space found within and around the area is seen as a key lever to attract a new generation of skyscrapers, bringing more jobs to the area. To serve this objective, Garibaldi Street needed to become an attractive, comfortable, pedestrian-friendly gateway. Reconfiguration of the allocation of space between highway users, large scale integration of plants and re-engineering of the drainage systems were the three mutually supportive levers used to achieve this ambition.

From a highway and mobility management perspective, the Garibaldi Street refurbishment project provides striking examples of “road diet” and implementation of “complete street” principles.  All movement functions were brought back to ground level and the space formerly allocated to private vehicles was more than halved. This freed extensive areas for sustainable transport and plantings, offering a contemporary take on the parkway designs pioneered over  150 years ago by Frederick Law Olmsted. 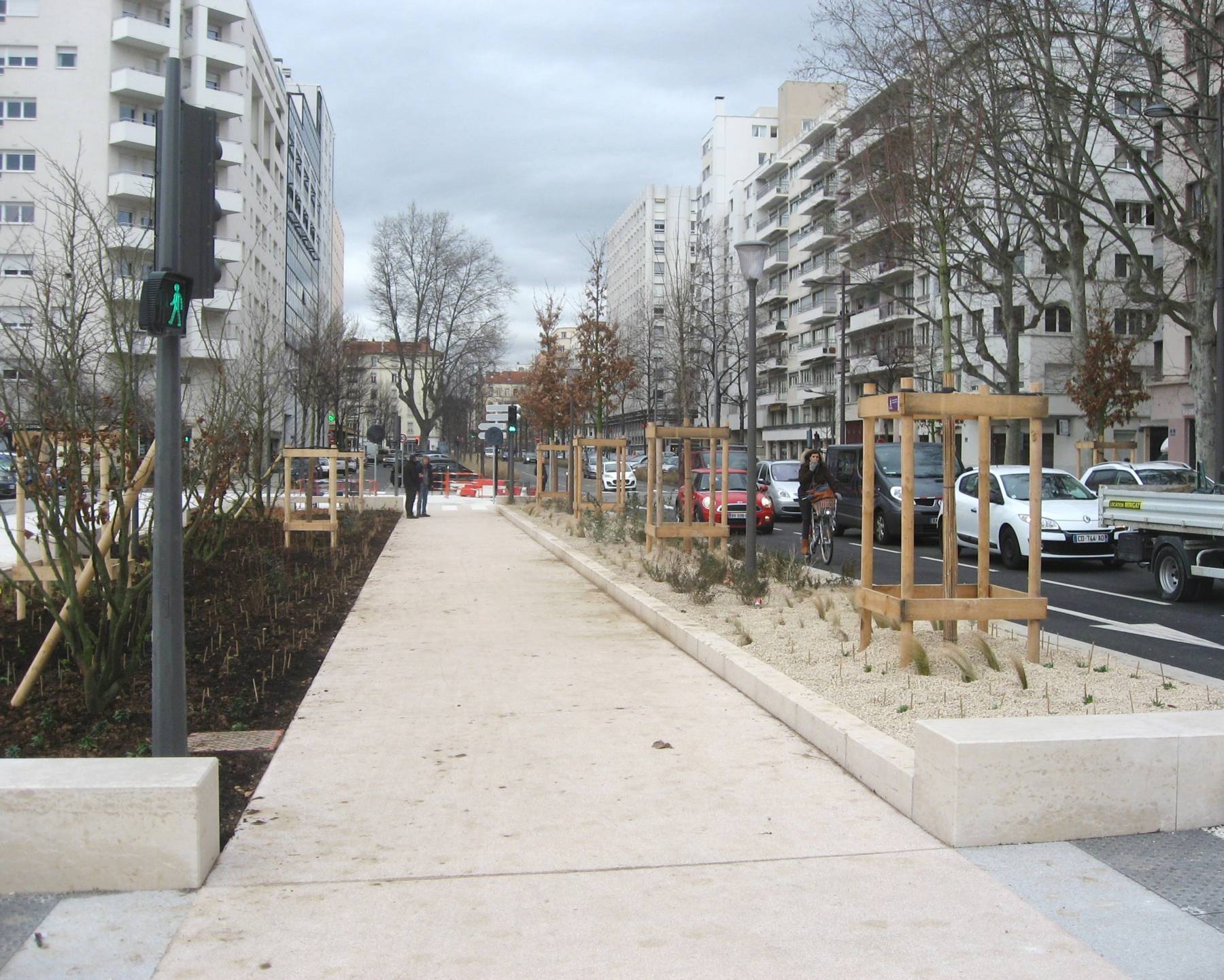 On phase 1 of the project, where on-going monitoring of microclimate impacts takes place: