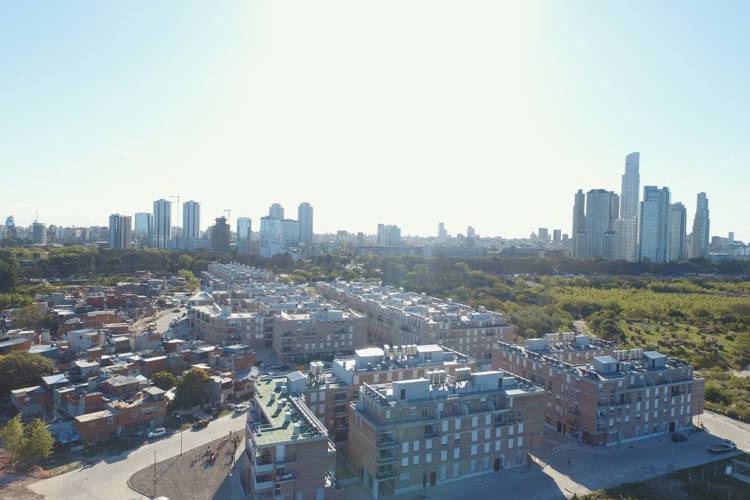 There is quantitative data and analysis that measures the successful initiative.
Regarding the Socio-Urban Integration Process, to date, 611 new houses with solar heaters were built and 550 families have already moved; 57 commercial premises were also built, of which the first moves have already been made; 31 families have moved in the Internal Home Exchange modality; and 2 productive projects have been fostered and enhanced. Likewise, 3 street openings are being carried out, and already 8 improvement actions have developed the quality of airflow and favour the entry of natural sunlight into existing homes. Housing solutions and new streets allowed current works for the connection to vital infrastructural necessities – i.e., water, sewage, electricity and gas- for the entire population. The Costal Edge is expected to be finished in 2023. Finally, in 2022 shall be finished the 3 green public spaces defined during the neighbourhood planning.

Regarding the Environmental Initiative of this process, a total of 11 Environmental Health Discussion Tables were carried out (considering the time of isolation caused by the pandemic). The Environment Month was organized during June 2021, and various actions were carried out: the planting of 82 native trees, trainings regarding the care of the Ecological Reserve and the treatment of waste, the installation of a Green Point for plastic, metal and glass recyclable waste, the construction of a compost bin for organic waste, and the promotion of a focus study on the composition and volume of waste in various homes in the neighbourhood.

The improvements introduced by the re-urbanization process promote several actions that arise from the neighbours. Among them we can find the creation of the Environmental Health Table (Mesa de Salud Ambiental – MSA)  as the initiative of a group of neighbours who identified that the articulation between the areas of government and environmental needs could also be resolved in a specific area that would deal with issues that are not addressed in detail in other participation processes.

The strengthening of the link between the ecological reserve and the neighbourhood was reflected by the organization of educational visits promoted by residents of the neighbourhood, who made the tour accompanied by specialists from the reserve who shared the importance of the wetland and the associated biodiversity. In this way, the relationship is strengthened, and expands environmental awareness, necessary for this coexistence.

These actions have already produced concrete results such as the planting of native trees in the neighbourhood or the commitment to the reserve to generate training in trades and habits of caring for the environment. But the most important thing is that they were not the product of a government policy, but rather arose from the enthusiasm and contagion that the re-urbanization process came to strengthen.

This integration process has proved its strength, resilience, and replicability.  Since 2020 the Ministry of Human Development and Habitat and the Housing Institute keeps regional talks with several Latin American cities, such as Mexico, Medellin, Montevideo, Lima, La Paz and Sao Paulo, with regards to the integration process of vulnerable neighbourhoods of Buenos Aires and the different challenges that the other cities confront within the same topic. Other cities, such as Hamburg and Brussels, have also demonstrated a real interest in this process.

The cities mainly highlighted the importance of participatory governance, the holistic view and the attachment to neighbours’ identity to implement this process in Rodrigo Bueno neighbourhood. They all agreed that these aspects are key to building a real public policy to end poverty with a sustainable approach.

During the talks, it was also important the solutions-for-all that this process has. As it intervenes in a whole neighbourhood, the integration process benefits every neighbour, both in Rodrigo Bueno and the rest of the City of Buenos Aires, as well as the biodiversity in and around the place.

In this regard, as many big cities are going through similar challenges as Buenos Aires, this integration process close to a natural reserve is a best practice to be considered and customized for other urbanization and integration processes.