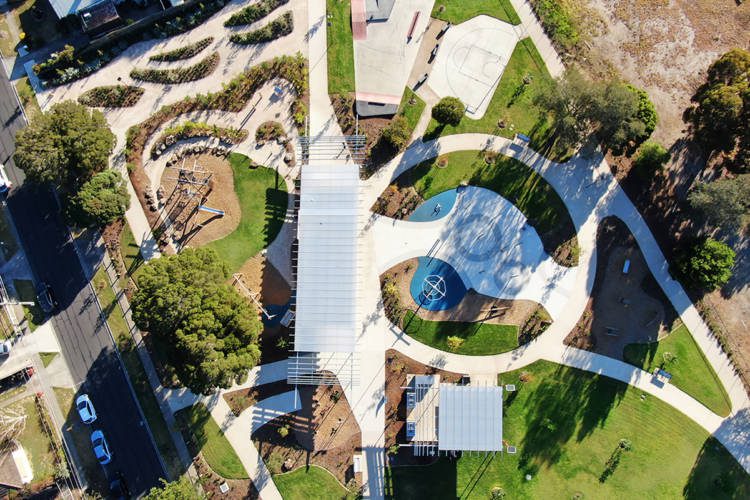 As Sunvale’s landscape matures, it will increase its capacity to cool the surrounding area and support liveability. The increased wellbeing, surface temperature reduction and water retention attributes of the park affect citizens, businesses and wildlife in a positive way and make the area more resilient to the devastating impacts of heatwaves.

There’s a growing body of evidence to the many and varied benefits to green cover in our cities: they help clean the air, make us happier, healthier and more productive. Other studies have confirmed that living near green space can make us sleep better and even improve children’s intelligence and behaviour – despite socioeconomic determinants like wealth and education of parents. Green cover can even influence the price of your home and make for safer neighbourhoods.

Trees and shrubs help to combat rising temperatures and other climate change impacts. A tried and tested strategy is the introduction of more trees and green roofs in urban spaces, reducing surface temperatures by up to 40 per cent.

Urban birds such as Honeyeaters, Magpies, Swallows are now establishing themselves at this reserve and raptors such as the Little Falcon, are now seen regularly flying over this park on their daily flight paths.

As new townhouse development is nearing completion alongside Sunvale and these residents will move into townhouse that front this reserve. This will provide those living in such circumstance all of the above benefits while users of the reserve will benefit from passive surveillance which supports positive perceptions of safety.

The bushfires that occurred in the hills surround Melbourne in 2009 directly claimed the lives of 173 people in Melbourne, with an additional 374 people dying in the heatwave leading to the bushfire. Many of these people lived in the north and west of Melbourne and one reason attributed to this death rate is the lack of tree canopy cover.

Council is an active member of Greening The West (GTW) initiative which is a partnership of local governments in the west of Melbourne partnering to collectively increase tree canopy cover, biodiversity and water sensitive urban design to support liveability and deal with the impacts of heatwaves.

Sunvale is a demonstration of how parks can delivery on all three GTW objectives by reinventing public space and/or infrastructure with natural systems that support humans, fauna and flora.

Greener Spaces Better Places has also given Brimbank a “Challenge Rating” of VERY HIGH, based on Brimbank’s baseline of green cover and growth momentum. This means that over the next decade, Brimbank will face very high challenges to maintain or grow green cover (Where Will All the Trees Be? p.13, 2020).