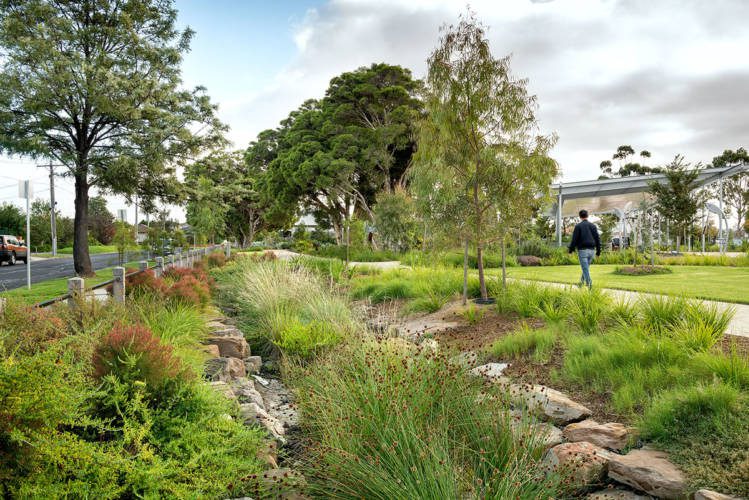 Australian bushfires in 2009 directly claimed the lives of 173 people in Melbourne, with an additional 374 people dying in the heatwave leading to the bushfire. Many of these people lived in the north and west of Melbourne and one reason attributed to this death rate is the lack of tree canopy cover.
Sunvale Community Park has an integrated blue/green infrastructure system that treats stormwater water from surrounding streets and an adjacent townhouse development. All the stormwater is directed to raingardens, treated and then stored underground in a 100,000-litre tank. This water is used for irrigation and to keep the park cool during heatwaves. Council can turn the irrigation before or during a heatwave to create a cool park.

This approach to designing parks that are green and cool forms part of a Council initiative called Oasis Parks where plants and water are integrated to create places of biodiversity and refuge for people and nature.

Council has also planted plants from warmer climates north of Melbourne such as Morton Bay Figs which are expected to grow well as the climate changes in Melbourne during this century. The tree canopy cover is expected at Sunvale to be at least 60% which exceeds Council’s Urban Forest Strategy that seeks a 30% canopy cover overall across Brimbank.

Plants are a vital component of the design of Sunvale as per the following breakdown:

As part of the community consultation, there was a strong desire for a Botanical Garden experience. The planting palette and design have sought to create this experience through a selection of indigenous, native and exotic plants. The following benefits will increasing develop overtime as the blue/green infrastructure evolves at Sunvale: