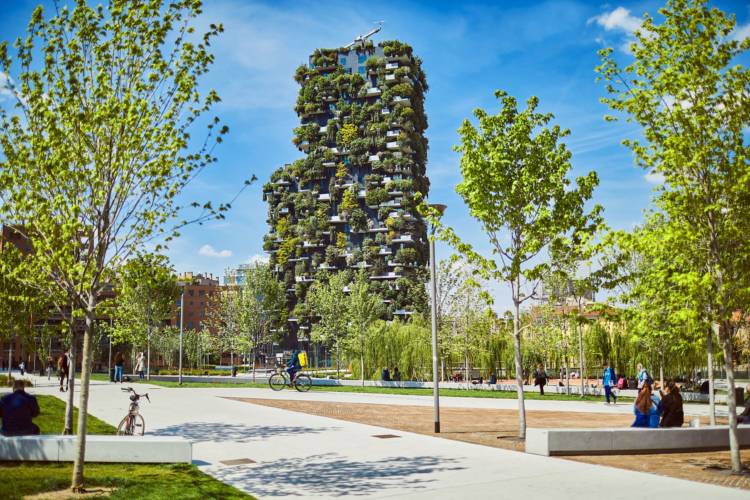 The selection of species was informed by a three-year research project, undertaken with botanists and ethologists, during which the plants were pre-cultivated in containers in a nursery to accustom them to the conditions they would be subjected to, while producing perfectly adapted root systems. The tree selection criteria included a wide range of ornamental, arboricultural, maintenance, and eco-physiological considerations. Ornamental factors included height, density and texture of canopy, duration of foliage, significance and duration of blooming and autumn colour. The type of root system was also critical: it had to be suitable for cultivation in containers. The proposed species were further screened for their resistance to cold and wind, solar exposure, their watering needs, resistance to pollution, disease and pests, tolerance of drought and soil compaction, and ease of transplanting.

The selected species are distributed in response to considerations of aspect, with olives and fruit trees located on the south elevations and leaf-shedding trees chosen for the north so as to limit infringement of daylighting in winter. Changes in humidity and wind exposure as the buildings climb also had to be taken into account, requiring the planting to be specified floor-by-floor.

Planting was carried progressively, as the building façades were completed. Tree planting in the first three floors was carried out in 2012, the trees of the central floors were planted in 2013, and the upper three floors were completed in 2014, together with the planting of all shrubs and groundcovers – ie: two years prior to the first residents of the towers moved in. Year-round tree planting was made possible via reliance on air-pot cultivation techniques in the nursery.

All plants growing on the façades are maintained through centralised management. The part of the balcony that contains plants is not sold to residents and individual owners cannot change the maintenance regime. All external plantings are the responsibility of a single maintenance contractor, who follows an action plan written by the landscape consultant. Every three or four months, gardens are tended from the balconies, and once a year, arborists climb the building on rope to prune trees and check on their health.

The plants are watered by a dripline. The calculation of the irrigation requirements for the planting was based on the climatic conditions of the site and adjusted according to the exposure of the facades and the distribution of vegetation. Sensors detect humidity and activate or halt irrigation as necessary, which stands at 5,700 cubic meters a year on average. The groundwater used for the heating and cooling systems is recycled to meet 100% of the irrigation requirements, which therefore do not negatively impact any potable source. Similarly, the energy needed to pump the water is offset by a solar powered pump system.