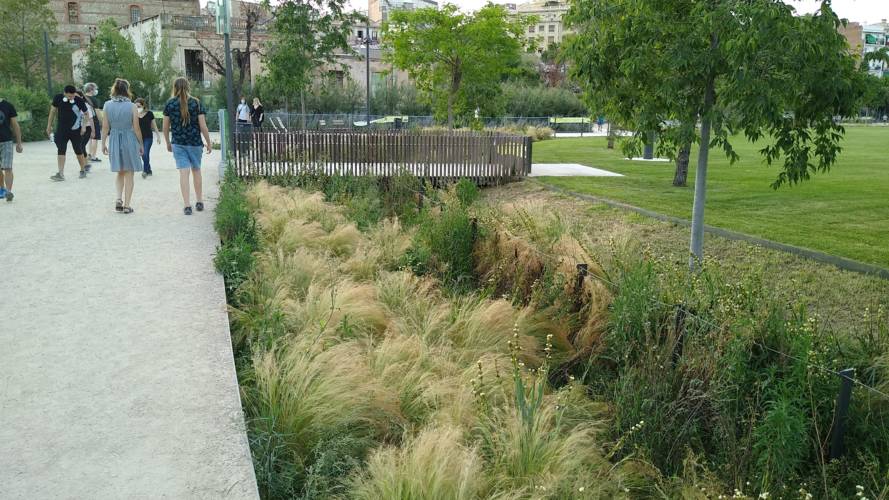 The implementation of the plans and programmes described above have heightened the need for knowledge sharing, to ensure understanding is spread throughout the city administration and beyond. Staff from the City’s Parks and Gardens Department have dedicated time to take part in exchange sessions held three to four times a year, during which people are given a platform to explain their work to colleagues. The Department also holds training sessions for other City staff, as well as for professionals and members of the general public on various topics such as how to design a green roof (aimed at professionals), or how to prune a hedge (more intended for gardening enthusiasts). The positive impacts achieved with the release of the Good Gardening Practices in Barcelona: Conserving and enhancing Biodiversity has led to the publication in September 2020 of a companion good practice guide on sustainable urban drainage and the development of a Green Charter expected to be published next year. These two new guides provide detailed explanations of the design approaches implemented in green corridors – which the City would like to see replicated elsewhere across the city, including within the private realm.

Managing good access to data has been found to be another important factor to succeed in delivering Barcelona’s ambitious initiatives to enhance the presence of natural systems in the city and the amount of associated ecosystems services. This involves identifying relevant indicators as well as the systems best able to enable data collections as well as data analysis, for different users. As Gabino Carballo explains: “Theoretically, we should be moving towards a data-led decision-making process, but this is proving quite difficult to organise because there is always a problem at the point of access…. There is actually a lot of preliminary work you need to do to organise the data in a coherent and cohesive way to use it later”. Enhancing data management to achieve better decision making has also meant developing site-specific management plans, allowing for knowledge to be held closer to the ground.

Whether in its approach to managing existing green space or creating new ones, the City of Barcelona has unarguably accomplished a transformative journey over the past two decades, in spite of a very dense urban fabric. Some of the solutions the City has developed, such as the green corridors, have also emerged in other metropolitan areas looking for effective means to alleviate overheating, public health and air pollutions issues. What makes Barcelona stand out however is the scale over which such solutions are currently being deployed. Other initiatives, such as the superblocks, are more unique, and offer significant potential for replication. Other Spanish cities, such as Vitoria-Gasteiz, have started to implement similar programmes. There is a proposal to introduce something akin to the Barcelona scheme in a six-block area in Seattle and in a new-build scheme in Chicago in the US.