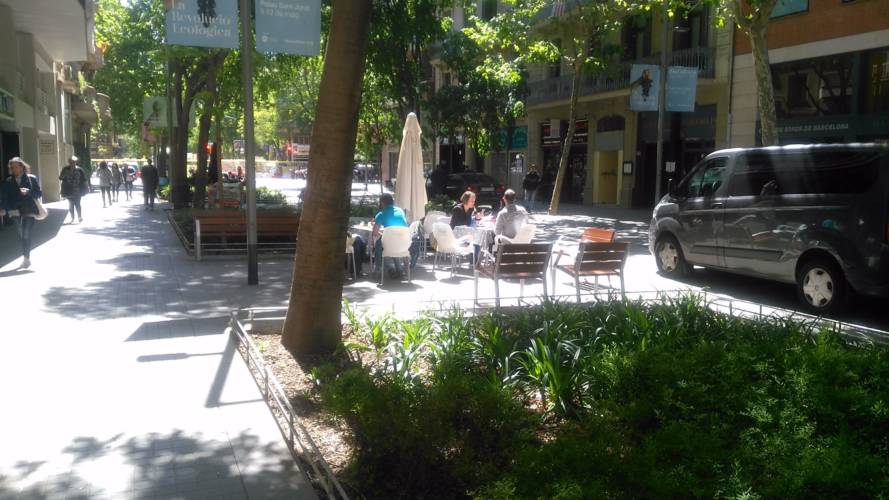 The superblocks weren’t a novel idea. Imagined and championed by Salvador Rueda (former director of Barcelona’s Urban Ecology Agency) in the late 1980s, some first attempts were made in 1993 (Born) and 2003 (Gracià). However at the time, the focus of the street layout changes implemented were primarily pedestrianisation, rather than the creation of a multi-purpose community space. The first true implementation of the concept was in 2016, in Poblenou, outside of Barcelona’s densest neighbourhood, with two additional pilots delivered in 2019 (Sant Antoni and Horta) and six more underway. Salvador Rueda is a proponent of the need to look at cities as ecosystems.

In many ways, Rueda’s vision for the superblocks (or superilles as they are locally known) is the contemporary analogue of Ildefons Cerdà’s plan for the city in the 19th century: reflecting the same holistic perspective and humanistic goals, as well as similar morphology and geometry. The basic idea behind the superblocks plan is to take urban space now devoted to one use (automobile traffic) and open it up to multiple uses (walking, cycling, playing, meeting others…). The idealised superblock is nine square city blocks, three by three.

Within the superblock, streets are one-way, and none of them allow traffic to cross the superblock straight through. Cars are limited to about 10 kmph, not much more than walking speed, so they can mix safely with people. Parking for residents is mostly underground, so there’s no surface area devoted to it. The space thus freed up can be repurposed to enhance resilience to climate change – through the integration of sustainable urban drainage and greater vegetation cover, and better meet the social needs of the population, based on local aspirations.

This video provides good insight into the diverse range of uses and design approaches across the existing superblocks. Some are ‘tactical’, using planter boxes, easy to move urban furniture and paintwork on the ground to test ideas quickly and on a relatively low budget, others are ‘structural’, ie designed from onset for the long term, with curb realignments, creation of new planters directly into the grown etc. Such structural superblocks require much more capital investment. The current ambition, as articulated in Barcelona’s Climate Plan 2018-2030, is to create 503 superblocks that will eventually connect to one another and create over 160 hectares of new green space by 2030. A recent study carried out by the Barcelona Institute for Global Health estimated that the city could prevent 667 premature deaths every year if all 503 superblocks envisaged were indeed created. 503 superblocks would reduce ambient levels of NO2 by 24%, from the current level of 47 micrograms per cubic metre to 36 micrograms per cubic metre.

A decrease on that scale would bring Barcelona’s NO2 levels into line with the World Health Organisation’s recommendations. The life expectancy of the average Barcelona resident could increase by almost 200 days, saving the city €1.7bn a year. The most notable health benefits would come from reductions in air pollution (preventing 291 premature deaths a year), followed by reduced traffic noise and heat island effects (preventing 163 and 117 premature deaths respectively).