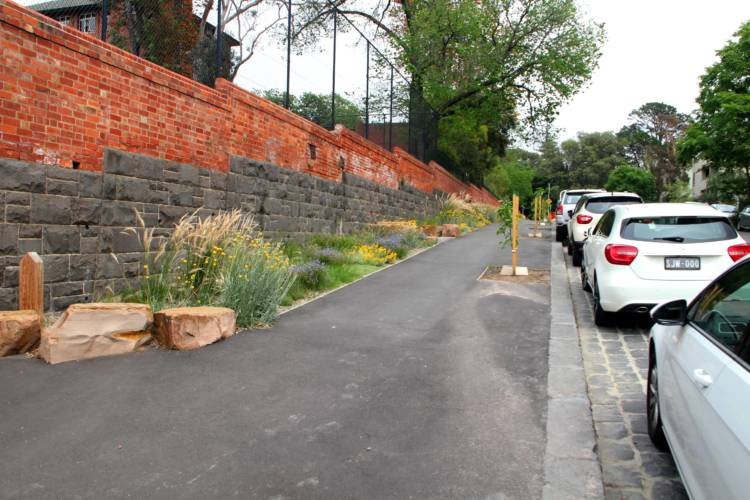 First growing season of the Clowes Street’s biodiversity streetscape improvement project, combining new street trees on the kerbside of the footpath and border planting along the school wall. Image credit: City of Melbourne

Organisational structure also plays a role in the Melbourneā€™s city administration ability to reliably deliver on its urban greening aspirations.Ā  The Parks and City Greening team (about 50 staff) has advocated to have its strategic staff alongside its operations unit, thereby placing full control of strategy development and responsibility for delivery under one roof. It is believed that such integration gives the staff involved in day-to-day maintenance work greater ability to provide feedback and influence the strategic work. Those driving strategy feel they have a good understanding of the reality of delivery, which they credit for their success to date.

A final trait that sets Melbourneā€™s approach to urban forestry and urban greening apart and seems to contribute to its success is its approach to communication. The thorough consultation process undertaken for the development of the Urban Forest Precincts Plans is an obvious illustration of this approach, as well as the development and on-going use of the Urban Forest Visual. The City of Melbourne puts a lot of information in the public domain about its urban greening initiatives in a format that is engaging to lay audiences and professionals alike, including all the studies that inform its work. This effort includes a shift away from working with private consultants and increasingly engaging with universities under consulting arrangements. This allows the city administration to get the research questions it needs answered addressed in a report that is tailored to their needs, while also seeing a peer-reviewed academic publication resulting from the commission. The latter provides an effective way to share the cityā€™s latest thinking and findings with wide-ranging knowledge networks, thereby nurturing a pool of expertise and wider research programmes it can tap into at a later date, something city departments can greatly benefit from and yet are structurally ill-equipped to do.